Indicted for taking $3.2 million in kickbacks 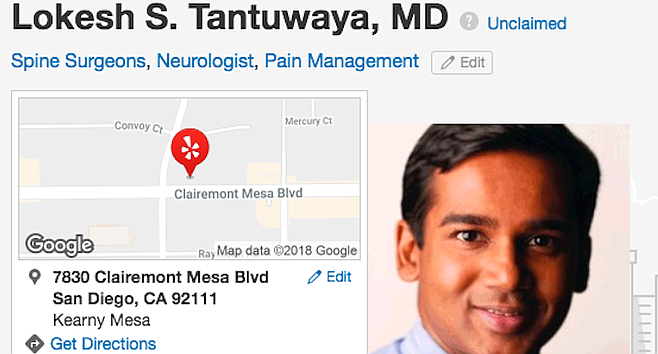 The United States Attorney’s office in Santa Ana announced June 14 that several Southern California doctors have been indicted for taking kickbacks in a scheme centered around Pacific Hospital in Long Beach. Thousand of patients were referred to that hospital for spinal surgery and other procedures that were paid for mainly through the state workers' compensation system, says the federal government.

Neurosurgeon Dr. Lokesh Tantuwaya, who lives in Rancho Santa Fe and practices in several locations around the area, was charged with taking $3.2 million in kickbacks for referring and/or performing $38 million in surgeries at Pacific Hospital. He was originally charged by a grand jury in February with conspiracy, honest services fraud, and using an interstate facility to aid in unlawful activity.

He pleaded not guilty in April and has been ordered to go to trial November 6, according to the U.S. Attorney’s office in Santa Ana.

It sad to see how many succumb to greed to chase the uber lifestyle only to end up in a 10x10 room at the GRAY-BAR hotel. Too bad having the gifts and talent of being neurosurgeon wasn’t enough. Truly a waste.

Make me wonder just how many surgeries were necessary? How many lives were risked over greed? We might never know with certainty but there is no doubt we will certainly question them all.

JustWondering: You raise an excellent point. How many of these surgeries were necessary? The hospital had a specialty in back surgery. These are often perilous. Were people given back surgeries because a doctor wants to make some extra bucks? Best, Don Bauder

Had a back surgeon who used to have an office by a ski lift lol! Probably a good place to generate business..

concernedcitizen77: Now that is taking ambulance-chasing to a new low. Best, Don Bauder

My personal knowledge of Pacific Hospital is a few years old. Seems my late father, who lived in LB, was taken there to the ER two or three times over the years by EMT's. He called it "a hellhole." When I visited him there on one occasion, I came out thinking that I would do whatever possible to keep him out of there if I could. When billed for the first time by the hospital, the bill was labeled something like "fourth and final notice" on each occasion. I don't know if that was pure administrative ineptitude wherein they could not get bills out on a timely basis, or if it was they way the hospital treated all its patients. Just a totally unlovely excuse of a hospital, and its involvement in this scandal isn't surprising at all.

Visduh: It looks like this hospital was either criminally or ineptly run. Best, Don Bauder