How Lao can you go?

Adventurously eating around the honeycomb 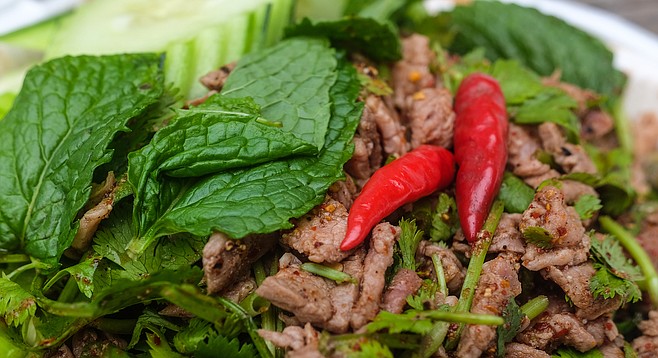 This was my first time in a Laotian restaurant, so I didn’t know what I was getting myself into.

“Actually,” said the guy manning the counter of Bane Phonkeo’s, “a lot of dishes on Thai menus are really Lao dishes.” 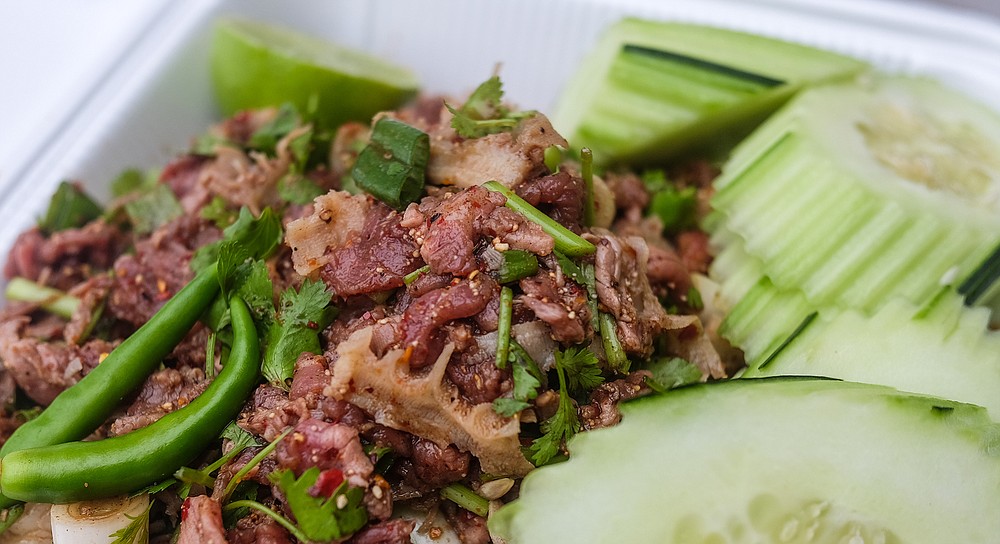 But the signature dish at Bane’s is the laab. I’ve ordered it in Thai restaurants as larb and larp, but here they spell it the same way they pronounce it.

Whichever spelling, Laab is what comes up when you Google search, “national dish of Laos.” At Bane’s they serve the salad of minced meat, chili powder, fresh herbs, and fish sauce with beef, chicken, fish, shrimp, or pork. As advertised on the board, each option features green onion, cilantro, kaffir lime leaves, mint, thick slices of cucumber, and the citrusy ginger-relative, galangal. They’re also dressed with da pak, the house fish sauce made with shrimp paste and papaya.

My friend behind the counter asked which laab I’d like, and suggested the beef. I readily took his advice, but the next question caught me off guard.

“Do you want the beef raw?”

Granted, I’ve only ordered “larb” a few times, but it’s always been cooked. “Is that how you would get it?”

I like to consider myself an adventurous eater, and I’ve eaten raw beef in tartare, so… Yes, I said. Next question.

Well, as he next told me, the bitter style involves beef bile. Inwardly, I shuddered. But outwardly, I said, “I want it how it’s supposed to be.”

I felt bold. He seemed encouraging. The woman actually doing the cooking… well, she seemed skeptical. She’d been slowly shaking her head since I’d agreed to raw beef. But now she tried to steer me back to the lime juice option.

I swear the raw beef was good. I liked it. While I wasn’t nearly as thrown off by the bitter bile as I’d have expected, the interplay between herbs, spice, and fish sauce was tantalizing and bright. If only somebody had thought to mention the honeycomb tripe.

“It’s not really laab without the tripe,” she told me, when I returned the next week. I haven’t developed a taste for the chewy stomach lining. I’d eaten around the tripe, I told her, and I was back for more laab, this time just with the beef, raw or otherwise.

She nodded, with a knowing smile. “You want the beef cooked this time,” she said more than asked.

Most of her customers enjoy the tripe, but she’s willing to leave it out if you ask nicely. And I’ll tell you what, that cooked, lime-juicy, tripe-free dish was delicious. It might be a tad less authentic, but if you ask this new-to-the-cuisine eater, that’s some good laab!