"Put something together and make a change on your own.” 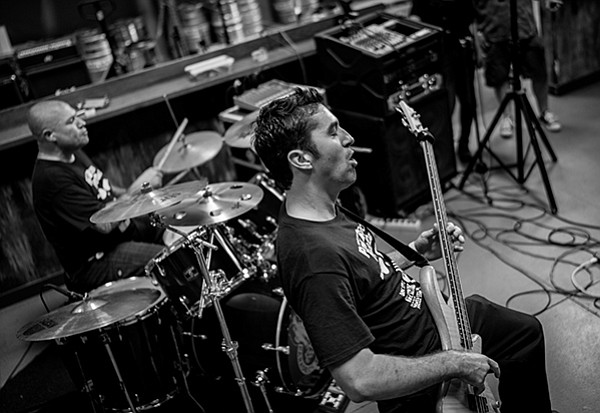 Jason York (Parade of Horribles, Civil Unrest) has been organizing the Punk Rock Food Drive since 2009. The initial event at Bar Leucadian included a performance by his old band, Black Seven, and raised about a barrel of food donations. In recent years, the event has been averaging about eight barrels of donations, and has raised an estimated 128,000 meals since its inception.

“It’s just grown a lot through word of mouth by people who have gone to the show and seen how fun it is,” York said. “It’s a concert that has a raffle, and all the money we can muster goes to the food bank. When you go there and participate, you get to feel like you’re making a difference. That seems to change people’s desire to come out versus some other shows that we book. We could book shows all year long, and we know when we do these food drives — they’re going to be the best-received shows that we do.”

This year’s event will take place at recently opened Echo Room which is part of Midnight Jack Brewery. The stage was designed by Tim Sams (Taken By Canadians), whose business, Craft Sounds, primarily books and hosts shows in North County breweries. According to York, bands used to “play in a corner” there, but now the venue has “one of the biggest and best stages in North County.”

Due to recent success, York is zeroing in on breweries as his primary locations for the food drives.

“We did our last four events at Iron Fist Brewery, and they were all roughly 17,000 to 19,000 meals. So that’s typically where eight barrels and $3000 will get you with meal count. The main difference is that we used to do a lot of shows at bars and 21-and-up places. We’ve moved over to breweries. Now it’s all-ages and we’re not looking to ever go back. That was a major difference in the show over the last couple of years. We’re seeing people we haven’t seen for years, because they couldn’t bring kids to the bars. Now they’ll show up with their kids, their dogs, whatever. The breweries are kind of like the Wild West, and it’s a good thing for our event,” York said.

Even though it’s called the Punk Rock Food Drive, the organizers tend to mix it up. York explained, “The punk rock aspect of it is more the DIY put something together and make a change on your own kind of thing.”

Donate three cans of food or $5 to get into this year's Punk Rock Food Drive, starting at noon. Performers include York's Parade of Horribles, as well as the Dead Frets, the Dodges, Dead on the Wire, Skip Jack, Generator, Shake Before Us, and Fistfights With Wolves. Epic Eatz and Full Metal Burgers will be on hand for grub.