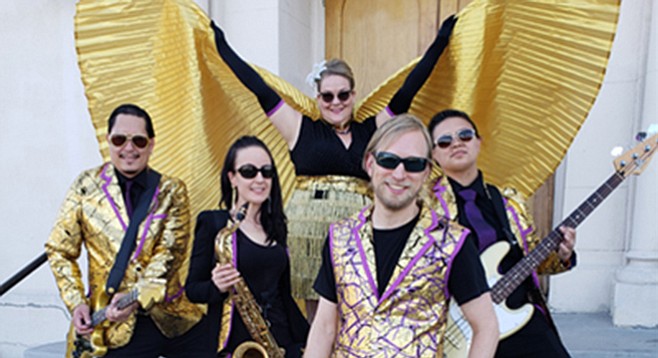 Noticing that there are no local bands mixing '50s rock with the pop buoyancy of the Go-Go’s and the kitschy camp of Southern Culture on the Skids, sax player Emily Connell and her drummer/husband Kevin decided to launch the Babydoll Warriors.

“The sky’s the limit,” says singer Julia McMahon about the mostly female band. “We already have a huge following since we know everyone in San Diego.”

McMahon is only half joking about why she thinks the six degrees of separation principle will help when Babydoll Warriors debuts next week. She’s known for her work with Celtic/bluegrass band Earthwalkers. James Albers has played guitar for local bands Brodeeva, Divided by Zero, Processor, and Vocoder.

Emily Connell plays sax with the Goldettes and Chinese Rocks. Her Plush Rock Art Show of 24” x 24” 3D album covers hung for over a year (2016-17) at Fall Brewing. “That’s where I met James,” says Connell. “I had already written five or six of the songs. I knew he made guitars for a hobby, but I never knew that he played. I asked him if he’d want to be in my new band, and he said yes.”

Connell used to play trumpet in the Optionals, Riot City, and Kamikaze Harry back home in Australia. She writes all the lyrics and melodies for the Babydoll Warriors. “All of our songs have the word ‘baby’ in them.” She says their first record of all-original baby songs is planned for release later this year.

“Space Love, Baby” is about making love in outer space. “Love Bite, Baby” is a one-song, low-budget rock opera about a werewolf. “Baby, Shake Your Golden Caboose” is about love on a train: Well the sleeping car is empty/ Step inside and latch the door/ It’s time to stoke the furnace/ While I yell all aboard.

McMahon says the Babydoll Warriors campy spirit fits right in with the trailblazing spirit of local outfits such as the Schizophonics or the Creepy Creeps. “San Diego is now the city to watch. You have punk, blues, and rockabilly band guys playing with each other. I think this town’s on fire.”