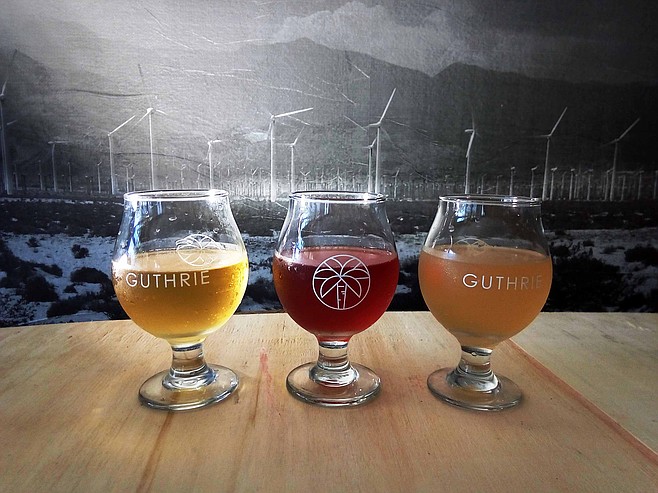 The owners of Guthrie CiderWorks are looking for a little help deciding which of their upcoming cider flavors will eventually make it into bars and shops. To do so, the young Miramar business has decided to open its cidery to the public.

“We should have done this a long time ago,” notes Horacio Devoto, who co-founded the business with his wife, Sara. “There’s a reason why most people — everybody really — starts with a tasting room,” he says. In addition to higher retail profit margins, “It’s how you get introduced into the community, it’s how to make connections, it’s how to get marketing out there.” He jests, “We like to do everything upside down.”

Guthrie bottled first, releasing a dry English-styled cider last fall. That was followed by regular distribution of a semi-dry in kegs this February. But as their cider began to appear on drink menus and store shelves, the Devotos realized their new fans lacked the customary physical location to satisfy their curiosity.

“People kept asking, where can we get your cider?” says Sara Devoto, including distributors, and people showing up to their industrial park space hoping for a taste. The couple assembled a simple bar top, and established Thursday through Saturday hours beginning Friday, June 22nd, with additional days to follow as warranted.

But another ambition factored into their thinking. They want to release new product lines and hope visiting cider drinkers will reveal which flavors are likely to perform best in distribution.

“We’re exploring different types of style,” says Horacio, “playing with different flavors.” But, he adds, “We haven’t had any good way of getting feedback.”

At home, the couple has experimented with dozens of infusions, involving fruits, spices, and teas, and have settled on eight new flavors they like. Along with the traditional dry and semi-dry core ciders, two will be on tap for the tasting room opening: a smoky cherry and cardamom cider, and a rosé-like dry cider blended with raspberry and orange. Future flavor combinations include mango orange, caramel coconut, and strawberry black pepper. In a nod to Horacio’s Argentine heritage, they’re experimenting with creating a mate cider.

As the small Guthrie team settles in for its second year, they’ve signed with a new distributor and have an eye on mobile canning runs sooner than later. “We want to get more variety out there,” says Sara, but first, they’ll get to know local cider fans to see what clicks.

“Whether we do bottles again or get into cans,” says Sara, “what’s popular here will make it onto the shelf in some format.”

My money’s on the strawberry and black pepper.