Even some redacted portions must be restored 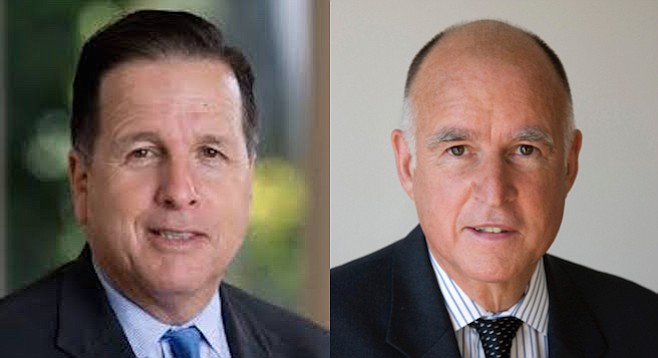 The California Court of Appeal in San Francisco today (June 19) ordered the California Public Utilities Commission (CPUC) to turn over communications between it and the governor’s office as the the agency came up with a plan to shift huge costs of decomissioning the now-shuttered San Onofre nuclear plant to customers, not utilities shareholders. (The plant is about 80 percent owned by Southern California Edison and 20 percent by San Diego Gas & Electric.)

In a long-running legal battle, San Diego attorneys Mike Aguirre and his partner Maria Severson have demanded copies of the communications between the agency and. the governor’s office on this topic. The two lawyers appealed a decision by the trial court. The appellate panel found yesterday, “the CPUC shall produce every document, with any attachment(s) over which it asserted the deliberative process privilege…with the redacted portion restored.” The CPUC did not demonstrate “a clear overbalance” on the side of confidentiality, said the appellate panel.

However, the court said that the CPUC “may continue to withhold the 16 records over which it asserted the attorney-client privilege as [Aguirre] has not timely or convincingly disputed [CPUC’s claim] that he waived his request for these 16 documents.”

Background: the former head of the CPUC, Mike Peevey, came up with the idea to soak the ratepayers, and passed it to Edison. This was of dubious legality. Peevey is a longtime friend of Gov. Jerry Brown; Aguirre and Severson are convinced that the governor may have been calling some of the critical shots in the arrangement. The CPUC adamantly refused to turn over documents related to its communications with Brown. Now it will have to turn over some of them.

Historically such situations in the past produced little actionable facts, but it does provide intrigue and speculation as to why documents are being withheld. I suspect some, including myself, will always wonder if the “smoking gun” document remains concealed even with the Court’s order.

I am convinced when so called “officials” are tainted by money, political power and arrogance their decisions are rarely in the public interest. We already know this IS the case in the SONGS decommissioning.

Sadly when no one is held accountable, or penalty enforced personally, these illicit behaviors are only reinforced. Indeed, others are emboldened to create even more elaborate schemes to defraud.

JustWondering: Yours is a perceptive observation. It's possible that a smoking gun could be concealed in the documents that CPUC does not have to hand over. That is troubling.

You are correct that the SONGS decommissioning process was shot through with corruption. Aguirre and Severson have done a commendable job bringing this to the public's attention. Best, Don Bauder

The "good people of California" had a good dose of Jerry Brown as governor in late 70's and early 80's. He slunk (or should have) out of office with the nickname "Moonbeam" which was a label of derision. That should have been the end of him politically. But no, he arises from the dead and is back as governor again, only this time he isn't just a flake, he's a crook. Just what he plans to do at his age, and just what sort of legacy he wants to pass on, isn't clear at all. But the level of arrogance he shows to the state and its taxpayers has never been equaled. His legacy, whether he likes it or not, will be on a guy who left the state in worse shape than any governor before him, worse even than his father.

You are inaccurate and using fake news fake facts regarding the origin of the name "Moonbeam"....The nickname was coined by Chicago columnist Mike Royko..who worked in one of America's most politically corrupt cities and states (Chicago, Illinois) where Mayor Daley Sr formerly ruled and where 3 or 4 Governors have landed in prison for dirty deals...

Getting back to the origins of "Moonbeam"...Royko labelled Brown in a column in the 1970's because Brown proposed launching California State communications satellites in California...about 20+ years before the rest of the country and world was ready for it for consumer uses. Nowadays, communications satellites for government and the private sector are commonplace...look at your phone...It could not run with out satellite and wireless technologies. Ditto your TV and other electronic devices. Anyways, Royko caught some flack for the Moonbeam column...Royko met and talked with Brown and decided Brown was more of a visionary unusual type of Governor that you don't see very often especially in the political cesspool of Ilinois...Long story short...Royko wrote another column apologizing for referring to Brown as "Moonbeam" and told others in the journalistic profession and public that he would prefer that they do not use the term regarding Brown...

The only ones who use the Moonbeam term anymore are those in the Fake Fox, Fake Right wing media who don't have a clue about the origins and meaning of the author of that term and results...They are too lazy to do real research and journalism and just repeat bogus talking points and unhinged, long debunked conspiracy theories.. The fake pants on fire liars right wing media often takes things out of context, does not fact check, makes up its own alternate reality "facts" that cannot pass fact checking

concernedcitizen77: I agree with you on Fox. It is a disgrace to journalism. I must say, though, that I watched part of the U.S. Open that Fox televised, and during the period in which I watched, there were no ads. Best, Don Bauder

don bauder Yeah, I believe you can thank/blame Rolex for that. The problem is with no commercials, that means we have to listen to more of Joe Buck's blather. Personally, I consider him to be the worst golf commentator I have ever heard

concernedcitizen77: I did not know that Royko was the first to pin the name "Moonbeam" on Brown. And then that Royko apologized in a subsequent column. Best, Don Bauder

Visduh: Brown a close buddy ofd the notorious Peevey. How much of the "soak the ratepayer" strategy at SONGS was cooked up by Brown, or by Brown and Peevey together? Best, Don Bauder

The CPUC should be investigates as a RICO organization. They have done nothing that has been in the interest of the public. They are a classic example of a corrupt organization. All past and present Board members should be prosecuted and all employees should be fired.

AlexClarke: Particularly during the long Peevey reign, the CPUC cared far more about stock performance of the three investor-owned utilities (Sempra, Edison, PG&E) than about fairness for ratepayers. That's how rates at publicly-held electric utilities such as SDG&E and Edison became among the highest in the land.s (SDG&E's rates are consistently the highest.) This does not seem to have improved under Peevey's successor. Best, Don Bauder

Yes what? You were close but not correct? The four (not three) investor-owned utilities are SoCal Gas, SDG&E, SoCal Edison and PG&E.

I am unaware of any theft or personal enrichment by the governor. I seem to recall that he once refused the luxury lifestyle of the governor's mansion. That humble lifestyle continued when he was mayor of Oakland. My sources tell me that we have a very unusual budget surplus despite the recent recession, and that at the governor's (unpopular with other politicians) insistence. Please inform us of what he has stolen.

swell: I doubt if Brown stole money for his own gain. Hopefully, the release of documents will shed light on what role he played in the fleecing of ratepayers over the SONGS decommissioning. He is a long-time buddy of Peevey, who sketched out the plan to screw ratepayers. Best, Don Bauder

Maybe he did it for his sister? She WAS on the CPUC and now she is on the board of SDG&E (Sempra), if I am not mistaken.

dwbat: I doubt that there is a board of SDG&E -- it is a wholly-owned operation of Sempra, the parent. She is on the Sempra board. Best, Don Bauder

You're repeating what I already said.

And your point is???

Yeah, not ever a CPUC Commissioner, if I am not mistaken.

danfogel: Gov. Brown's sister has never been a CPUC commissioner, to my knowledge. Again, I could look that up, but... Best, Don Bauder

don bauder, Yeah, I know. I was just trying to be nice to someone who obviously is deficient in accuracy.

Wabbitsd: I believe she is still on the board of Sempra, but I am in too much of a hurry to look it up. Best, Don Bauder

Great news for SoCal rate payers. Since the CPUC decided (again) to side with the Utilities that San Onofre over its "redline" destroying it's four (2 per reactor) almost new replacement Steam generators, everyone has been asking why ratepayers should have to not only pay SCE (and SDG&E their minor 20% partner) but also for their lost profits! I predict that these documents will explicit the Governors Office with the CPUC decision and the will then lead to a far better settlement for ratepayers if not possible jail time for some of the key figures in what I call #SanOnofreGate (The hashtag that allows you to keep up to date on the ongoing investigation into the multi-billion $ SCE-CPUC ratepayer ripoff).

I am also interested in why the CPUC “may continue to withhold the 16 records over which it asserted the attorney-client privilege as [Aguirre] has not timely or convincingly disputed [CPUC’s claim] that he waived his request for these 16 documents.” This statement leaves much unanswered and will only cause SoCal ratepayers to question [again] what is being withheld from them and WHY?

CaptD: In the original item, I gave you the reason the court decided to permit the CPUC to retain those 16 documents. Question: Is a smoking gun hidden therein? Best, Don Bauder

Brown the Jr is actually rated as an outstanding Governor both his first time around(ran huge surpluses and moved the State forward to many boom decades) and the 2nd Time around where Brown turned huge deficits into surpluses. Brown is known as a fiscal conservative and a social liberal. Brown's budgets were tighter than Reagan's if you look it up. Brown was seen as one of the only leaders who could work with the legislature and govern California.....CA is much better off than before Brown was Governor the 2nd time around and most in the know admit that. See Bloomberg "CA Will Miss Governor Brown" written by a Republican who voted against him..https://www.bloomberg.com/view/articles/2018-01-11/california-is-really-going-to-miss-jerry-brown

concernedcitizen77: That is a switcheroo for the author of the Bloomberg piece. Best, Don Bauder

That said, I would love to see those PUC documents about the utility settlement and negotiations...

If something is not on the up and up regarding public officials and negotiations, then the public has the right to know no matter who it is about...

concernedcitzen77: Yes, the question is "Why???" the governor's office has fought so hard to keep these documents secret. For that matter, why did he veto the CPUC reform bills that the legislature handed him? Best, Don Bauder

Mike Murphy: If they have destroyed documents, why have they fought so strenuously not to turn the remaining docs over so the public can see them? Best, Don Bauder

part of the smoke screen?

Murphyjunk: It smacks of a smoke screen. Best, Don Bauder

Thomas Weller: I agree that prosecuting Peevey for the Warsaw caper is a good idea. Keep your fingers crossed. Best, Don Bauder

Don: The figure owed for their negligence, if I remember correctly, is about $1800 per ratepayer (every account holder) just so your readers have some idea as to the amount of money we are discussing here. I also believe the Utilities were going to "finance" that with interest so everyone would end up paying an extra $11 bucks per month over the next 10+ years, which is not trivial amount for many ratepayers!