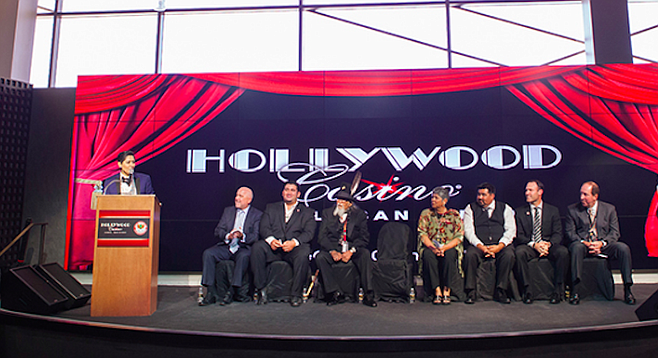 The Jamul Tribe casino is advertising more than 30 job openings, which seems to dispel the notion that the casino is imploding.

At the end of May, the Penn National Gaming Corp., which owns the Hollywood casinos chain of 27 gambling properties, finished handing over management of the casino on Campo Road, Highway 94, about 15 miles from Chula Vista and 20 miles from downtown. The investors handed the casino, built in 2016, over to the Jamul Indian Village Development Corp.

“The casino project is continuing to thrive, and despite the management transition, there have been absolutely no layoffs,” according to Jamul Indian Village chairwoman Erica Pinto. “The casino continues to add members to its growing team.”

In May, when the Hollywood sign came off the casino building – about 30 miles east of downtown San Diego, right off the Interstate 8, County Supervisor Dianne Jacob took some shots at the tribe and casino on her Facebook page, saying the casino has been “a disaster from the get-go.”

How in the world do the Jamul Indian Village folks think that they can do any better than Penn National in turning around this casino and making money off it? They’re dreaming #hollywoodhorrorshow

But the tribe disagreed with predictions of doom.

“This is a natural next step toward economic self-sufficiency for the Jamul Indian Village. It represents an important step toward our long-held goal to manage our own casino,” Pinto said in a written statement. ”We are proud that the casino has been such a success that we can make this transition so soon after the casino opened.”

The casino officially opened in October 2016, after Penn subsidiary Hollywood Casinos built the $460 million 200,000 square-foot building, . Since then, the casino’s operators have paid more than $5 million to the state and county for road improvements, along with annual payments to the County Fire Authority and $100,000 to the California Department of Fish and Wildlife.

It took more than 15 years to get the government permissions and private funding to build the Casino, which occupies four of the tribe’s six-acre reservation in East County. Jacob has been the fiercest of its critics.

Penn took a write-down on the casino, according to its filings with the U.S. Securities and Exchange Commission in March. The publicly traded company reported the Jamul casino changing hands left them with about $48.5 million in unpaid debt.

I was in Parkway Plaza not long ago and representatives of the Jamul tribe were there handing out bus schedules for their buses. According to their handout there are several "park and ride" locations so that you won't have to drive to their casino.

bring in the suckers any way they can

Many of the local casinos have busses.

Yes they do rounding up the suckers to feed the great beast.

I notice over last weekend they added a kiosk with hand outs with the shuttle pick up at parkway plaza by Dick's sporting goods .

After overcoming all the complaints of neighbors and those who have to share highway 94 with the casino-goers, don't expect the band to admit they made a mistake. That monstrosity could and maybe should be a monument to the excesses of Indian "gaming." Erica Pinto is absolutely amazing for her chutzpah, and will continue to proclaim the place as a success, even when/if it shuts its doors for good.

While I don't have a very high opinion of Diane Jacob--or any of the other supervisors for that matter--she sure got this one right.

I have been to that casino one time (not to gamble--just to check it out). It is a nice place. A nice, big place. A nice, big, empty place. Granted, I was there on an afternoon visit, but let's put it this way. You would have had no trouble finding any gaming machines that were available. That casino also does not have a buffet, as they are about the only casino I know of that doesn't have one.

And...Penn National took a financial bath on that casino. I don't see how it will be any different with the local tribe running the business.

If the low-end slots paid off in wooden nickels, it would help their bottom line!

I question the legitimacy of a six acre reservation. Sounds as phony as a wooden watch.

and built on "sacred ground" to boot ?