Unstuck via stick and poke

"When you etch something into flesh, it’s almost like a spell." 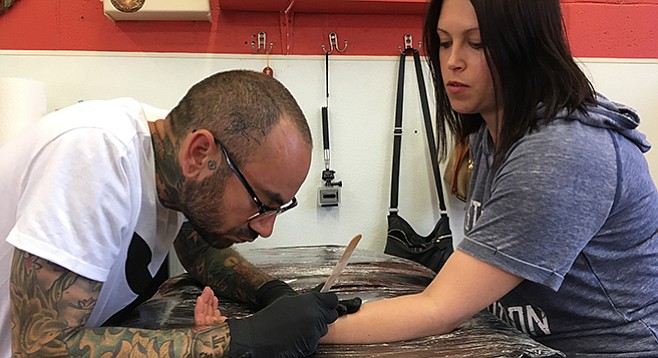 Sarah Kahn was stuck — “in a lot of areas in my life, but really in my career.” She’d gotten her doctorate in clinical psychology, but didn’t want to get licensed, because she “didn’t like some of the systemic issues” in the field. To get unstuck, she tried “yoga and meditation and energy work and different spiritual practices and experiences” — even therapy. But, she says, “this is so different.”

“This” is the pair of tattoos she has received from Phil Mayhew: one on the inside of her left wrist, and one beneath her right ear. She had long been curious about tattoos, though she hesitated to mark herself permanently. “But when I heard it would be done for the purpose of healing, I was down.” 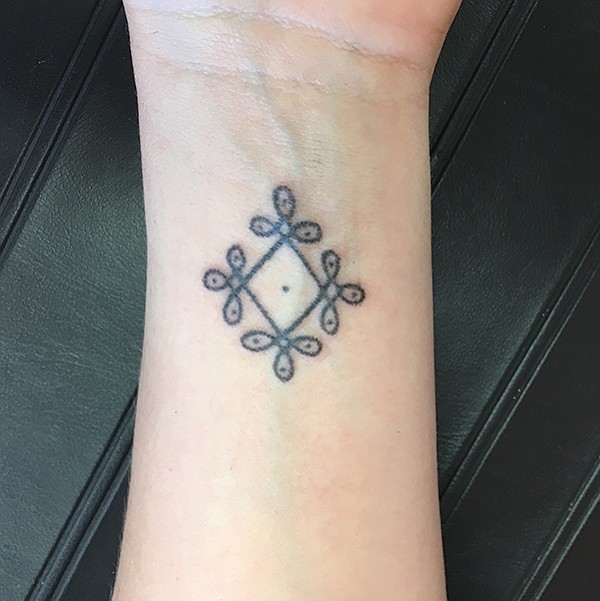 Kahn: “This was about reclaiming a lost part of myself: owning my womanhood.”

When they met, Kahn admired Mayhew’s intuitive sense of her specific need. “He wanted to put it on the arm, and I was like, ‘I want it right here.’ I had always felt, there’s a space there. This was about reclaiming a lost part of myself: owning my womanhood, embracing my feminine and creative aspects. Grad school was very masculine: an energy-driven thing where everything was scheduled.”

After meeting with Kahn, Mayhew says he recommended “an old Indian maze pattern,” taken from “gypsy women in India. They were gypsies, but they were treated like royalty because they held ancient shamanic wisdom. They would be led into people’s homes, and they would tattoo these patterns on people while telling them that wisdom.” That sort of shamanic work “was generally reserved for men, but these women were doing it. To me, they embodied this element of embracing the masculine and the feminine, and you can see both masculine and feminine archetypes within these shapes.”

It wasn’t just the tattoo, says Kahn. “It was everything Philip provided. We’ve talked a lot, and he’s writing it up for me: the process and the history.” But, she says, he couldn’t break out his pen after the arm tattoo, because he wasn’t finished with his needle. “I thought, Oh, there’s one missing on my neck. I knew I needed to complete the process.” After she had the lotus below her ear, “I felt like I was finally myself for the first time ever. And since then, I’ve been writing, I’ve been planning. I’m creating an online course, I’m creating a new business with multiple people; I’m helping to facilitate other people living their dreams. I know what needs to get done and I’m making it happen.”

Today, she is here for a touch-up; Mayhew’s hand-poke method means that there are gaps to fill in after the first session. “It brings a whole new wave of stuff,” says Kahn. “The past couple of days, I was feeling depleted, like I needed a boost.” When Mayhew set to work again, “it was like: it’s here!”

Sacrament of the flesh

“If you look at tattoos,” says heavily tattooed tattoo artist Phil Mayhew, “it’s the most ridiculous thing ever. It hurts, it’s a non-necessity, and it costs money. I even look at myself and I’m like, ‘What was I thinking?’ And yet, it’s intensely popular; it’s become mainstream. Why? I’ve spent a lot of time on that question.” 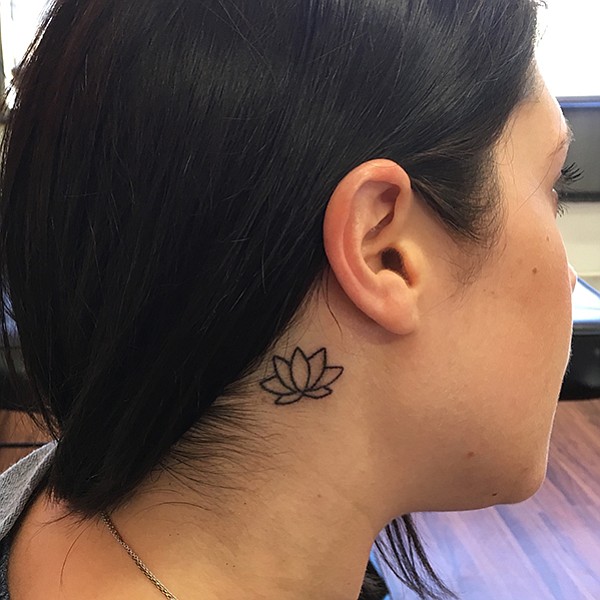 Kahn: “I felt like I was finally myself for the first time ever.”

Mayhew works within the red-walled confines of Primos Tattoo & Piercing in Escondido, and his answer resonates with the name: “primo,” “first of all,” “primal,” even “primitive.” “I looked at anthropological studies on indigenous tribes that do it. I read psychologist Carl Jung, who spent two years with indigenous people; that’s how he came up with a lot of his archetype stuff. I traveled to South America, where they were open to this sort of thing. There, I tattooed the right-hand man of the mayor. I tattooed street thugs. And I did an apprenticeship under a shaman.”

He started writing a book, Tattooing: the Sacrament of the Flesh, laying out the parallels between Catholic sacraments and the ritual of tattooing. But while he views his work as “inherently spiritual and inherently transformative,” he didn’t want to risk getting accused of the ambiguity that can attend those terms. “So I took what I learned in South America and all these studies and set about my own psychological research.” 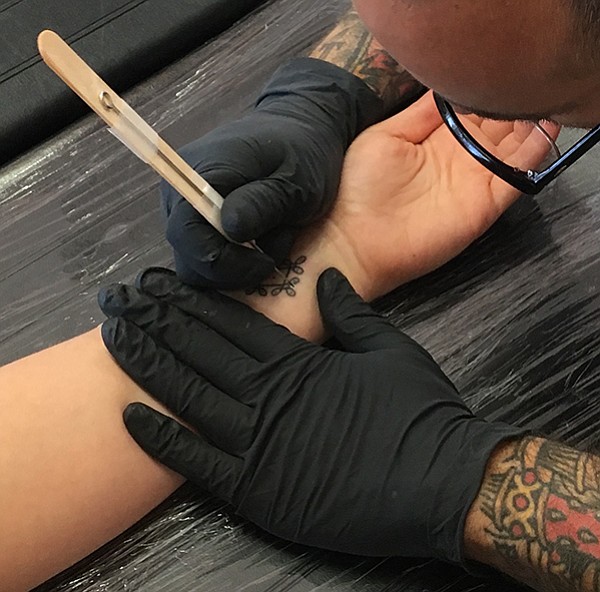 Mayhew fills in the gaps by hand during the followup session

Still: Catholics regard a sacrament as an outward sign of an inward grace, an efficacious symbol — not a bad starting point. “Symbols bear a lot of power in our lives,” says Mayhew. “That’s why advertising agencies spend money on psychology. The McDonald’s logo is red and yellow, and they understand that those colors make you hungry.” Some symbols function as metaphors, “describing things we can’t put into words, things we feel in our inner world. Those feelings often dictate the majority of our lives, because we feel first and then we articulate.”

Tattooing takes those symbols and metaphors and etches them into a person’s flesh. “When that happens, you’re basically playing with their identity. When you etch something into flesh, it’s almost like a spell: the way your psyche reacts to it is to say, ‘This is real now.’ I think, unknowingly, people who get tattoos are saying, ‘I need to add this symbolic part of my life to my flesh,’ It’s certain. It’s almost like people have forgotten a part of themselves, and they’re putting their inner map on the outside, so that they can always remember it.”

And looked at this way, says Mayhew, the pain of tattooing becomes a feature instead of a bug —a sort of healing modality for his brand of personal counseling. “When you’re in pain, you can’t really project your persona or put on a front. It’s almost like there’s this open door to your psyche. The unconscious is more present. And so, when you add words during the tattooing, it’s like they go through that open door and leave an imprint. When people use it for evil, it’s called trauma bonding. But I’m doing the opposite of that. It’s the difference between a good touch and a bad touch.”