A good time (and timing) in Dulzura

"They only feed you on Fridays, Saturdays, Sundays." 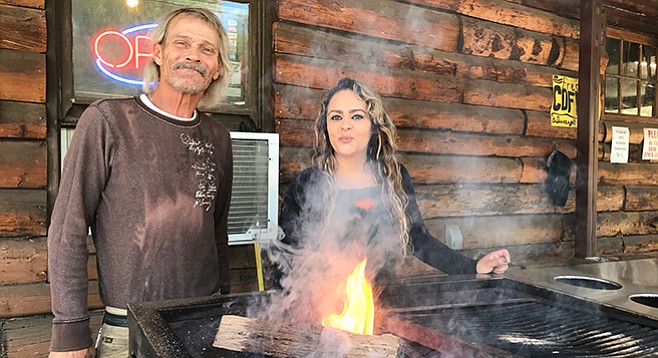 This one-shop stop is Dulzura (population maybe 850, scattered around the countryside). Back in the day, so I hear, Grapes of Wrath people would stop off in their jalopies with one thing in mind: unscrewing their license plates so they wouldn’t get labeled as Okies.

I’ve just got off the 894 country bus, a windy-road hour up from El Cajon. Lady driver has been telling me what kind of food you can get everywhere along the route, from Barrett Junction to Tecate.

“You picked the right day here,” she says as she drops me off. “They only feed you on Fridays, Saturdays, Sundays. And BBQ. That’s it.” She lets me out beside the tiny Dulzura Post office, and near this great old porched wooden building everyone calls the Dulzura Café, even though a new banner reads Dulzura Mini Market.

This is Friday lunchtime, about 12:30. And as the 894 pulls away, I notice smoke puffing out from under the veranda overhang. And a flickering of flames. And a smell of smoky meat. It’s a BBQ, burning wood logs, right outside the log-cabin walls.

“Got pretty good carne asada sandwiches,” says this guy. Jim Pinter. Wiry face that must have been bait to the ladies back in the day. Has lived hereabouts 30 years. Says he’s heading in to get him a couple of carne asada tacos. And maybe a beer. “I’m stuck here. No car. Crashed mine a while back, against the same rock as my ma did. So, waiting till someone I know comes by.”

I climb up the wooden steps with him.

Oh yeah. Ancient stained wood walls inside. Last time I was in here it was a full-on café, with tables, chairs, counter stools, juke box, hot plate. Now, most of that space is shelves of candies, donuts, six-packs, bottles of lighter fluid, Peak antifreeze, groceries. A painting on the wall, by “D.E. Sheckler,” shows this place, maybe in the 1920s, painted yellow and black with an old-style gasoline pump and the sign, “Dulzura Store.” So you know it’s been around.

Jim points up to a trophy wall full of deer, and a tusked boar. “My history teacher,” he says, and busts out laughing. 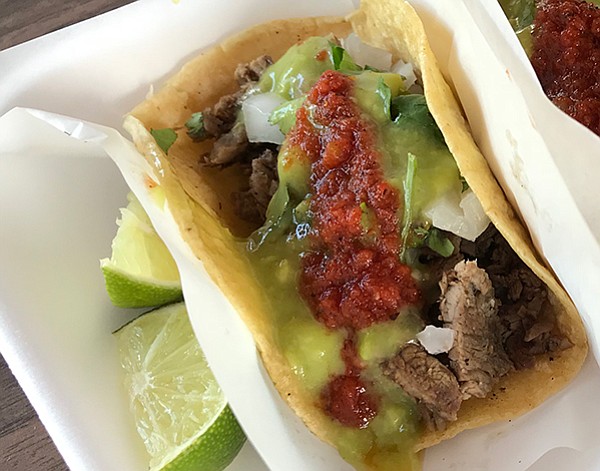 Three counter stools are still up. A chalkboard for today’s specials lists about sixteen cooked items.

Jose, guy behind the counter, says we’re right on time. “We’ve barbecued everything and it’s ready to go,” he says. “Oak-fire food. Just baked the potatoes.

“Yes. I put carne asada, butter, sour cream, and cheese into them. Cost $3.99. Go great with a beer. You can drink it on the property, but not beyond.”

Instead of a beer, I go for the Señorial Sangria. Nice big bottle for $1.85. Jim’s getting his tacos ($1.85 each). We head out, sit under the big overhang that I’m guessing used to shelter gasoline pumps.

“Store’s been here since 1920s, for sure,” says Jim. “During World War Two it was also a, well, brothel. Guy would have to go down to El Cajon weekends, gather the ladies, drive them up.” 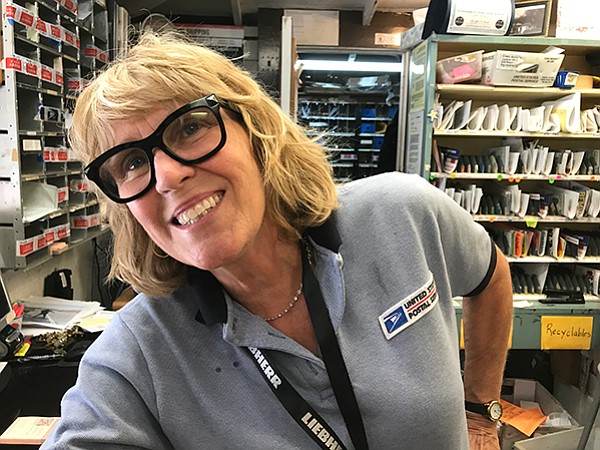 Jose brings out my potato. I start by sitting at a roadside counter that’s inches from Highway 94. Trucks rumble by, okay, feet away, but it feels close. “My grandma’s place was right on 94,” says Jim. “She used to say she could count an entire day’s worth of traffic on her ten fingers and ten toes. Now? Forget it.”

Actually, if you ignore the traffic, you’re looking across to this bucolic scene of bamboos and oaks that follow Dulzura Creek all the way down to Jamul.

“And that little post office?” says Jim. “It’s been here since 1887. Smallest post office in California. Post mistress is great. Karen. She kinda looks after all of us.” 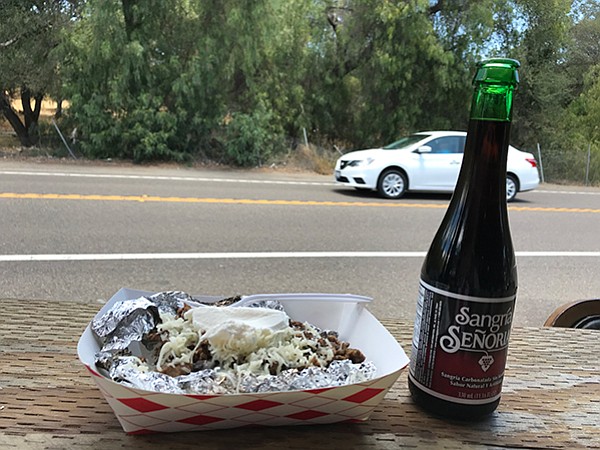 My smoky baked potato and sangria, plus a free view

Jim’s tacos look pretty good and colorful, with corn tortillas, and dollops of red hot sauce on top. But my potato is beautiful too, a smoky-savory mess. The shredded cheese, and sour cream and butter round out the crispy meaty taste you can only get from barbecuing the carne asada, specially on that smoldering oak wood.

Jim and I agree on one thing though: a cerveza and a little more nosh would go down a treat. Besides, he wants to show me all the ancient license plates. So we climb back up the steps, head to a kind of recessed area. And man, there they are, on the walls. All the way back to a rusty, once-red-and-white Wisconsin plate from 1930. 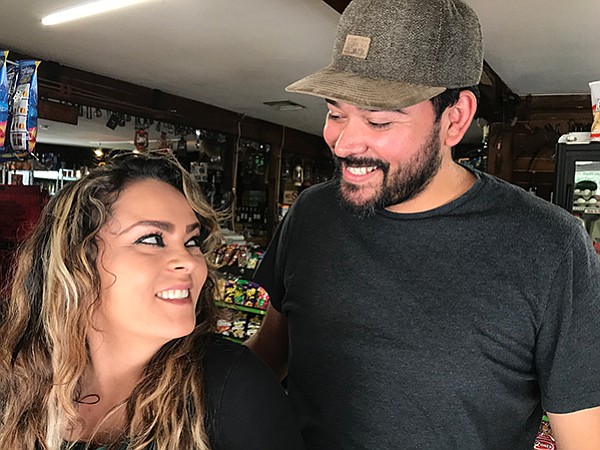 “You should try the torta,” says this voice in the gloom. Woah. Liz, Jose’s wife. She’s working at a desk. The two of them have been running this place since Jose decided to change from his job as an aircraft machinist and Liz dropped teaching for an adventure out where country’s still country. 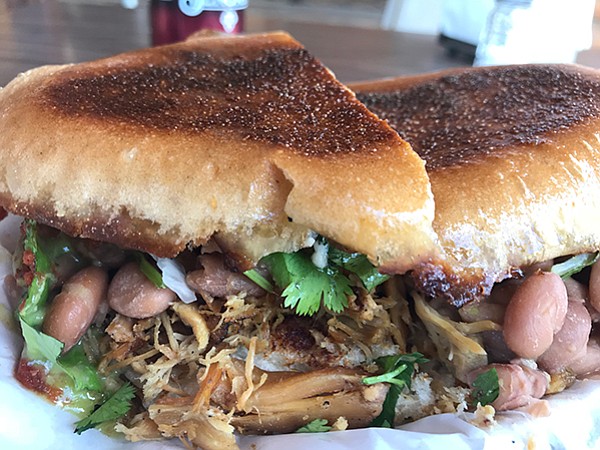 Chicken torta — it's the crispy BBQ'd bread that does it

“Chicken or carne asada, beans, onions, avocado. You won’t be able to finish it.”

She’s right. It is loaded with cilantro, beans, the chicken I chose. Plus, it’s all in a beautiful torta grilled till it’s crisp, with mayo.

Jim and I agree to split it.

“Glad you got chicken,” he says. “Easier to chew without teeth.”

With the salsa, it’s picante and rich. And with a couple of beers (mine’s the Sierra Nevada Sidecar Orange IPA, $3.99, Jim’s is aluminum Bud, $2.73), it’s kinda easy to chew the fat, too. We yak on until this car pulls in.