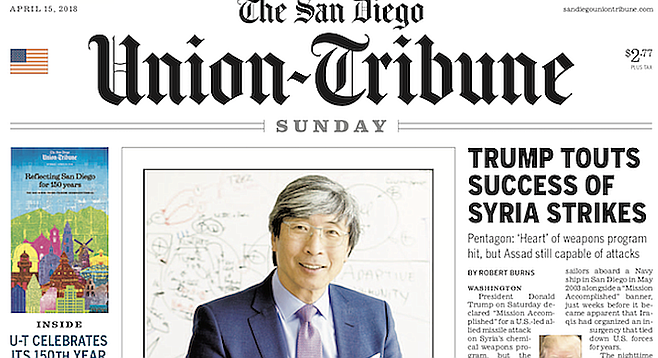 The newspaper dreams of Rancho Santa Fe's colorful John Lynch, one-time vice-chairman and CEO of the Union-Tribune under Republican kingpin Douglas Manchester, appear to have been shattered by the latest development in the tortured saga of tronc, the Chicago-based chain with a funny name which owns the U-T. 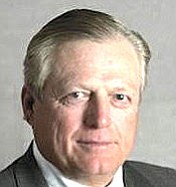 John Lynch. Lynch's arrangement called for the purchase of tronc shares at $23 each, a premium over the current market price of around $17.

Per a June 5 filing with the federal Securities and Exchange Commission, Lynch's previous deal to buy the 25.7 percent of tronc stock controlled by Mike Ferro (who quit as tronc's chairman in March ahead of news that two women had accused him of making inappropriate advances) has fallen apart.

The deal was "not consummated due to Buyer’s breach of its obligations," according to the filing. Lynch's arrangement with Ferro, supposedly backed by putative co-buyer Sargent M. McCormick-Collier — billed as a wealthy heir to onetime Chicago Tribune president Robert Rutherford "Colonel" McCormick — called for the purchase of more than 9 million tronc shares at $23 each, a premium over the current market price of around $17.

A subsequent April 19 SEC filing regarding the deal, which said McCormick-Collier and associates were talking about future asset sales and "potential business combinations or dispositions," led to speculation that onetime border radio maven Lynch would finally ascend to a long-sought executive post in national media.

"There's a need to have a solid newspaper in Chicago that can capture, reclaim its notions of truth and trustworthiness," McCormick-Collier told Crane's Chicago Business in an April 18 profile.

The demise of Lynch's arrangement leaves one more shoe to drop, the long-stalled purchase by Los Angeles physician Patrick Soon-Shiong of the Los Angeles Times and its sister Union-Tribune from tronc for almost $600 million in cash and pension obligations.

Soon-Shiong showed up April 16 in the U-T newsroom to reassure locals that his deal to take over the paper, announced back in early February, was still on track.

But the protracted delay has led some to speculate that the pharmaceutical billionaire is trying to get tronc to lower the price, or, alternatively, may be considering acquiring all of the troubled newspaper chain.

The wait for the paper's would-be rescuer has caused trepidation among the ranks of U-T staffers, worried about a falloff in circulation and advertising, and the absence of any sort of obvious comeback plan.

Tronc has blamed so-called technology transition issues for the holdup, causing some at both the U-T and L.A. Times to wonder whether their jobs may soon be eliminated by robotics.

I confess. It's my fault that newspapers are struggling. I used to love newspapers and there was a time when I would read the Reader from cover to cover and several sections of the U-T. I gave up on them at the end of the last century when the internet offered more. For some reason the U-T was sending me free copies for the last two years. Most were never opened, instead I gave them to friends who are computer illiterates.

I am better informed than ever while wasting less time on random data that is irrelevant to my interests as a citizen. I don't have ink stains on my fingers or dining table. I'm not responsible for the massive waste of wood pulp that is 'news'. I am willing to subscribe to those online sources who actually do the work and uncover stories that make the world a better place.

The drawn-out purchase of the papers by Soon-Shiong looks less likely to actually close with each passing day. The papers themselves reported the "sale" as if it was final when it was anything but final. Then he showed up to talk to the employees and was treating it as a done deal. Well, it ain't over until the fat lady sings (i.e. the money transfers), and we're still waiting. While it looks as if Lynch and cronies are not going to pull off their scheme, I'm not convinced that we'll ever see the sale go through as previously reported.

Apparently, the sale is set to close tomorrow: