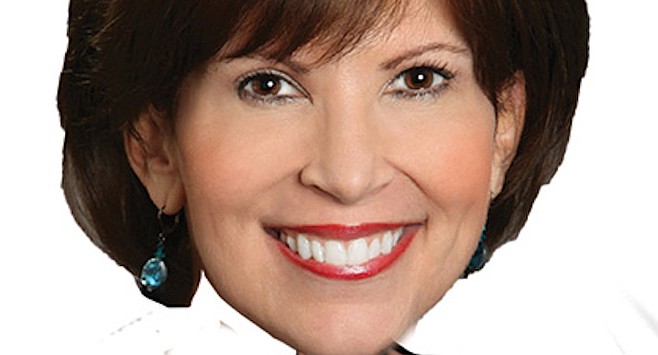 Kris Michell, former chief of staff to both Mayor Golding and Mayor Sanders, contributed to the San Diego City Employees’ Retirement System from November 21, 1994 through March 22, 1998.

Then she went on to non-governmental groups touting corporate welfare programs, such as the Downtown San Diego Partnership, which she headed beginning in 2011. There, she was a promoter of the still-pending effort to raise transient occupancy taxes for an expansion of the convention center, but also did yeoman work on the homeless problem.

At the time she was rehired by the City in October, there were rumors that she was brought back on board partly to fatten up her pension benefits. Here’s the skinny, according to Susan Youngflesh, associate general counsel of the San Diego City Employees’ Retirement System: On December 22, 2017, while she was still at the deputy’s job, she purchased two years' worth of Purchase of Service contracts at a cost of $103,272.48. On April 26 of this year, after she was chief operating officer, she purchased a three-year agreement at a cost ofd $134,397.83. So she now has bought five years of purchase of service credits. She has not entered the deferred retirement option program, which mandates that members retire in five years.

Neither program is available to those hired after 2005.

She's a public servant and she paid in to catch up for retirement. What's the big deal?

themanthemyththelegend: That's one way of looking at it. This started when I got an anonymous note from a City employee saying Michell was gaming the system. It took me some time to get the information. Unlike you, some people in City government and I cock an eyebrow over her leaving government work, then heading downtown booster organizations (almost the same as working for government), raking in very high pay, then getting back on the City payroll and putting fat sums into the pension program to jack up her retirement. I have never liked that purchase of service credit program and am glad it is not available to those hired after 2005. Best, Don Bauder

That government pension thing can be a sweetheart. transparentcalifornia.com reports Golding gets about $58,000 a year from 15.1 years of city service and another $14,000 for time spent as a County Supervisor. Note bad for retiring at age 55. I'm all but certain that she makes more as a retired mayor than she did when she was in office: she gets COLAs.

Kris Mitchell must see the public pension plan as a gift from Kris Kringle: there must be some kind of big future paybacks for buying those credits.

Meanwhile everyone else enjoye your fixed pension, Social Security, or living in a shopping cart. Let us eat cake, huh Kris?

Bob-Hudson: A very astute observation. Does Golding deserve $72,000 a year in her pension? I don't think so. Kris Michell's pension will no doubt be very large. She spent most of her time working for high pay at the San Diego Downtown Partnership. She may get a big retirement from there, too; I don't know. Best, Don Bauder

This does NOT make any sense! Scott Chadwick’s COO salary in 2015 was more than 250K according to Transparent California. Yet Michell can buy three years of service credit for $134K. I thought you are suppose to be paying BOTH sides of the pension costs when purchasing “air time” or service credits? Why would the cost of two years at the Deputy position/salary cost more than three years at the COO salary on a per year basis? Was some sort of sweetheart deal arranged in violation of the Charter?

In addition, SDCERS rules clealy state you must have five (full time years) years of service to the city before your are allowed to purchase service credits.

JustWondering: Possibly she picked up the necessary months after she was hired in October, 2017. She certainly would have picked them up before her April purchase of this year. Or, those SDCERS rules were enacted after she served her first term. I doubt she would have done this in defiance of rules. Best, Don Bauder

JustWondering: I don't know if some kind of sweetheart deal was arranged, and if so, whether it violated the charter. The anonymous person who tipped me off, calling himself/herself "a staff whistle blower," thinks Michell made at least a quarter of a million dollars annually while working in the private sector pushing mainly corporate welfare projects, said, "I believe [she] made sure [she'd] be able to come back and game the system because the changes only applied to employees hired after 2005." Of course, I did my own homework before sending anything to be printed, but the staff person made a point. Best, Don Bauder

Well that’s interesting. Wouldn’t be surprised by some sort of deal at all. But audits are suppose to shine the light on things like this. If a deal was made, and that’s big IF. If it violated the Charter, Ordinances and SDCERS Board rules would those PSC contracts be invalid?

Many many PSC contracts were nullified by the Courts for being underpriced, but these were just regular City employees, not the ones in so called leadership positions.

I believe SDCERS has a fiduciary responsibility to the system members to audit these two contracts to make sure they are incompliance with all Board Rules, City Ordinances and Charter Sections.

An audit protects BOTH parties. If a contract was underpriced for whatever reason then the corrected funds or reduced service time can be applied now. If an audit discovered some error later, SDCERS charges the assumed rate of return interest on the underpayment along with the principal..

JustWondering: You are right: an audit is essential. However, during her first employment with the City, the purchase of service credits WERE underpriced. This caused a big stink, ad the practice was abolished (but not until employees had the chance to take advantage of the old underpriced purchases for awhile.) Best, Don Bauder

Many of those who had “underpriced” contracts had those legally binding documents recinded/adjusted by the courts. They either made up the difference by paying the new rates, plus accrued interest, as determined by SDCERS. Or they had their service time adjusted thus lowering their pension benefit. In some very messy cases, DROP accounts were altered as well leading to more unsuccessful litigation against SDCERS.

All in all the purchase of service credits was, and remains, a bad deal for the taxpayers.

JustWondering: Agreed. Purchase of service credits is a bad deal for taxpayer. At least, Michell can only buy five years, which she has done. Best, Don Bauder

All San Diego Traditions that should end...

concernedcitizen77: Of course they should end. Will they? As city attorney, Mike Aguirre tried to end some of the most rancid abuses, including corporate welfare. He was smeared by the Union-Tribune and lost badly in the next election. Best, Don Bauder

Mike Murphy: If I had known of kickbacks, I would have included them in this item. I don't think that charge can be made fairly. Best, Don Bauder