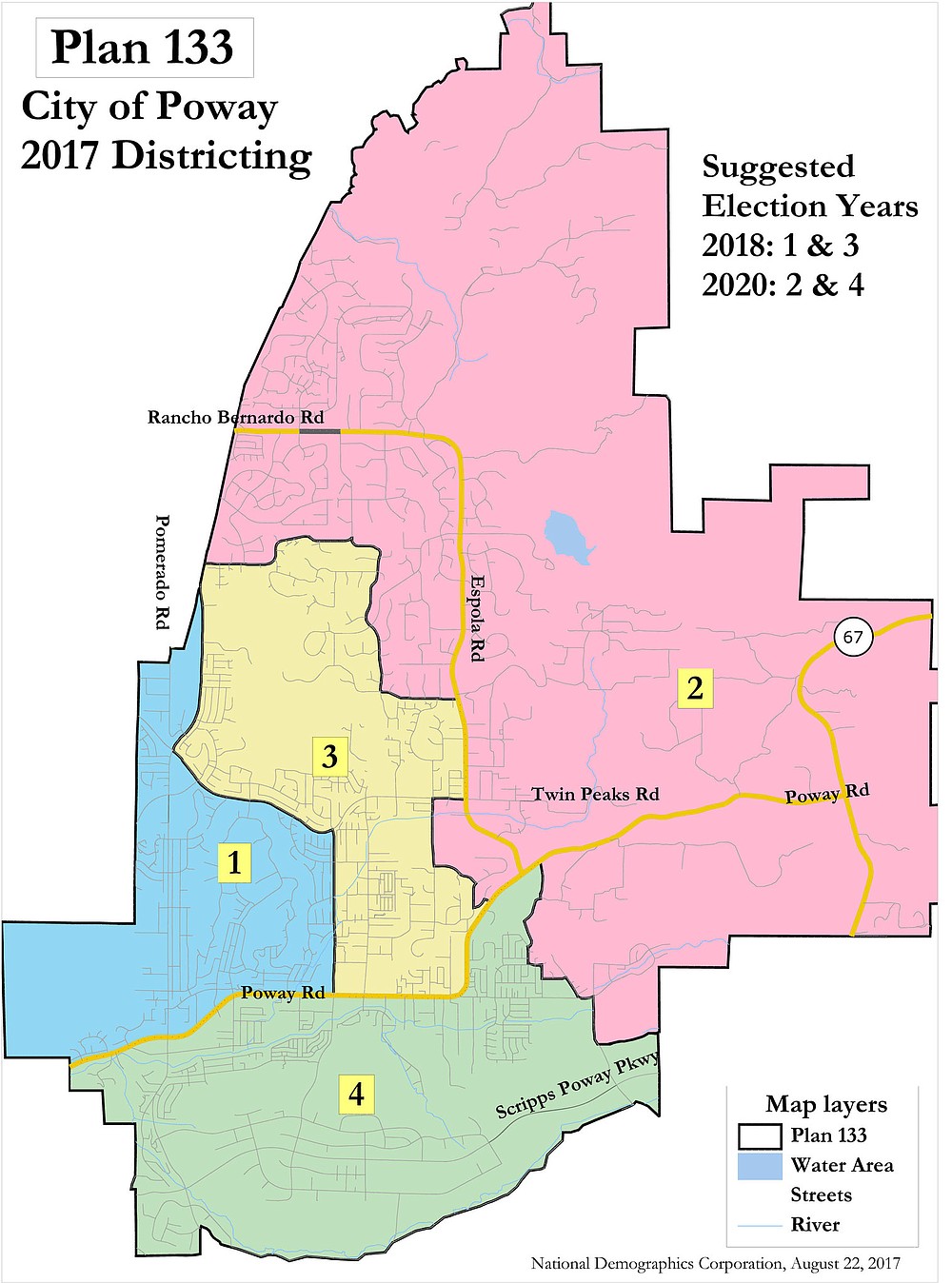 As the candidate filing period opened July 16 for elected offices across the county, including seats for two new Poway council districts, a lawsuit filed to stop the new districts went back to court.

The November 6, 2018 election will be the first that Poway and many other local jurisdictions in the county will have district elections rather than at-large elections for members of councils and boards.

The city gave in to the demand and set out to change their election process so each council member would be elected by a separate district of the city (which might increase the chance of minority representation) rather than allowing a majority of the city to choose every council member.

The city of Poway council agenda report from September 19, 2017 states, “The California Voting Rights Act is tilted heavily in favor of plaintiffs' attorneys. Indeed, over the relatively short 15-year history of the act... public agencies have paid [them] nearly 15 million dollars.”

After a lengthy vetting process the city of Poway adopted four new council districts and established an election timetable for each one. This November Poway residents will vote on the office of mayor and council members from districts 1 and 3. In 2020 districts 2 and 4 will be voted on. One additional election will take place this November to fill the at-large council vacancy left by the resignation of Councilman Jim Cunningham.

After changing their voting process to avoid being sued, the city of Poway was sued because they changed their voting process. On October 4, 2017 former mayor and current resident Don Higginson filed suit against Poway and Attorney General Xavier Becerra, asking a United States district court to declare Poway’s election change and the California Voting Rights Act unconstitutional.

Higginson’s complaint states, “The Equal Protection Clause of the Fourteenth Amendment prevents a state, in the absence of sufficient justification, from separating its citizens into different voting districts on the basis of race...the city’s new districts [are] traceable to the CVRA’s requirement that the city engage in racial gerrymandering.”

He further explained his action in a January 3, 2018 Union Tribune commentary: “Poway was forced to switch from at-large to by-district voting for no reason other than lining the pockets of a private attorney...The CVRA now can be best described as legalized extortion.”

Hiram Soto wrote a Union Tribune commentary in favor of Poway’s election changes. He stated, “Years of at-large local elections have resulted in South Poway being historically underrepresented on the City Council compared to the wealthier north side of town.”

Though Higginson filed motions July 20 and July 25 attempting to get an injunction against the new election process in time to stop it for the Nov. 6 election, the city of Poway is going forward as planned.

Mayor Steve Vaus is running for reelection. Brian Edmonston is his only challenger to pull nomination papers so far.

Councilman John Mullin is running for reelection in new district 3. So far he does not have a challenger.

At large councilwoman Caylin Frank, who was appointed to replace Cunningham, is running to be elected. Randall J. Young has pulled papers to challenger her.

A similar story in San Diego has been playing out with a different result. Bret Caslavka and Community Voices for Education continue to fight for by-district (or sub-district) elections for San Diego Unified School Board, which seems to be the only local body that has been able to keep at-large elections for every representative. It doesn’t appear Shenkman has sent them a demand letter.