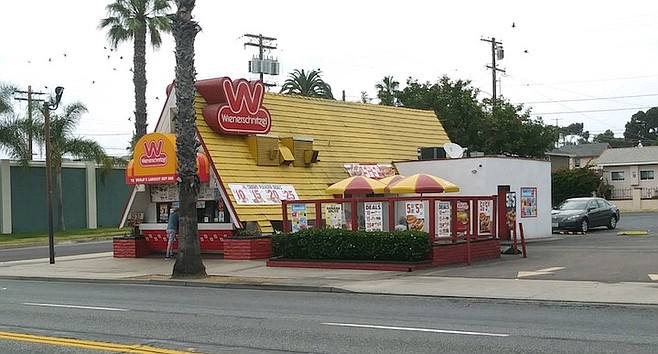 Half a block of prime downtown Oceanside real estate has just been sold, impacting a handful of longtime Oceanside businesses.

“We have a week left and then we are moving to Hot Springs, Arkansas,” says Minda, the co-owner of L&M Gifts on North Coast Highway. “We don’t have much left…six T-shirts are going for $10. Anything that has ‘Oceanside’ on it, if you buy one, you get three or four for free.”

Escrow recently closed on the 17,500-square foot building on the northwest corner of North Coast Highway and Pier View Way. 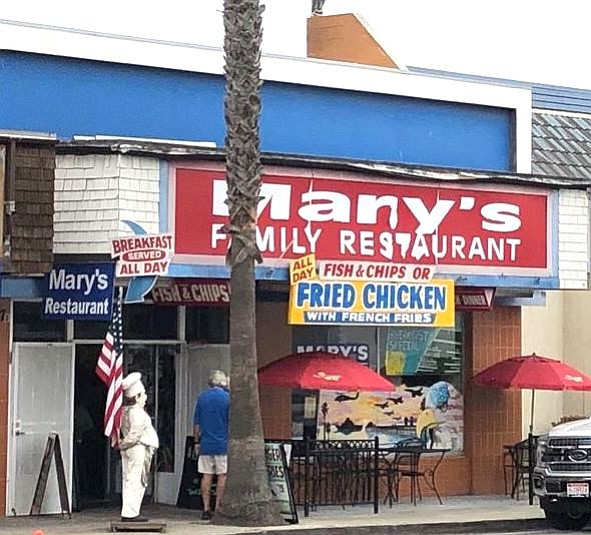 Jose Hernandez worked his way up from a dishwasher before taking over Mary’s in 1999.

Mary Cathay and her late husband Harry bought the building in 1948 to house their own military uniform and embroidery businesses that served the Marine Corps. Mary Cathay still runs H&M Military Supplies as well as the next door Cotton Patch. The building was listed for $4.8 million, but insiders say the actual sale price was closer to $4 million.

The building includes a barber shop, a vitamin store, and Mary’s Family Restaurant which was once nicknamed “City Hall West” by former Mayor Terry Johnson. Mary’s and its Americana comfort food menu was famous for hosting business lunches with city councilmen, city staff, and those wanting to do business in Oceanside. City hall is right across the street.

Not happy with the changes is Jose Hernandez who has successfully owned and operated Mary’s for almost 20 years. He says he was hit with a new lease that will increase the rent on his 3,000-square-foot restaurant space at least fourfold.

Hernandez, 57, says he hopes to relocate Mary’s because he says he probably can’t survive the rent increase at 307 North Coast Highway. Hernandez says he feels responsible for the ten employees and their families.

“This was around as a restaurant 40 years before I came around,” Hernandez tells me. He says he first came to North County as a teenage field hand working in Carlsbad tomato fields. He worked his way up from a dishwasher to manager at a different coffee shop restaurant in Oceanside before taking over Mary’s in 1999. “Before I came they were doing like $500 a day. On my first Sunday I did $2,000.”

Mary’s has thrived thanks to its comfort food such as meatloaf, open-faced pot roast sandwiches, Mexican breakfasts, and chicken fried steak. “I am happy to work seven days a week. I have four kids who all worked here. I am not quitting. I would like to hear from anyone who may have ideas [for a new location].”

Falling out of escrow was the purchase of the 50-year-old Wienerschnitzel yellow-roofed A-frame hot dog drive-through at 624 North Coast Highway. It was slated to be torn down and rebuilt as a Starbucks.

One person with knowledge of the project says plans for the new Starbucks fell through when the City of Oceanside told developers they would have to pay for the undergrounding of utilities.

Bart Pebbles of Caliber Retail Properties in Irvine says his company has invested $400,000 in pre-development fees on the Starbucks/Wienerschitzel project. He says he is reluctant to talk about project details because, “These things are sensitive.”

Meanwhile some big changes are afoot for another historic Coast Highway building two blocks north of Wienerschitzel. Two months ago a Los Angeles-based development group called AIG Five closed escrow on the 1.7 acres that includes the Mira Mar restaurant building (815 North Coast Highway) and the adjacent Motel Six (901 North Coast Highway). In the 50s, 60s and 70s, the Mira Mar (along with the Flying Bridge three blocks north) were known as the swankiest restaurants in Oceanside.

A person associated with AIG Five who declined to be named said that the Mira Mar restaurant building and the Motel 6 buildings will be razed. The person says AIG-5 is in the process of deciding which plan to settle on.

The Mira Mar restaurant has been vacant for 20 years. It is the white building one sees at western the terminus of Highway 76.

When any commercial property is sold the new owner usually has a much higher investment than the original owner and has to get a return on his investment. Be it commercial buildings or apartment buildings the one thing that the tenants can bank on is that their rents will go up. Many small mom and pop businesses have narrow profit margins and many can not tolerate any substantial increase.

Mr. Vilas- Yes, you are not the only one who I have heard from who said the undergrounding mandate is anti-business. But could I please remind you that if the state of California was a separate country, it would have the 5th largest GNP.

"Anti-business" Yeah, like there is such a concept playing out in the halls of governing and commerce-based institutions. "Anti-business" is the term money grubbers throw around when they can't ignore every regulation and safeguard that's put in place to protect consumers (the ones who actually make the economy turn). "Mom and pop" businesses? Where? 1959 Kansas? If you don't have a diverse community model that balances business, municipal services, and public areas then you'll always lament the loss of a hot dog stand, tire warehouse, fast food shack, phone store, gas station, cigarette discounters, etc.

The under-grounding of utilities is a good thing.... Utility poles and lines are very unsightly...

Yes concerned. Of course undergrounding is a good thing. But I think thins came up as an extra, unexpected expense after they already started the process. That's the issue.

The key to fixing this whole mess is more Wienerschitzels. Everyone knows that hot dogs bring in money. Look at Germany...for the love of god, pork products have always been the saving grace of any capitalist economy. Now, if you had a socialist model in play, you'd have to go w/ hamburgers and fries. Corndogs are the gas the fuels the moneymaking fire we want burning in our communities. I say "Nitrates then, nitrates now, nitrates for the future!...for a growing San Diego economy and some laundromats mixed with a sprinkling of 7-11s." Ah, the aesthetically pleasing strip mall will dominant the landscapes of S.D. County. Maybe a cell phone service provider situated between your hotdogs, clean clothes, and Big Gulps. Yes, be proud of your brick and mortar moneymaking venues that will be out of business in 5-7 years. Oh, and the jobs! dozens of low paying positions that take individual interest and investment away from community cohesiveness and belonging. Wait, I've just described the majority of Southern California cities. Nevermind, let's bring in the anchor stores and Sunglass Hut kiosks.