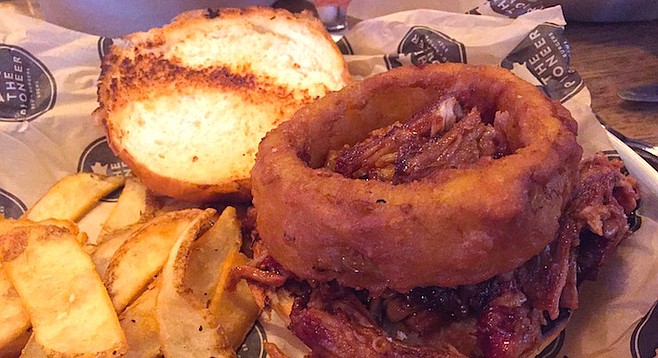 There’s no doubting Chef Hanis Cavin’s affinity for pigs. On his forearm is a tattoo of a butcher’s diagram of pork cuts, and in his home is his beloved pet, Carnitas—the not-to-be-eaten little piggy for which Cavin’s restaurants, Carnitas’ Snack Shack in North Park and the Embarcadero, were named.

And now, Cavin has partnered with fellow chef Willie DePasquale (of Moceri Produce) to combine his passion for pork with his love of barbecue and open The Pioneer BBQ in La Mesa. 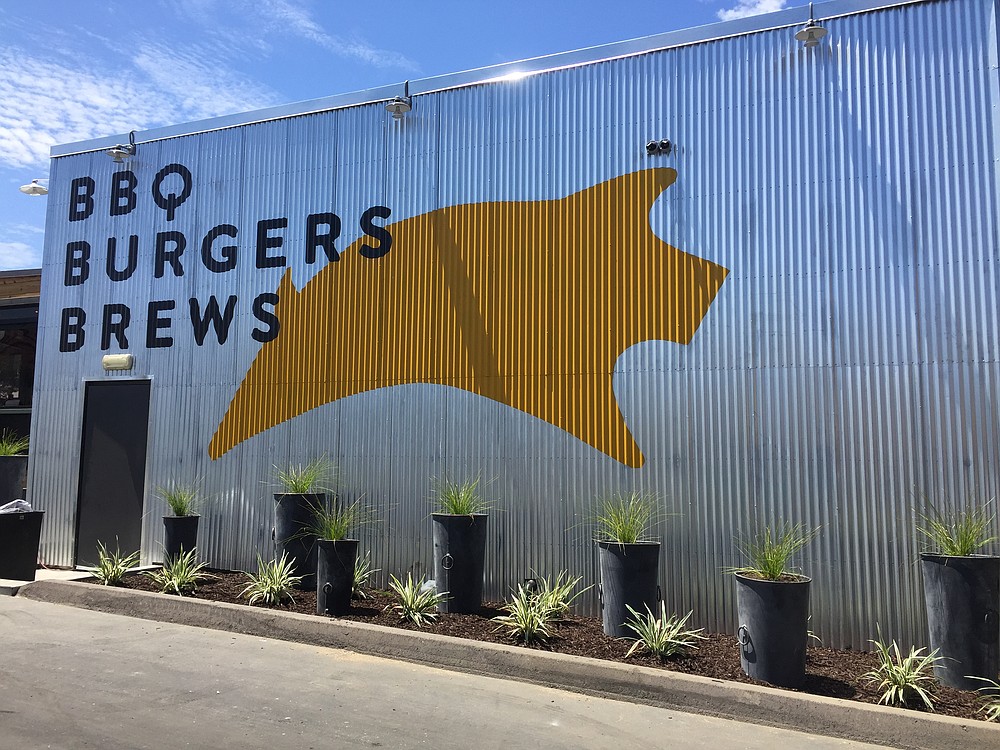 The interior is spacious, with high ceilings and tables spread out, allowing plenty of room to stretch after what is bound to be a heavy meal. Being further from the coast, La Mesa can get quite hot in the summer, so I was pleased to feel the AC pumping hard on a 90-something degree day. 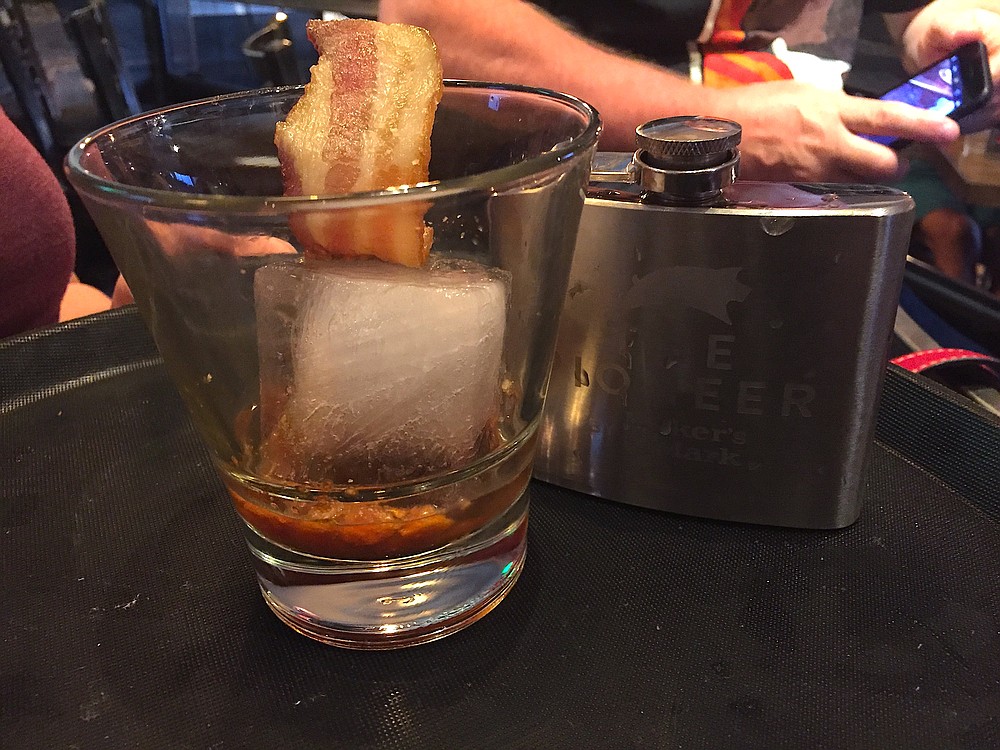 The Pioneer Cocktail, before it's poured from the flask

In addition to a full bar, beer, wine, and craft sodas such as Orange Hibiscus and Black Cherry Tarragon, there is a selection of “Pioneer Cocktails.” For a sweet and refreshing starter, I went with the Frontier Frozé (frozen rosé, Absolut vodka, peach/strawberry juice, $7.50). It’s like a Slurpee for grownup 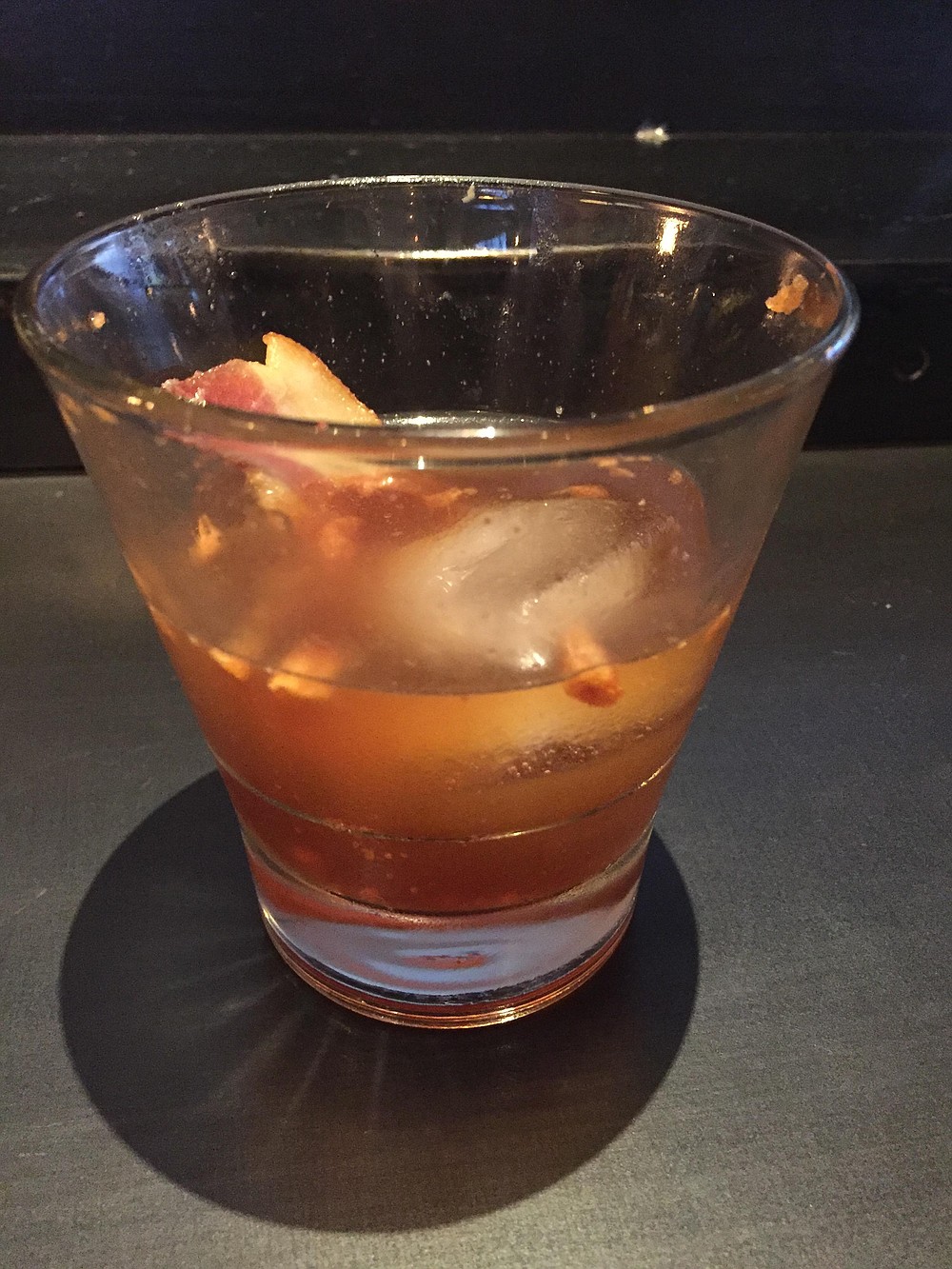 The Pioneer cocktail after it's poured into the glass

Another cocktail, The Pioneer (bourbon, cognac, maple, bacon, Angostura and walnut bitters, $11.95), comes in its own flask which you can take home for an additional $10. Though the flavor of this concoction was a hit among my pioneer posse, we reached consensus with our quibbles: the bacon needs to be crispy, and when poured, the drink (albeit delicious) looked terribly unappetizing, with little bits of brown chicharron floating in the brown liquid. 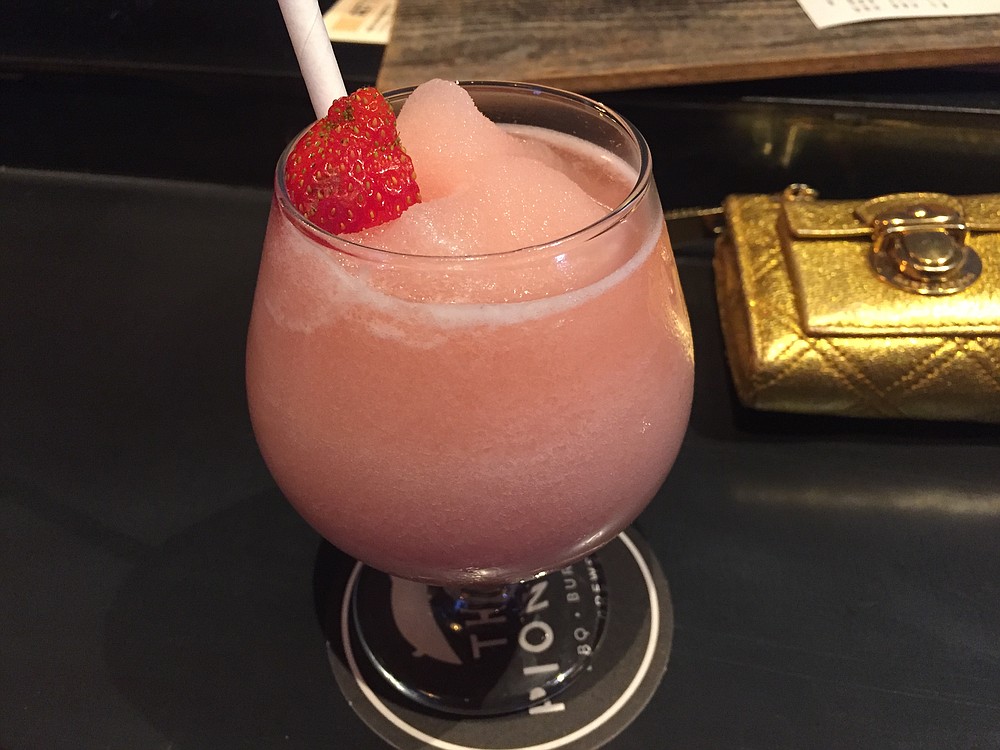 I usually wouldn’t order a salad at a barbecue joint, but on one visit, I sampled the Chopped Salad ($10.95). Fresh cauliflower, carrots, peas, red bell pepper, almonds, and charred onions are chopped and mixed so that each bite contains a note from each distinct ingredient. 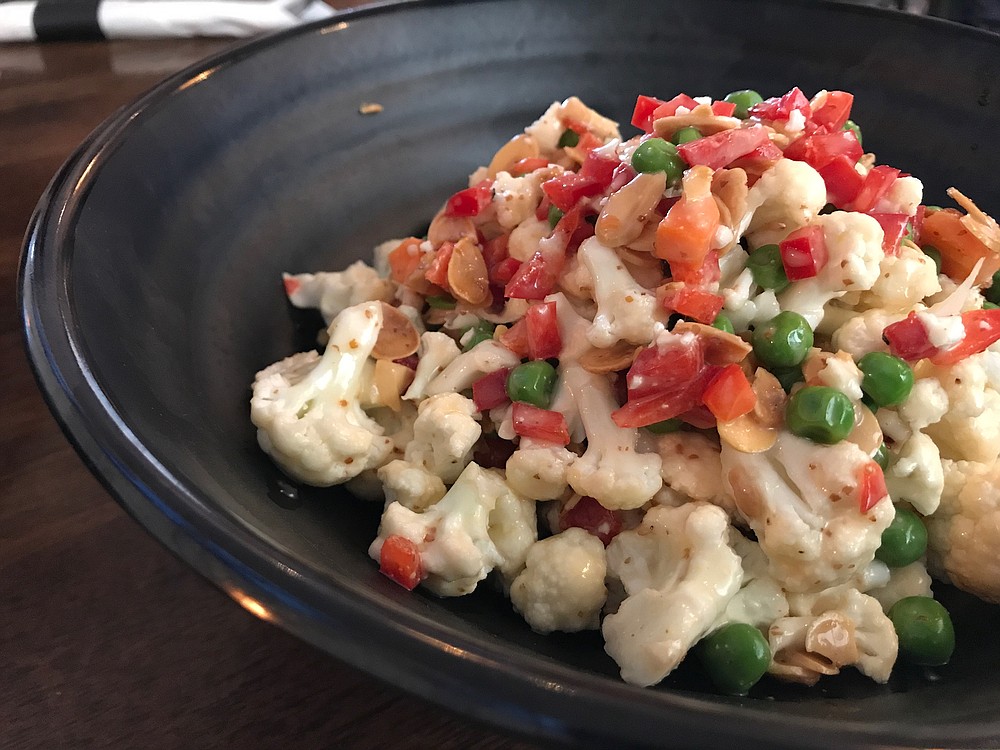 I'm not usually a cauliflower fan, but this chopped salad orchestrated fresh veggies into a flavor harmony.

A light honey grain mustard dressing adds a sweet and vinegary tang. I could see how adding one of the meat options (shredded smoked chicken, brisket, or pulled pork) would have transformed this into a satisfying, low-carb meal. 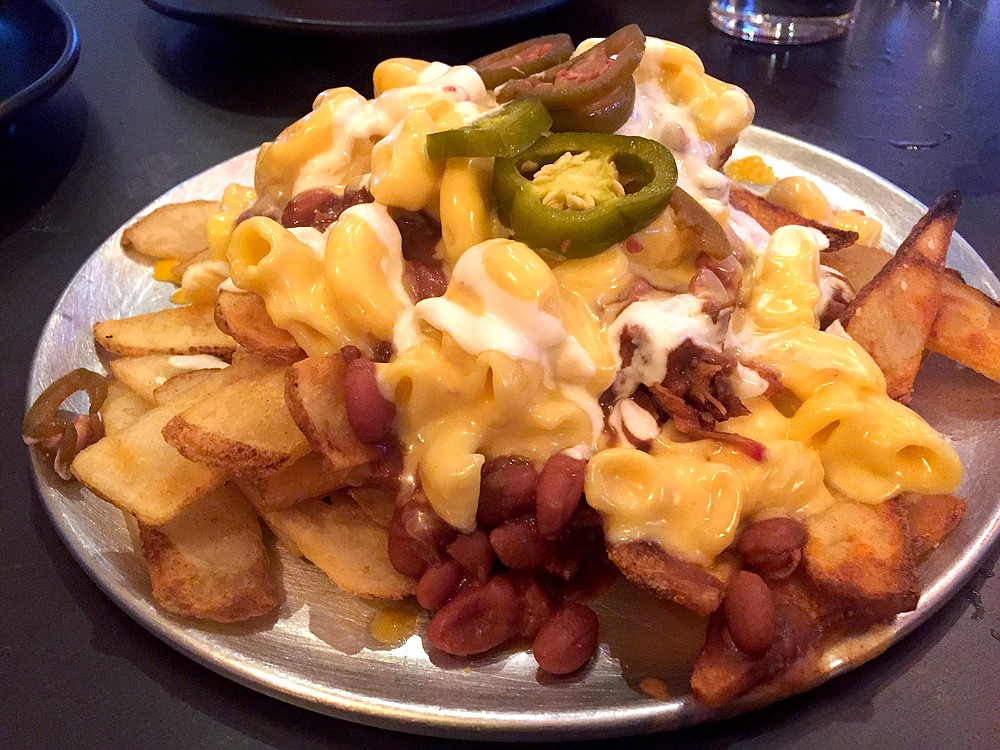 As my friend Kimberly put it, these Dirty Fries were scandalous.

On the flip side of the appetizer menu is the Smoked Pulled Pork Dirty Fries, and oh… they’re dirty alright. Before I talk about the “entire barbecue party on one plate” toppings, I must first comment on these fries. Flat like chips which allows for more crispy, seasoned surface area, but just thick enough to retain their soft, creamy potato insides: I’ve never encountered fries like this before, and my first thought was, “Why doesn’t everyone do them this way?” Now back to those toppings: smokehouse beans, mac n cheese, sour cream, pickled jalapeños, and of course, the pulled pork. It’s a rich, creamy, savory soirée. 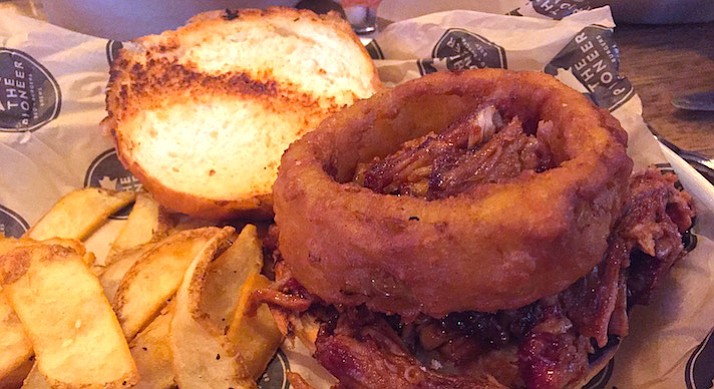 My favorite meat selection is the pulled pork, which I prefer to enjoy as it’s served in The Porker sandwich ($10.95). The meat is smoked for 12 hours and slathered in Ivan’s BBQ sauce, then topped with coleslaw and a giant onion ring. I’m mayonnaise averse, so I order without the coleslaw. The slow-cooked meat is tender and lean, just the way I like it.

I love this place.The Brisket is exceptional and the Cheddar Sausage is incredible.

The current hours of operation suck. Doesn't open until 5 PM. (Im sure he is losing a lot of business on the weekends.) Supposedly they will open earlier later this year.