Vienna Sausages don't get that kind of love

Putting the SPAM in Spamalot 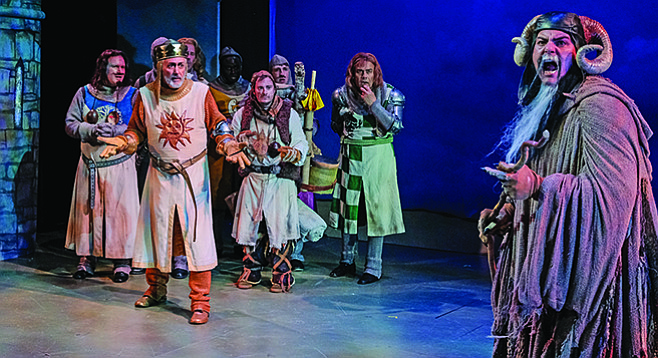 As the story goes, pork shoulder was a tough sell in 1920s America, so a scion of the Hormel Foods empire devised a way to blend the cheap meat with ham and preservatives, and in 1937 the first cans of SPAM were sold.

It’s supposed to be a portmanteau, mashing together the words spiced and ham, though aside from salt and sugar, the closest thing to spice in spam is the sodium nitrate that gives it a shelf life of somewhere between two and five years, depending who you ask.

The stuff has become something of a processed food legend, almost despite itself. A frequent subject of kitschy magazine features, SPAM history and myths have proliferated to the point there is now a museum and annual festival dedicated to it. You don’t see Vienna Sausages getting that kind of love.

Back in the 1940s, a group of 60 women known as the Hormel Girls used to tour the country with an orchestra to evangelize SPAM. The United States reportedly sent millions of cans to feed the Russian army during World War Two, where it may or may not have been interpreted as a virtue of capitalism. Adweek has alleged that, in current-day Southeast Asia, gift packs of the stuff are deemed “popular wedding gifts.”

All this attention for a processed meat allegedly cooked within its own can on the assembly line.

Of course, another definition of spam has almost eclipsed the original: unwanted email. Hormel blames the British sketch comedy show, Monty Python’s Flying Circus, for SPAM eventually being adopted as a term for unwanted email. In the 1970 sketch, characters repeat the word "spam" so often that the word effectively renders the rest of language meaningless. Similarly, in its mode of communication, spam email represents noise rather than signal, and prevents any legitimate message from getting through.

Wired magazine reported that Hormel recently attempted to trademark the word "spam," hoping to keep the gelatinous pork product from being associated with bogus emails. But in the end, the corporation settled for insisting that any public references to the actual canned product should be written in all caps and always followed by the words, “Luncheon Meat.”

So it’s a tad ironic that the story of SPAM Luncheon Meat only seems to prove the adage there’s no such thing as bad publicity. Whether attributable to Hormel Girls, wedding registries, the cult status of Monty Python comedy, or excessive emails, the proliferation of spam has only increased since the Russians got ahold of it.

Four or five years ago, Hormel made the claim 8 billion cans of SPAM Luncheon Meat had been sold in 44 countries. Hormel hasn’t updated that number, but the official SPAM web site claims the world consumes 12.8 cans every second, so the actual count could now be approaching 10 billion.

Nearly a century after its inception, SPAM has become a bona fide American cultural export. And the Monty Python musical Spamalot plays at the Cygnet Theatre in Old Town until August 12.