These walkways and staircases rival La Mesa’s “Secret Stairs” for a cardio workout. 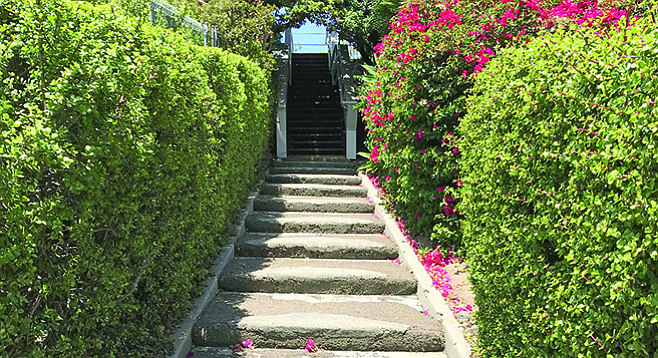 La Mesa and adjacent Rolando Village stand out as one of the few areas in the county that offer a system of public walkways and stairways. Probably best known are the “Secret Stairs” of Mt. Nebo with 489 steps in seven segments (see Roam-O-Rama 7-4-2018). The Rolando Village area of San Diego, adjacent to La Mesa, also has walkways and stairways, called “catwalks” by area residents. There are 256 steps in eight segments, with more walkways than stairways. A double loop, like butterfly wings, begins at Rolando Park on Vigo Drive. The body of this butterfly is the fourth “catwalk.” Walking fast or running this route would provide a major workout. Do the walk in reverse for more uphill stairs. 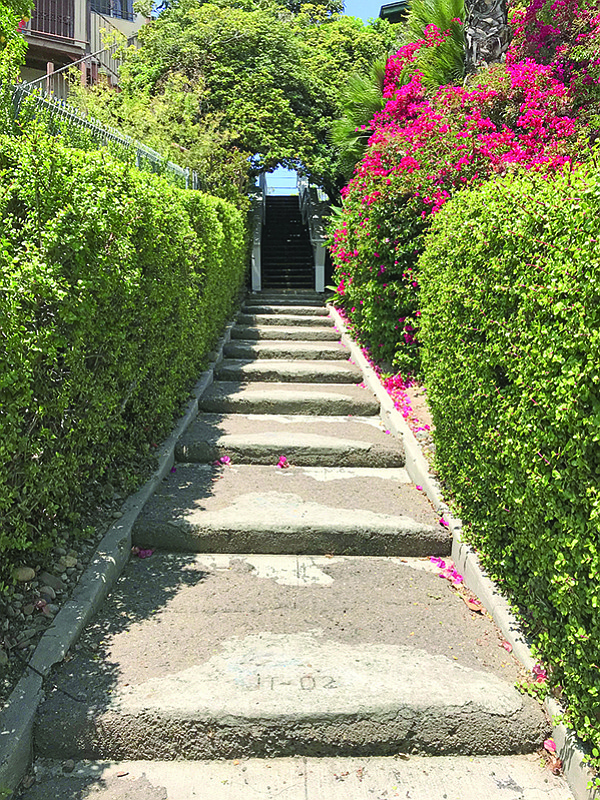 Long steps to the next street.

Rolando Village tract homes were developed after World War II to meet the high demand for housing in the rapidly growing post-war San Diego. The close-knit homes offer interesting architecture, with many bungalow-style homes in this rolling landscape. In fact, the rolling landscape is the reason behind the name of this development. The “catwalks” provide a way of connecting the many tree-lined streets that are found at different elevations. The idea for these pathways may have been influenced by those found in the hilly landscape of adjacent La Mesa — staircases there were first built in 1927. An added interesting feature for the Rolando area are acorn-style lampposts found on many streets. Unlike the La Mesa “secret stairs,” the “catwalks” are not signed, so use cross streets as references.

Begin the walk by heading north on Alamo Drive from Vigo Drive, turning right on Patria Drive and then left on Valencia Drive. At the intersection of Valencia and Lenore Drive, look left for the first “catwalk” at 0.5 mile next to the street light. This “catwalk” consists of four sets of stairs with a total of 45 steps. Directly across Alamo Drive is the second “catwalk,” which has no steps but heads uphill. Turn left and head down/south Mataro Drive to where Patria Drive intersects and look left to see the third “catwalk” at mile 0.7. There are only 7 steps but it climbs uphill to Rolando Boulevard. Take an immediate left on Aragon Drive following it down to Aragon Way. Turn right on Aragon Way at 0.8 mile and look for a yellow fire hydrant. The fourth “catwalk” is here and has two sections of steps for a total of 37 steps. This completes one-half of the butterfly loop with the fourth “catwalk” as the connecting body. This part of the butterfly wing will be complete when you head back to Rolando Park after finishing the second wing-loop. 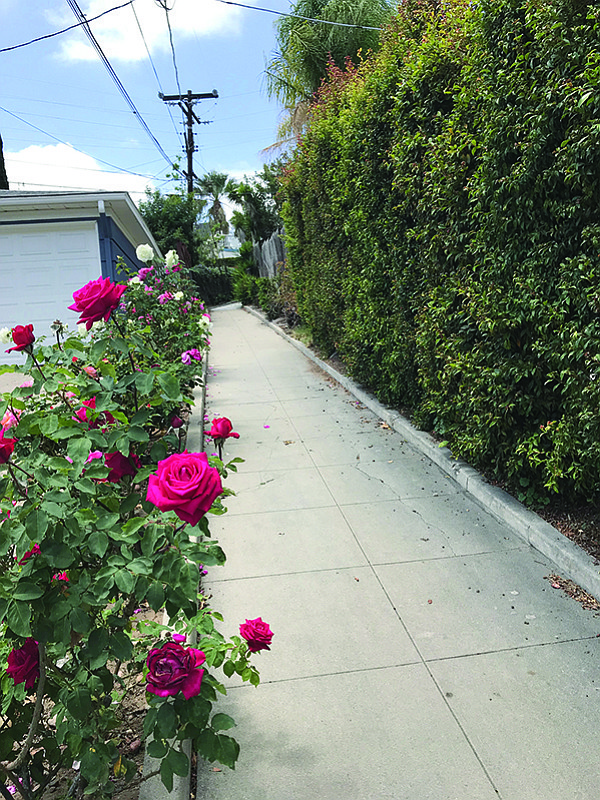 Roses add color to this walkway

From Malcolm Drive after passing through the fourth “catwalk” at mile 1.0, head west and then north on Revillo Drive and cross Rolando Boulevard. Head downhill and then go left on Lerida Drive and look to the right for the fifth “catwalk” at 1.2 miles. This “catwalk” is all uphill, with four sets of stairs for a total of 30 steps. At Marraco Drive at the top of the stairway, turn left onto Marraco Way, walking uphill where Bonillo Drive joins in on the left. At this point Marraco Way changes its name to Lagrono Drive. Follow it around to the right where it merges with Lorca Drive. Pass Arendo Drive on the right and at the corner of Lorca Drive and Loca Drive, look south where Loca Drive would head if it were not the sixth “catwalk” at mile 1.6. 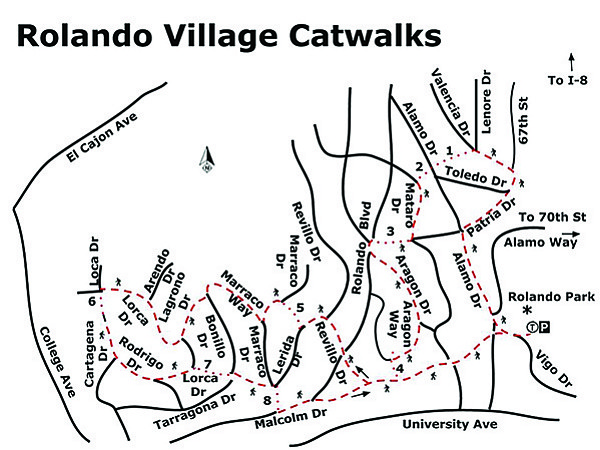 The sixth “catwalk” is the only one that has some wood steps followed by cement steps, for a total of 38 steps down to the Cartagena Drive cul de sac. Walk down Cartagena and take Rodrigo Drive to the left and then Lorca Drive to the left. At mile 1.9 will be the seventh “catwalk” on the right, which has a series of 4 step sections for a total of 65 steep steps that almost tumble down to Bonillo Drive. Cross Bonillo Drive and head up Lerida Drive. Where Marraco Drive joins Lerida Drive, look right for the eighth and final “catwalk” at mile 2.0, which has three sets of steps for a total of 34 steps. At the bottom of the “catwalk,” turn left on Malcolm Drive and cross Rolando Boulevard. Continue on Malcolm Drive where you will see the bottom of the fourth “catwalk” at mile 2.2, completing one of the wings of the butterfly loop. Continue on Malcolm Drive to Alamo Drive and turn right on Vigo Drive to complete the second butterfly loop and to finish the walk at 2.4 miles.

Since this is an urban trek within a close neighborhood, be respectful of residents whose homes are next to the stairways and “catwalks” and refrain from excessive noise. Like the “secret stairs” of La Mesa, you may be hard pressed to find native plants along this trek. Largely, you will be encountering a variety of planted cultivars including roses, various succulents, and bougainvillea. For the best variety of colorful blooms, visit in Spring.

Difficulty: Moderate to difficult (because of the steps and rolling hills). Highest elevation over 1000 feet; lowest elevation less than 400 feet. Dogs on leashes allowed on city streets. Facilities in Rolando Park.