Instead of a heartfelt hug, Inna fires a hard right cross to Reina’s chin. 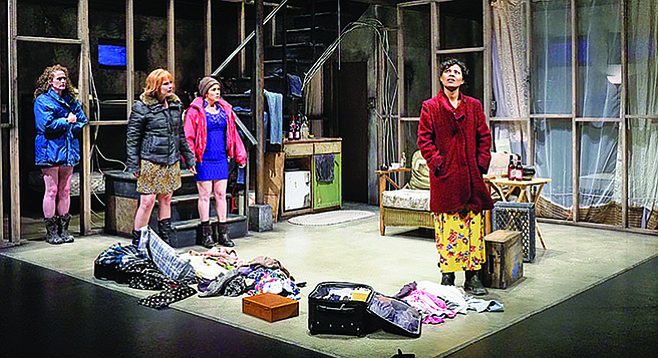 Martyna Majok’s ambitious Queens plays like a prospector who has found a giant gold nugget in the wilderness. Problem is: the prospector hasn’t a wagon big enough to carry it out, or an axe to chip it down.

Queens couldn’t be more topical. The basement of a large building on 1713 Putnam Avenue, Queens, NYC, is a half-way house for undocumented female immigrants. Like the famous Underground Railroad, only stationary, the basement apartments provide temporary sanctuary for women from around the world. They seek jobs, most often cleaning houses. “Us kinds of people,” says one, “we take care house, take care children. Rest of country handles rest of country. But us, we do homes.”

Those lucky enough to have jobs estimate the value of, say, a dress, by the number of work hours it took to buy it. For young Isabella, each hour is another one away from her seven-year-old daughter and ailing mother in Honduras. “I work,” she says. “I don’t know the history of five minutes ago.”

Much as they would wish it otherwise, they are behind enemy lines, an inspector’s whistle away from life on the streets, or deportation. Like prison inmates, they stifle vulnerability: trust no one, even mark the level of a milk container to see if someone’s sipped. “These days you don’t know who people could be.”

Queens is, in effect, notes from an underground few would know, and it opens with a punch to the jaw. Though her name means “queen” in Spanish, Reina is from Poland. She came to the safe house just after 9/11 and stayed for 16 years. Now she owns the building.

Young, bruised Inna, from Ukraine, came to America to find her mother, who abandoned her many years ago. Reina says just enough for Inna to believe she’s found her mother at last. Instead of a heartfelt hug, Inna fires a hard right cross to Reina’s chin. As the play proceeds, and goes back and forth in time, we learn that Reina has embraced the materialistic wing of the American Dream. In 2017 she’s the queen of her palace, and Inna isn’t the only one who wants to deck her.

The play flashes back to Reina’s first days at the basement. In David Israel Reynoso’s set for the La Jolla Playhouse, the rooms are just wooden frames, as in-between as the inhabitants. Old clothes, hanging or in stray piles, dominate the scene, save for an opening look at the entire building, which then rises like the Mother Ship to expose the skeletal interior.

Disillusioned to the core Pelagiya, from Belarus, runs the place. “Moving means to forget sometimes,” she tells Isabella, choosing which clothes to pack for Honduras. Pelagiya and Isabella came to America to become something. Aamani, the play slowly reveals — details are sketchy throughout — was something in Afghanistan. A renowned poet/artist, she left before the Taliban seized control. She hoped the world would “find value in what I have to offer.” It didn’t. Now she must find new ways to express herself: “If I don’t say who I am, I don’t exist.”

The group begins as wary strangers, eager to withhold personal specifics. The long first act rises to a surprising bond (building a bond needs time; nonetheless, act one could use a trim). Each opens up. Aamani locates several stashed bottles of hard liquor to lubricate tales of hopes and horrors. Though from diverse backgrounds, they share the fact of an uncertain odyssey. Act one ends with them donning their best outfits and heading out for the clubs.

Though most of the characters are impressionistic, Denitsa Bliznakova’s costumes reveal them to a T. The go-to clubbing choices suggest that, though they’d love to sashay in chic finery, these mostly humble outfits cost many a work hour.

Queens resembles a giant gold nugget because the vitally important subject is so rich. But it needs shaping, a clearer presentation. The first act takes time to introduce the women, but not to round them out. They are their issues, pretty much. When the play leaps forward to 2017, the women disappear, and new ones appear — so, four new ones too get to know. The jump’s inevitable, given the structure, but frustrating since we barely know the originals.

Queens is simply hard to follow. The nonlinear back and forth works against coherence, even though switching to a new group of immigrants allows the playwright to make sharp, telling observations (“do they think I’m having fun in America?”; are they running from turmoil or heading into it, or both?). Lead by Brenda Meaney’s almost soulless Reina, the cast performs with obvious skill and versatility. But their accents — well coached by Christine Adaire — are at times so accurate, the words are hard to grasp.

Queens is fascinating and frustrating. The subject deserves a huge canvas. Though filled with the playwright’s tough compassion and packed with insights, the complexities often get in the way. At present it follows the rise and/or fall — depending on one’s perspective — of Reina. If so, then the ending could stress that there may be a light at the end of the black hole.