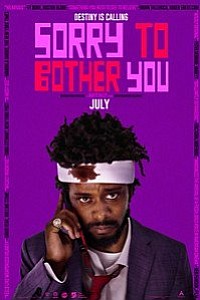 I find it quite appealing (sic) that you have a blatantly racist film reviewer on the payroll. Scott Marks gives 0/5 stars to any movies staring black people. A direct quote from Marks’ review of Sorry to Bother You, “The whitespeak-from-black-lips...”. As if black people should only talk in gang speak or something? What does skin colour have to do with the way people speak. Despicable that this allowed in your publication.

Dear Greg, I can't say for certain but perhaps Mr. Marks was referring to this. Also, Saturday night live did this recently. And of course, both Eddie Murphy and Dave Chappelle alter their voices and speech patterns when speaking in the voice of white people during their routines. As for your claim about his ratings, three out of five stars for Uncle Drew!

Why do I get the feeling that Shame Greg has yet to see the movie? “The whitespeak-from-black-lips...” refers to a gag that had pretty much played itself out in the trailer. That's what I was criticizing, not gang speak. It's the filmmaker goofing on the way whites react to hearing a black voice at the other end of the phone pitch. You'd have known that had you seen the picture. The film earned it's 0/5 because the pace moves in fits and starts, the satire is both obvious and amateurish, and I've had diarrhea that's more consistent than Riley's scatter-gun approach to structuring a comedy.
I also despise "Schindler's List." Does that make me pro-Holocaust?

Ewww, Scott, TMI. Save those medical reports on body elimination for your proctologist. ;-)

It was my duty.