“I always joke that we need a smaller house and a bigger garage." 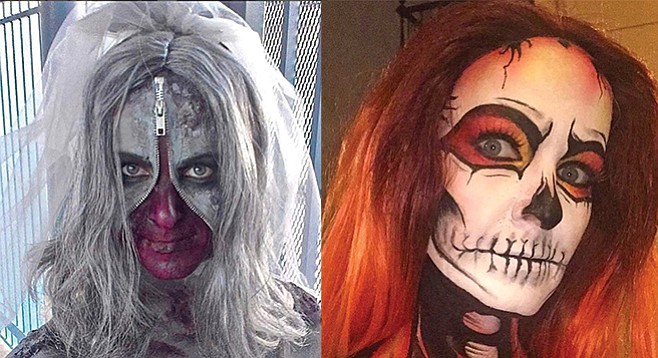 Sheila Szilagyi-Noseworthy is getting the upstairs bathroom remodeled in her pretty Poway home. “It’ll be nice,” she muses. “But I always joke that we need a smaller house and a bigger garage. That’s my dream, ultimately, to have play space, creative space. My hubby is really good about letting me go in the garage at night for hours and hours, and the kids don’t come in. I have my country music, which they hate, so it’s a good way to keep them out.” Besides, cosplay is Mom’s thing, not theirs. 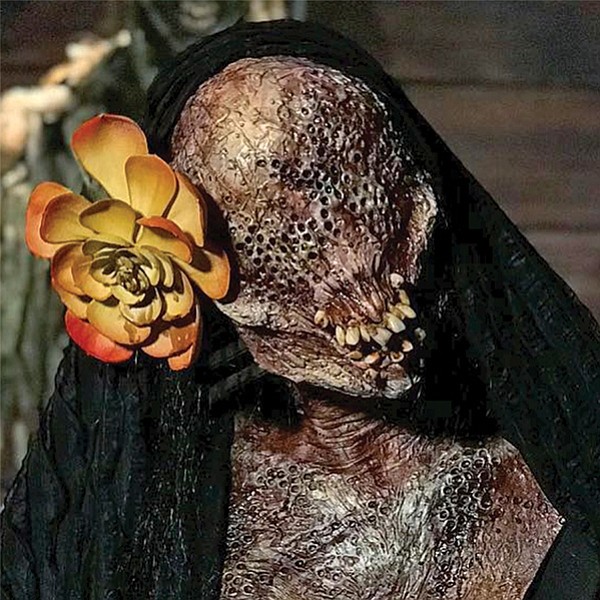 HBO is skipping this year’s Con, but the undead Night King from its hit show Game of Thrones will still be in attendance — or at least, a genderbent version of him, with Szilagyi-Noseworthy’s warm heart beating underneath the frozen-bone exterior. “The zombie stuff is my favorite thing to do,” she says; it’s how she discovered her delight in making herself monstrous. Every Halloween, nearby Creekside Elementary does a haunted trail fundraiser for its STEM programs called Creepside. One side is for the kids, the other is intense enough to offer early exits for adults who can’t take any more. When Szilagyi-Noseworthy was asked to help out, she bought a wedding dress at a thrift store and a zipper from JoAnn Fabrics, dyed and painted the dress, and applied the opened zipper to her face to create the effect of removable skin. 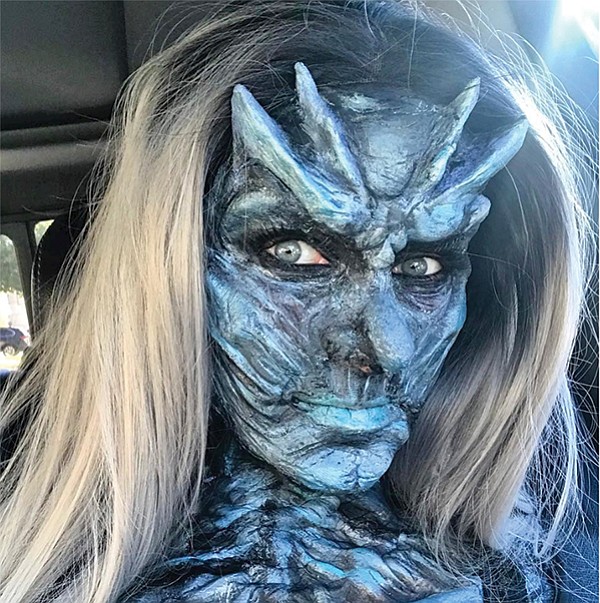 “Nobody knew it was me, which I loved,” she recalls. “It just gives you this license to be really creepy and get out of character. I think that’s why a lot of people do cosplay. You’re shy or uncomfortable in the real world, and then you get to put on this persona. It’s so easy to switch, because you don’t recognize yourself in the mirror. Last year, I was chairing it, so I wasn’t allowed to be too scary, because I had to manage things. But I just wanted to be a zombie and hide in my haunted house.”

The Night King was a bigger challenge, as he sports a natural crown: a series of bony protuberances sprouting from his bald blue pate. A paintable foam latex prosthetic seemed the best option, but wasn’t readily available, because “the Night Queen isn’t actually a character. I make all my own props, because they’re hard to find for female characters,” including spiky, clay-over-wire shoulder guards that help her feel secure amid the Con’s close-quarters hurly-burly. But the bone crown proved daunting. 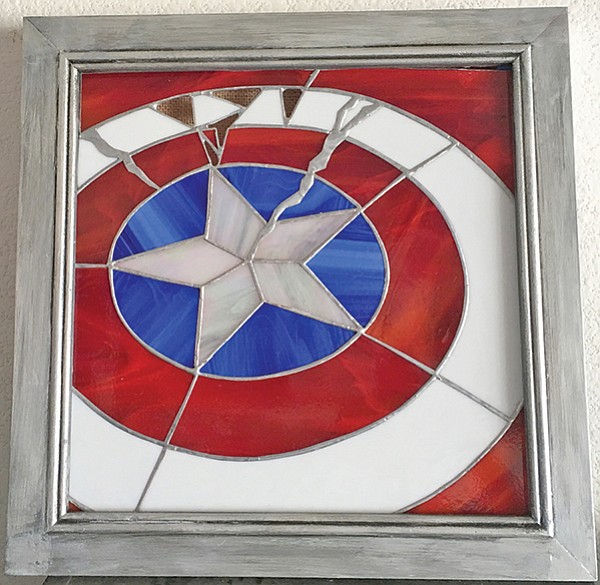 Salvation came, in appropriately terrifying fashion, via makeup artist Jonahtan Aspittle. “When you hide in your garage late at night, or paint your face in the bathroom mirror, it can be isolating,” says Szilagyi-Noseworthy. But she found a tribe in the makeup effects community. “I follow Jonathan on Instagram. He was doing a demo for the International Makeup Artist Trade Show in Los Angeles this January, and his model fell through. I was like, ‘Please make me a monster! And in return, just teach me; narrate what you’re doing.’” What he was doing was a riff on the theme of trypophobia, the fear of small holes clustered together. “I sat in a makeup chair for two and a half hours, and the crowd watched” as he transformed her. When she later requested custom facial and chest prosthetics for the Night Queen, Aspittle was happy to oblige. 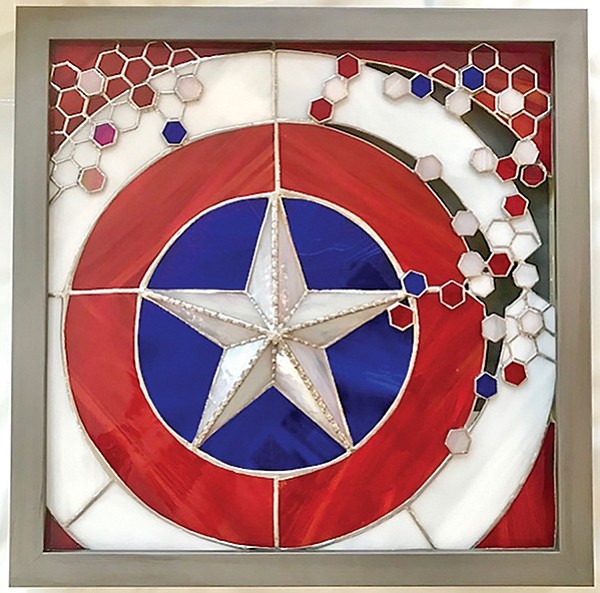 Other bits required less special-effects community and more workbench ingenuity. In episode six of last season, the wintry Night King heaved a spear tipped with an enormous icicle toward a fire-spewing dragon. Inspired, Szilagyi-Nosworthy wrapped a PVC pipe with metallic thread, and then used a heat gun and moldable plastic to transform a $4 Walmart lightsaber into a glowing icy spearhead. The heavy handle “got me kicked out of Wonder-Con, so now I’m thinking pool noodles and duct tape to lighten it up. I think I have a 50-50 chance of getting it in” past the Con’s weapon-wary gatekeepers. “Though last year, as Ghost Rider, I had a very light plastic chain, and they zip-tied it to me.”

Even so, she estimates that she posed for “hundreds and hundreds” of photographs during the Con, which is part of what justifies all the time and expense. And there is time and expense. “I try not to count how many hours; if I did, I would be horrified.” What’s more, “one ounce of body paint is $14. I’m 43; I have two decades on most of these girls who cosplay, which is intimidating and, um, kind of badass. You always joke that the paint hides the wrinkles, but you can’t really practice; you can’t throw away $50 just to see how it goes. So when my husband asks, ‘What’s your goal?’ I say, ‘If I could get just one thing of free paint…’ The younger girls with the massive Instagram accounts who do sexy photoshoots, they get stuff all the time. Sometimes, it’s a little frustrating. But I do it for fun. I don’t have cards to hand out or anything, which I notice a lot of cosplayers do. I would feel really self-conscious about it. If I’m saying, ‘Yeah, this is me,’ then I revert back to myself,” which defeats the purpose.

The Con’s other big no-show is Marvel Studios, which is skipping its usual Hall H megapanel this year. Here again, Szilagyi-Noseworthy will help to stand in the gap, this time by contributing a piece of stained glass based on Captain America’s shield to La Bodega Gallery’s Marvelous art exhibition on July 21. It’s not her first treatment of the subject. Glass is almost prohibitively expensive, but one deep dive on Craigslist yielded word of a giveaway at an abandoned thrift store in Oceanside. “I spent days in there, filthy, getting sheet after sheet of vintage glass with depth and color that can’t be replicated. I got this gorgeous opalescent white with tiny age cracks on its surface. It would have made great angel ornaments, but I saw Vibranium,” the mystical metal that makes up the First Avengers’s dynamic disc. “I sized my piece to exactly the amount of glass that I had. But vintage glass is very thick and uneven and hard to cut… and I broke it. I was so upset, because it’s one-of-a-kind glass. But you know, Captain America’s shield does get battle-worn. So I changed the leading a little, and now my son says, ‘We have to keep that one.’”