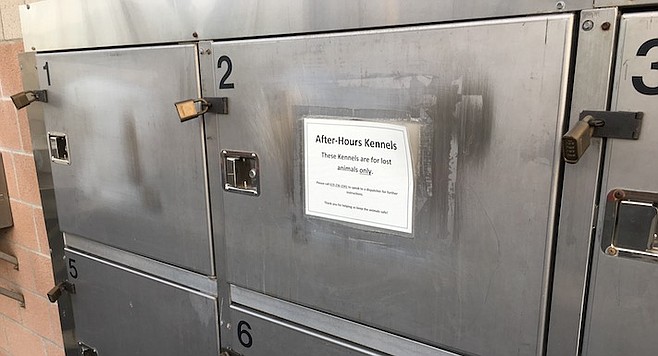 The San Diego County Department of Animal Services just got a lot smaller. As of July 1, the county no longer provides animal services – rescues, adoptions, enforcement, to the cities of Carlsbad, Del Mar, Encinitas, San Diego, Santee, and Solana Beach.

The county board of supervisors, in a budget cutting move, made it known in 2017 that it would seek bids to take over operations to cities that contract for its animal services. The San Diego Humane Society was awarded that contract. Their offices are right next door to the county’s Mission Valley kennels and offices.

One has to wonder, now that the county is only responsible for animal services in the unincorporated areas, what will happen to the department’s three county centers, officers and employees, and their pensions, equipment, kennels, and trucks in Mission Valley, Carlsbad and Bonita? All three of those centers are now closed. None of those issues were mentioned in press releases issued by both organizations.

Responding to calls from citizens and donors, John Van Zante, spokesperson for the independent Rancho Coastal Humane Society in Encinitas, says nothing will change on their end.

“We are, and will continue, to provide adoptions, education, medical, the San Diego Wildlife Center, and care of animals for families in crisis,” said Van Zante.

Rancho Coastal, known throughout the U.S. as a respite and re-introduction center for animal victims of major disasters around the country, is an independent humane society, funded by donors, and a Cardiff by the Sea thrift store that generates almost a million dollars a year.

Some in the animal rescue community are questioning, what is the goal of the San Diego Humane Society, which seems to get bigger ever year? Already providing service to the cities of Imperial Beach, Poway, San Marcos, Vista, in recent years they took over animal services operations in Oceanside and Escondido. They purchased San Diego Pets Magazine, and operate Project Wildlife. And now taking over animal services in six other cities.

The employees union got involved with the officers and potential re-hires with the Humane Society, so they’re most likely taken care of. The use of buildings, kennels, and equipment are being negotiated. Unused trucks and equipment sit behind a secured parking lot at the Carlsbad shelter.

Van Zante thinks the Humane Society take over might be a good thing – providing a different approach. He says that the old county department always got a bad rap, unintentionally. When it came to hoarders or abuse enforcement, TV news pieces on animal rescues always seems to end with the line, “housed at county animal control shelter” and images of armed officers removing animals.

STORY CLARIFICATION: My apologies for some incorrect information in this story. The following was sent by Daniel DeSousa, the director of San Diego County Animal Services, to the writer through the Reader website, on July 17.

"Your article regarding the closing of the County of San Diego Department of Animal Services' three shelters is inaccurate.

The San Diego Humane Society did pick up the contracts for the six cities which we used to cover and the shelter on Gaines Street was returned to the City of San Diego (who owns the building) and SDHS is utilizing that facility as of July 1st.

The Department of Animal Services is still responsible for providing services to the unincorporated portion of the County and we are operating out of our shelters in Carlsbad and Bonita. Thus to say that those two shelters are closed is incorrect."