Where does hate begin? 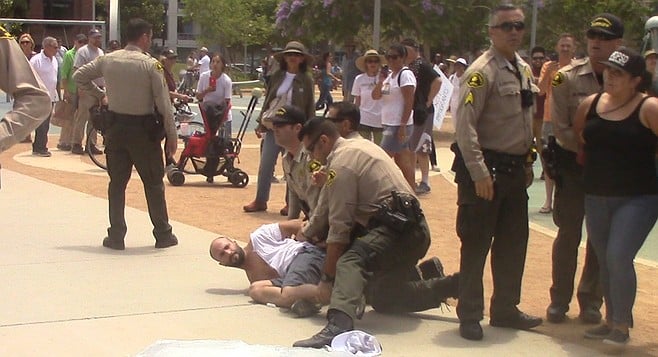 When 75-year-old Dan Russell isn’t cleaning up trash from the side of highways he participates in civil demonstrations, mostly holding his “Build the Wall, Enforce the Law” sign. 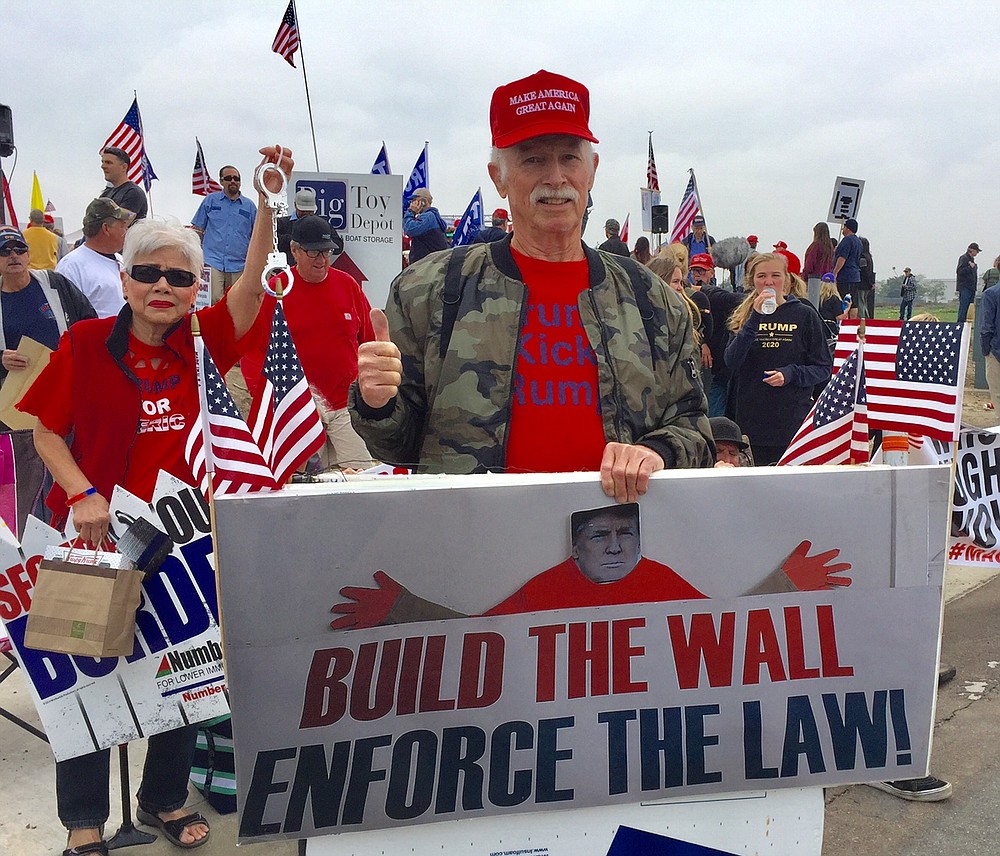 Russell called the sheriff’s department and was told he had plenty of time to file charges.

On June 30 brought his sign to the Families Belong Together demonstration at Waterfront Park next to the County Administration building downtown.

Video of the event shows Russell presenting his message as anti-Trump protesters walk by yelling and cursing at him. 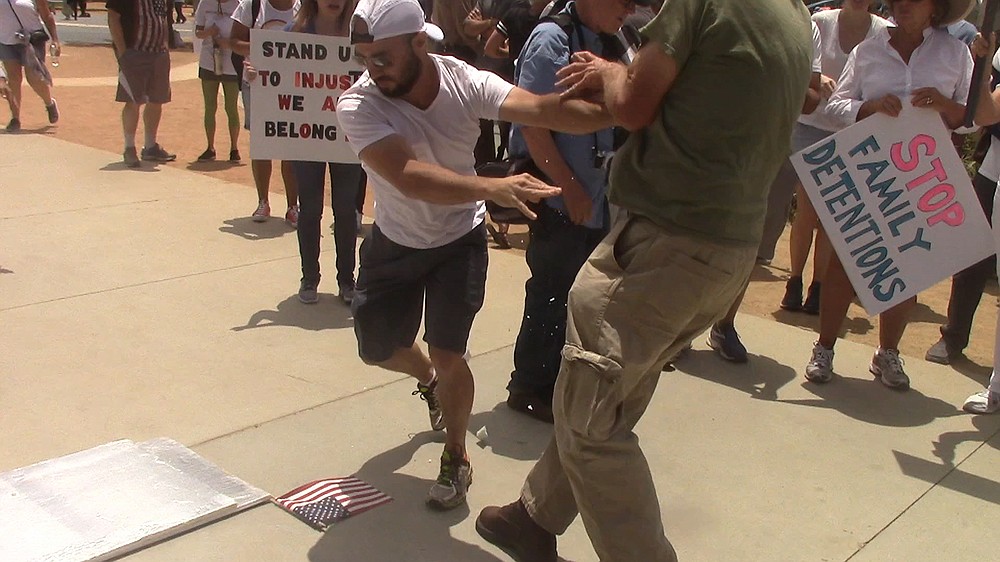 Then 36-year-old San Diego attorney Benjamin Siminou took Russell's sign and ran away with it. Russell gave chase. Siminou dropped the sign and as Russell reached down for it Siminou pushed him to the ground.

When Siminou picked up the sign and continued his flight San Diego deputy sheriffs apprehended and arrested him.

Russell says he then saw a woman jumping on his sign and when he tried again to retrieve it, deputies detained him and the woman.

He says, “It was the first time in my life being handcuffed — a little surprising at the time but no big deal.”

Russell says there was no altercation with the two protesters before the incident.

A sheriff’s department spokesperson says Siminou was booked into San Diego central jail for robbery done with force, which is a felony. Bail was set at $100,000 and he bailed himself out. 35-year-old Julie Corales was cited for vandalism and released.

Russell was escorted to his car and given a case number.

Russell was told Siminou would spend a few days in jail but later found out he is an attorney and did not spend any time in jail.

He began making phone calls to press charges. He says he spoke to Mike Duffek, a manager at the County Administration building, and was told someone would get back to him about how to press charges.

Russell called the sheriff’s department and was told he had plenty of time to file charges and to wait until July 11 for someone to call him back. He later learned through a second-hand source that Siminou was scheduled to be arraigned on July 9.

On July 9 Russell called the D.A.’s office and was told they decided not to file a felony charge against Siminou (the arraignment that day was cancelled) and would transfer the case to the City Attorney’s office to be reviewed for a misdemeanor charge.

City attorney Mara Elliott’s chief of staff Gerry Braun responded to my request for comment by accusing me of advancing the positions of a hate group.

Braun later gave a second response stating the City Attorney’s office received the case from the D.A.’s office July 12 and their criminal division is reviewing it for possible misdemeanor charges.

Dan has a wife, a family and owns a home in San Diego. Fireman get a pretty good retirement. The life-threatening illness that he has may be the result of breathing so much toxic fumes as a fireman, trying to save people's lives, homes and other property.

Mr. Russell is an Army veteran and retired fireman of 27 years. He spends several hours a day cleaning up trash because he wants communities and roadways to look clean, not because he doesn't have anything better to do. Is that what you are thinking, only a homeless person would spend so much time picking up trash?

"City attorney Mara Elliott’s chief of staff Gerry Braun responded to my request for comment by accusing me of advancing the positions of a hate group."

--Not that the City Atty's Office has a position on either Trump or the Border Wall, right? "Wink wink!"

When an elderly man who has spent his life in public service is the victim of an attack why would law enforcement officials treat him such that he feels he is being given the runaround? When a reporter questions the City Attorney, the top law enforcement official for misdemeanors in the City of San Diego, about whether the perpetrator of an attack against an elderly man will face charges, why would her spokesperson's first reaction be to make a serious accusation against the elderly victim? and against a reporter who sees the need to tell his story? It's a completely false accusation by the way. Telling the story of an elderly man who was peacefully demonstrating before he was robbed and injured is not advancing a hateful position. I don't advance positions of any hate group and I believe Russell when he says he is not part of a hate group and does not hate his political opponents. "The people yelling at me and attacking me are the hateful ones," he said.

Dan is not a member of a "hate group," but that is beside the point. Even members of hate groups have a right to be protected by the law. Even prominent attorneys, like Siminou, are not supposed to be ABOVE the law. The City prosecutor is sworn to uphold the law. Labelling your political opponents "haters", "Nazis" or "white supremacist" has become a popular way of marginalizing them and dehumanizing them. It devalues the meaning of these terms, when half the population can be gratuitously labelled "Nazis" and it justifies such attacks in the minds of leftist extremists. Mara Elliott campaigned on the promise to make the City Attorney's office LESS political. It seems she has just drastically ramped up the politics. Very sad. It seems that Mara Elliot and her staff may the real "haters". Here is some video of the incident. https://youtu.be/jtf6yBJnrJg

There is another page of info, with more details here. 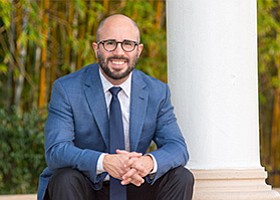 At the very least, I hope this incident was reported to the CA State Bar for investigation of Siminou's actions. As for Mara Elliott, she should spend less time worrying about being "political" and more time doing her job. If she didn't want to enforce already existing laws, she should have become a Federal Judge! (SI)

Why don't you do it instead of sitting on your trump-liking butt and complaining. Actually do something productive instead of hating everyone including yourself. Your "leader" will fall soon...

Russell "earned" his money by hanging out at the firehouse playing with his hose. He's a fascist and is only perpetuating his very weak and a misguided ideology by mimicking his orange-skinned leader. He's a hate monger who should be picking up trash instead of promoting misunderstanding and vile thoughts. Free speech is not hate speech or other speech that is intended to decay society. Just like every German cried they were never part or associated with the nazi party following WWII, once the dolt in the White House is gone, all of his followers will deny him. The attorney should sue Russell for inciting public discord.

Anyone who disagrees with you is a Nazi and deserves to be attacked? Got news for you, buddy... YOU'RE the Nazi here.

Calm down Saint-ahem-Jerry. You sound like you are on the verge of a psychotic break. It's ironic that the people with anger management issues are the ones always calling other people "haters".