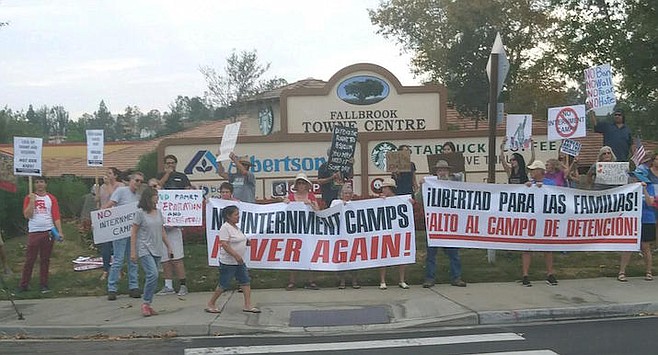 “Do you know who founded Fallbrook?” organizer Ricardo Favela blurted out on a bullhorn in front of about 60 fellow protestors in a late afternoon rally Monday, July 9. 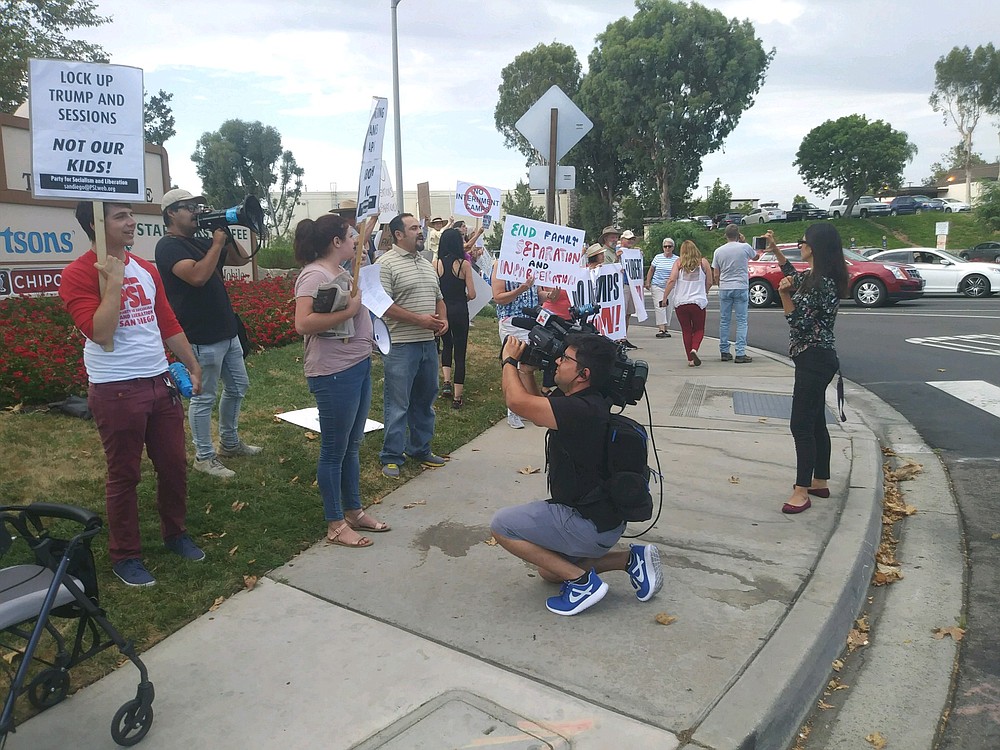 Favela says he got support for this rally from the Fallbrook Democratic Club and a group called Indivisible Fallbrook.

“Reche,” said one who knew the name of Fallbrook’s founding father.

“Do you know where he was born?” Favela asked. 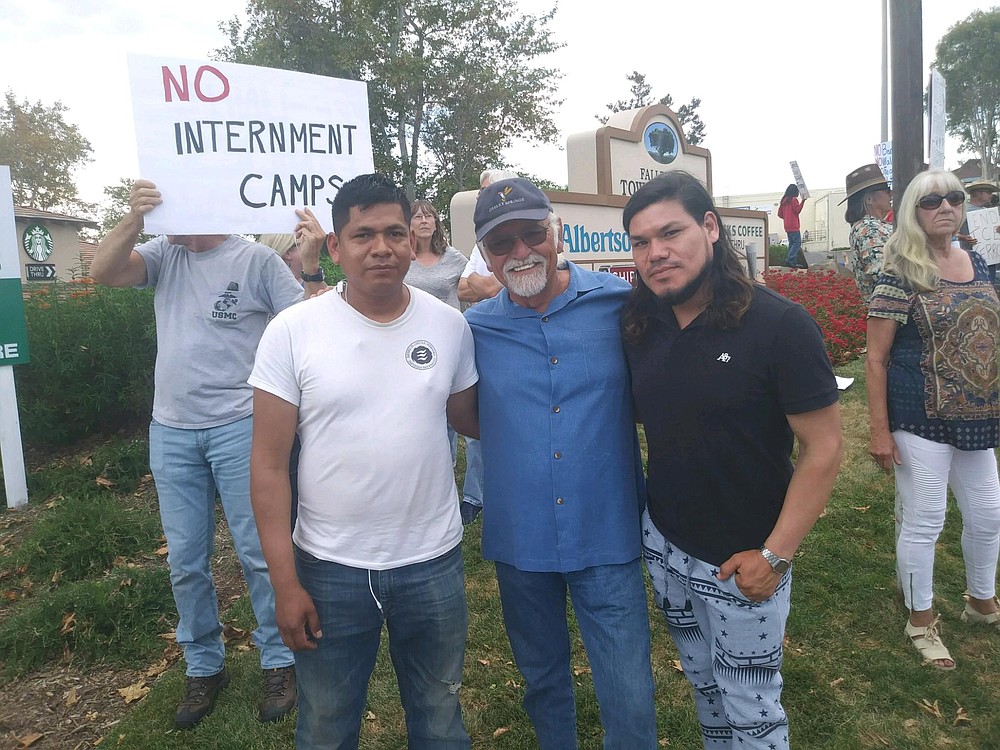 Luis, 32 and Rodrigo, 26. Rodrigo said that they were surprised to see white people standing up for people like them.

“No. He was born in Quebec,” Favela clarified. ”He was a Canadian immigrant. Fallbrook was founded by an immigrant named Vital Reche. Today it might be possible that Vital Reche and his family would end up in a detention center.”

Favela organized this rally to protest the proposed detention camp at Camp Pendleton which reportedly would house up to 47,000. 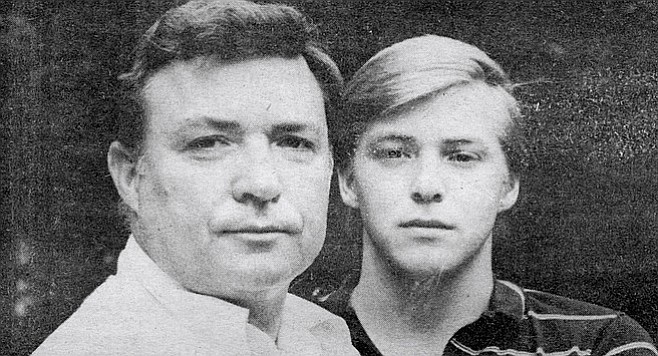 Tom Metzger and son John. From 1988 Reader interview with John.

While public protests against Trump immigration policies are not unusual these days, this one was in Fallbrook, longtime home of world-famous skinhead Tom Metzger who lived here from the late 60s to the mid-90s. 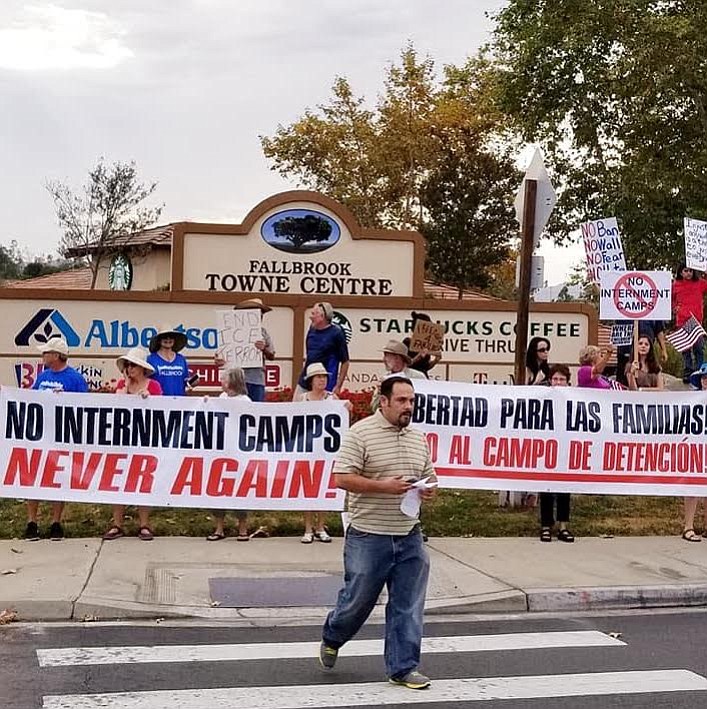 Metzger, a former Ku Klux Klan Grand Wizard and founder of the White Aryan Resistance or WAR, moved from Fallbrook to Indiana about 22 years ago. His hate-speak landed him in jail. Metzger and WAR were bankrupted following a $12 million civil judgment awarded by an Oregon jury who found WAR influenced the murder of an Ethiopian man.

Favela, 41, was born and raised in Fallbrook. Long before he had Trump, he had Metzger to motivate him to organize public protests.

“When I went to high school it was the height of resistance to White Aryans,” recalls Favela. “Metzger and his group were considered the most racist in country. He instructed his people to go out and do beaner bashings. I lived through that in high school. My friend’s dad got beat up. They went after people who were working in groves.”

Favela was 16, he says, “When I staged my first protest in Fallbrook in 1993. It was over a kid getting beat up by the police. We had a protest that started on Main Street at Builders Emporium [where Grocery Outlet is now]. Metzger was there filming it. People showed up with Confederate flags on their trucks. They yelled ‘Fuck you, go back to Mexico, beaners.’”

Although he says a Minutemen group tried to destroy a local migrant camp ten years ago, Favela says the Fallbrook hate fervor receded when Metzger moved. He says the public reception was a lot nicer for his anti-Trump rally on Monday.

“We didn’t get harassed this time,” Favela tells me. "There were a lot more positive honks than middle fingers or ‘Go Trumps’.”

At the beginning of the rally one man verbally accosted the protestors and aggressively yelled pro-Trump sayings. “I could smell alcohol on his breath,” says Favela. As that man walked away a sheriff deputy pulled him over and spoke to him for about 10 minutes but did not arrest him. Four deputies stayed in the background and did not confront the protestors.

Favela says he got support for this rally from the Fallbrook Democratic Club and a group called Indivisible Fallbrook. The assembled group did call-and-response chants against Immigration and Customs Enforcement/ICE such as “How do you spell Nazi (I-C-E)...How do you spell racist (I-C-E)…How do you spell criminals? (I-C-E).”

Fallbrook’s racist history was news to Luis, 32 and Rodrigo, 26 who both work at a local nursery and happened to be there for the rally. Neither speak English. Through an interpreter, Rodrigo said that they were surprised to see white people standing up for people like them, Mexican nationals working in agriculture.

I asked Favela about recent rumors that Metzger, 80, had moved back to Fallbrook from Indiana. “We’ve been monitoring it,” says Favela about his group called Fallbrook Human Rights Committee. “Recently someone told me he tried to buy an ad in the local paper announcing his comeback but the paper refused. I heard there were some folks in the chamber of commerce who were worried about it…. I think he moved to San Jacinto.”

Metzger runs the website resist.com. As recently as last week he was posting comments on his Twitter account @terribletommy including: “Do not play the popular new game NEGRAPHILIA its a loser,” “Get off your ass white man,” and “I advocate all white women who have decided to have sex with blacks please take advantage of your free abortion opportunities.” Historian Metzger points out that if the South had just used Vietcong style guerrilla tactics it would have won the Civil War.

Favela says his first Fallbrook anti-Trump rally a week earlier only drew 30 people. “We doubled that this time. It shows that Fallbrook can move past the stigma it has been known for. This time Telemundo, Univision, NBC-7, and Channel 8 showed up to cover us.”

I find it quite humorous that your facts are not straight. You can obviously notice that in the beginning of the article. "Tom Metzger who lived here from the late 60s to the mid-90s." But, yet you state "moved from Fallbrook to Indiana about 12 years ago." Are you able to do simple math?

However, I must say that several times through the years I've been tempted to punch the editor of the reader in the nose. But, somehow didn't think it was worth my time.

It should have read 22 years not 12 years. You are correct. It will be fixed.

Thank you for the heads up.

However, you will not mention what you privately emailed me saying we are not allowed back to Fallbrook. HAHA...

FYI, the math is still wrong. He was there until 2006 which would be correct for the 12 years. Not 90's at 22 years moving. Do some homework dude. What a freaking joke writer.

That was a joke Laurie. Of course Fallbrook would love you back in town. It's a free country. You ("we") are welcome to live anywhere you want. HAHA....

In the 80s Tom Metzger had his own TV show called Race and Reason. Here he is interviewing Orange County "Combat TV" host Wally George. https://www.youtube.com/watch?v=YamnBBIlaIg

At the end George talks about how history will be written "long after you and I are long gone." George then said he hoped Metzger would go first. George did not get his wish. He died in 2003. Metzger is still kicking.

Not sure what your point is. I know a lot more than you as I am his daughter. So, no need to try to "educate me". Point is, you're an awful writer and editor, as facts are not straight. That's all. Good riddance.

As a Fallbrook resident, I really don’t care what date Tom Metzger moved away and took his band of racists misfits with him. Fallbrook, while not perfect it’s far better off without the overtly racist presence.

However, Tom Metzger clearly did not need to be mentioned in this article. What does a former high- profile racist have to do with the protest happening on that corner every Monday? They are protesting the possible internment of asylum-seekers at Camp Pendleton , a base which is by its proximity and size is a large part of Fallbrook life.

While it may be an interesting byline the two are totally unrelated. Could there not have been an article covering that without using click bait? Fallbrook doesn’t need t to be reminded of its racist past. It is , today, a fairly diverse community. With a diversity of ideas, as represented in part by Monday’s protest

Cbad- I think it was clear in this article that the common thread was the same Fallbrook local who led a rally at 16 is now, at 41 leading another Fallbrook rally that also has racial undertones. So therefore, the two are not totally unrelated. Also, since you live in Fallbrook, I am sure you are aware that the natives are talking about some kind of return of Mr. Metzger. I don't think many people knew he had moved to the adjacent county. I think to many Mr. Favela represents a profile in courage, then and now.

Ken I get the connection between Mr Favela’s political awakening during the time of Metzger living in Fallbrook. And yes, it is scary to see the rise of white nationalism and Trump’s tacit support of it. And Mr Favela is apprently courageous for standing up for his beliefs. This ongoing protest should receive media coverage, and should on its on merits. 60 people strong and growing.

What i saw when opening this article is the Headline screaming : Metzger has moved to San Jacinto. And then the entire second half of article written about Metzger. I get it: he’s an interesting guy. Maybe a separate article is in order on his activities and whereabouts?
All the stuff about Metzger that didn’t relate to Mr Favela’s motivation and past took away from the space that could have fleshed out this article with coverage of the protest. What could have been included is the point that strong community protests were an influence on Contra Costa County deciding to cancel contract with ICE and stop housing detained undocumented workers in their County jail. The article could have included quotes from other antendees of Monday’s protest. What are they looking for? Are they concerned about specifically housing separated children asylum seekers at Pendleton? Are they concerned, as any civil libertarian should be, about the use of military facilities for civilian law enforcement purposes? These and other questions were left unanswered, or unasked , maybe partly because 50% of the article was about Metzger.

Laurie - you have failed to point out any facts that are not straight, other than 12 years was supposed to be 22 years which was fixed. I am saddened to know that I am a terrible writer. But we all have our own (burning) crosses to bear. And DONT think I for one would not like the Metzgers back. Speaking only for myself, this is a nuclear dumpster fire/trainwreck just waiting to erupt again. Because, as you pointed, Tom never hurt anybody. Right Laurie?

I attended a meeting with Tom Metzger and a number of his "staff" at a home in El Cajon back in the 80's. Tom was well spoken and leadership skills. The people at the meeting were middle class blue collar workers with only high school education. None of them could articulate why they hated "other" people other than "they" were not like them. The KKK was a combination of white supremacy and Christian religion. The saddest part of all this is that Tom Metzger could have used his leadership skills for good but chose evil. At 80 he must be frustrated that all of his work has been for naught. I am sure he loves Trump but he will again be disappointed. (No I was not a member of the KKK but was embedded by an agency that shall remain unnamed)

Cbad- yes good point about the headline and that there maybe should have been quotes from other people. There also maybe should have been quotes from neighboring businesses. But it was pretty long as it was. I wanted to make sure what i thought was the most important stuff got in. Maybe the UT Fallbrook reporter can do it. Oooops. They don't have one.

You’re right Ken - in critiquing the article I neglected to point out the obvious. You are the only one writing about this. Thanks for writing and your point about UT is one of the many reasons I don’t subscribe to it. They apparently think Fallbrook is in Riverside Co