“This is about nothing but love.” 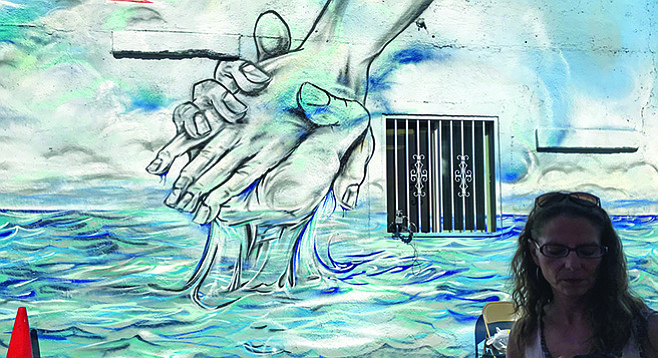 Has anybody seen the movie, Morgan: A Suitable Case for Treatment? About this crazy artist who couldn’t bear to see a bare wall? Each time, he had to fill it with a mural. It was his compulsion. Naturally, they took him off to an asylum.

But this is exactly what’s going on here in City Heights. Swarms of artists are filling its walls with murals. Sides of liquor stores, smoke shops, pawn shops, restaurants are all turning vibrant with suns, seas, snakes in trees, scorpion fish… and today there’s a bunch of people in the alley behind a 7-Eleven. They have scaffolding. They have spray cans. They have paint brushes. They have camera-loaded drones swooping overhead, recording the whole process. 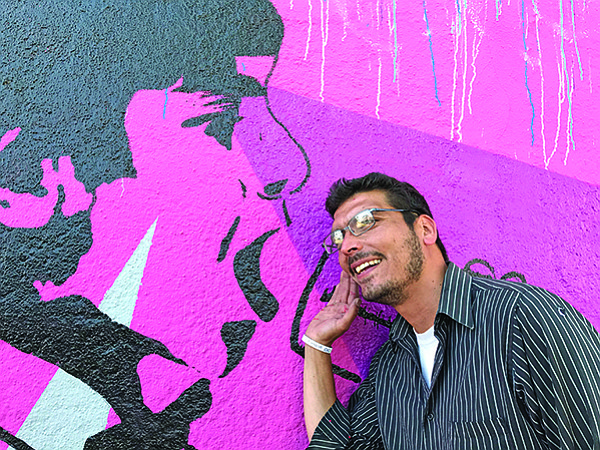 “Look over here,” says Carlos Quezada. He helped launch the Avenue Mural Project. We’re at the corner of University and Wilson. This pink and mauve and black mural depicts a dude singing. “This was the first. Everybody said it wouldn’t last a week before the tagging started. But that was a year ago. See? Untouched. Except here: Somebody has tagged ‘Thank you.’ We’re leaving that.”

Quezada and a few friends launched this crazy idea last year. To paint a Mile of Murals down University Avenue. They do it on a zero budget. He and others often buy the paint and brushes. 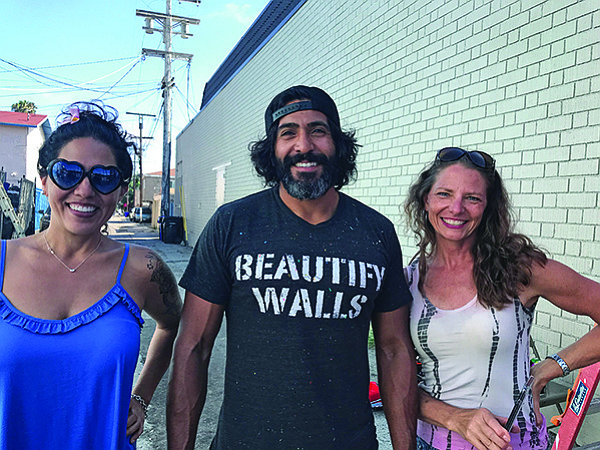 This Sunday, they brought in a heavy: Ruben Rojas, artist from Santa Monica. He has already organized 700 murals across the US. Recently he was invited to Paris to paint a mural there.

“I concentrate on this,” he says. He’s pointing at this stencil-style mural which is just the word LOVE. “I use ‘love,’ or other words of empowerment to counter the constant negativity people encounter in their lives.”

Are people noticing? On Instagram, he has 16,000 followers. He says murals are becoming a phenomenon worldwide. Something about people being participants, not victims. And word’s spreading. He even did one for John Legend.

But artist? Not exactly. “I was in pre-med. Had been in realty 9 years, financial planning 9 years. Was working towards my masters in bio-mechanics when my buddy Evan Meyer caught me doodling. ‘Gotta get you on a wall,’ he said. And this has taken over my life. We started an organization called Beautify Earth. We make stuff happen.”

Ruben says that businesses who allow art on their walls actually experience an uptick in business. 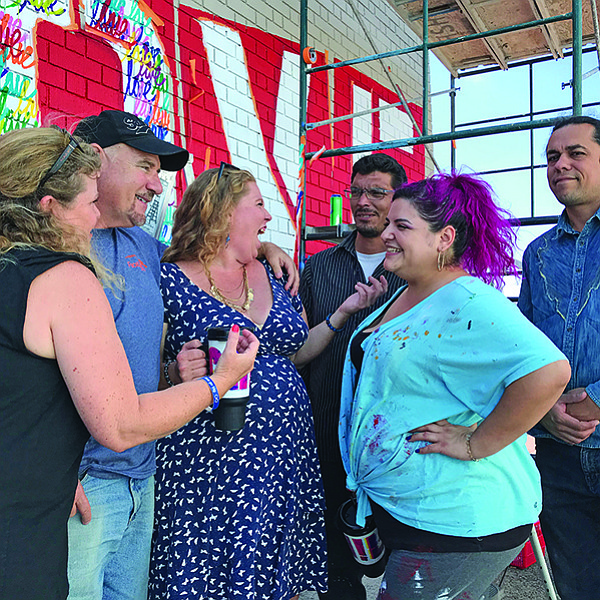 “Really, something beautiful is happening,” says Melody De Los Cobos, an artist who’s helping. “This is about nothing but love.”

Across the alley, on the wall of the Pentecostal Iglesia de Dios, Will Salas is finishing his mystical mural of a hand from the ocean reaching up and gripping a hand from the sky, with the word “Amor.”

On this side, Ruben is almost done. All he has to do is stencil his @rubenrojas tag on the bottom. The drone guy’s launching his flying machine. Videographers hunch into their cameras.