You won't get rich charging Bird scooters either

To catch a Bird 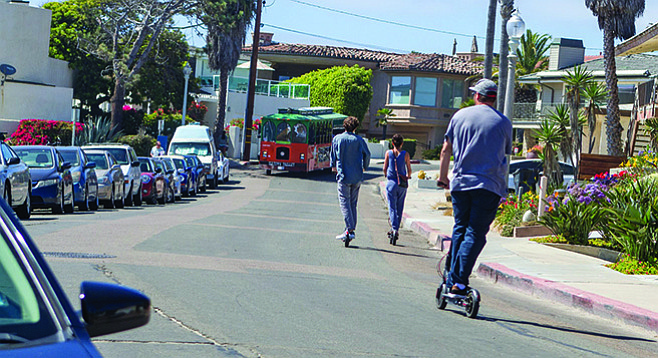 “I’m telling you as a resident over here [in Ocean Beach], that you are in my parking spot,” yelled a man captured on video. 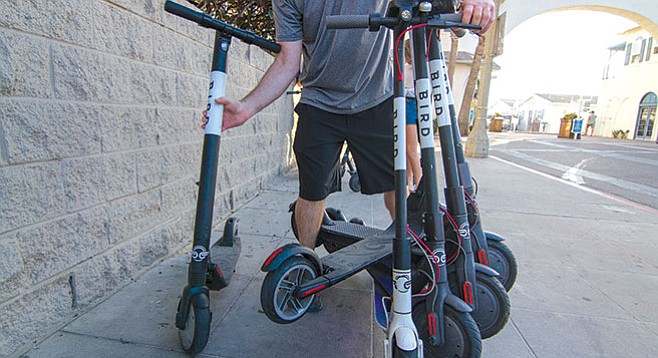 “I’m not the one that puts these [Bird motorized scooter] nests here,” said Roach, a Bird charger who was filming the irate man.

Roach and her girlfriend Amy encountered the angry OB neighbor by Saratoga Avenue, while picking up a Bird scooter on June 7 at about 9 p.m. (The two requested that I change their names for the story.) 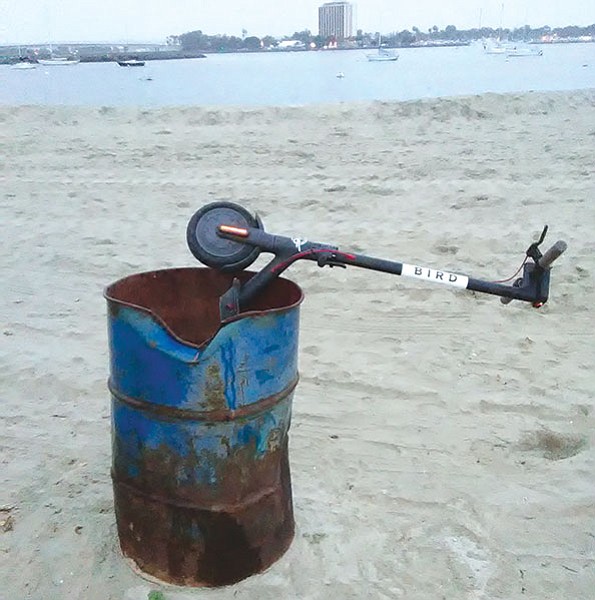 Bird in the trash

“Some crazy guy threw the Bird scooters on the asphalt saying ‘Get these out of here’ and some other guy had to come to our rescue and said ‘It’s not their fault they are [Bird] chargers.’”

The Bird company pays chargers like Roach and Amy, $5-$20 per scooter — but there’s a catch. 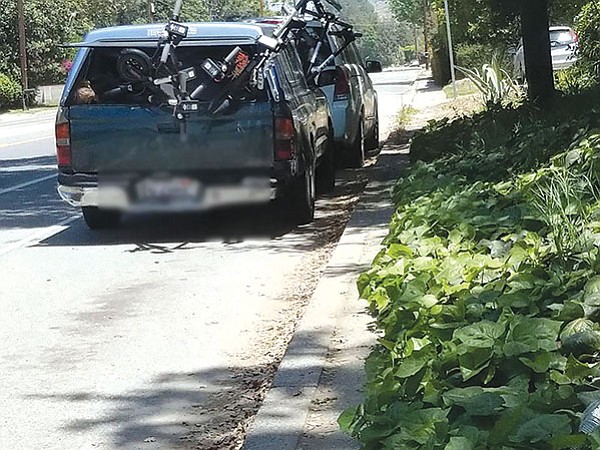 Roach, 39, breaks it down: “First we scan the scooter with a smartphone, load it into our SUV, unload it at our place (in OB), charge it to an outlet (via a “Cord” provided by Bird for $10 apiece), then after the light turns green, load it back into our SUV — by the way [each scooter] weighs close to 30 pounds — and then release it at the Bird designated areas (“Nests”) between 4-7 a.m. — if you release a bird after 7 a.m., your pay will be deducted to half the pay.” 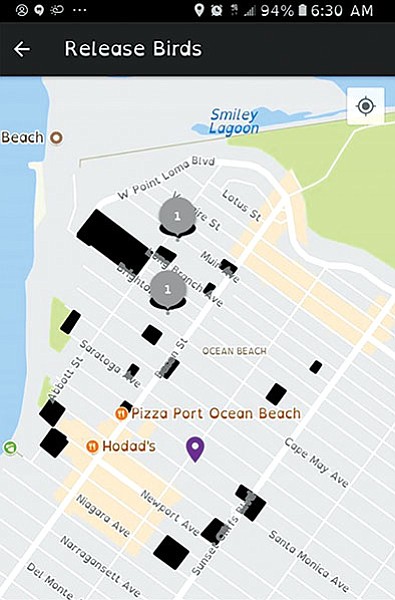 “It’s overwhelming, and it messed up our sleep schedule,” Roach said, “because they only sent us six chargers.”

“…. and if the battery is down to 13 percent, it’s going to require five hours of charging,” Amy added. “I’m lucky if we have 50-60 percent, thats means I need less time to charge. We also have to report any problems that it has, like if it has wobbly handlebars. Sorry to say, but men like to jump curbs, and some like to take them to the skatepark and do stupid ass shit.”

Roach and Amy started capturing and releasing Birds since early last month. They have made about $500, which is supplemental to their DoorDash and Lyft gigs. At times, the gigs crossover to one another.

“We caught an $8 Bird while we had the food in our car,” Amy laughed, “and we still made it in time for the food delivery.”

Roach then added, “…. this [double] gig is hard, you need two people.”

Amy then recalled when she was on a Lyft gig, and saw a Bird show up on her phone. After she dropped off her passengers, she scurried back to scoop the Bird, but was too late.

“Birder” has been Bird charging for the last couple of months. The OB resident, requested for me to change his name for the story as well, because all Bird chargers are on contract. “If you go every day, you can make about $300-plus a week,” he said, “$5-to-$8-captures are very common, above that are Birds that are usually missing for a good reason — [either] someone has stockpiled them, or I don’t really know.”

“They are called 'stink Birds' by that one girl with the video,” Roach said, “have you seen her YouTube?”

She was referring to another female Bird charger who rolled up to a house (on Missouri Street in Pacific Beach) of an alleged “stink Bird,” filmed the confrontation with her phone, and then posted it on YouTube and Facebook.

The May 10 Facebook-shared YouTube video was captioned: “This guy had seven or eight still capturable/on-the-map Birds locked in his garage last night. He had a radio blasting inside the garage to muffle the sound of alarms in the event a charger would come by and alarm the missing birds. I was told that Bird is losing $36,000 daily in San Diego as a result of shady chargers like this one. I was also told this guy has 20 violations with Bird.”

According to many of the Bird chargers, the longer a Bird is missing, the higher the bounty for Bird goes, and the higher they get paid.

“$20 Birds are very rare,” Roach said, “and the catchers probably made it happen (like in the stink Bird video).

“I’ll also use Google maps and then if I see that the Bird is right above a roof, then it’s at a house, and then I’ll report it to Bird. But then sometimes, they are supposed to be in a parking lot, and they are in people’s trunks. Amy doesn’t give a crap, she’ll look into the car with a flashlight.”

The chargers have to wait until a bird is available on their app before they can capture it, then pick it up. But at times, the couple cannot wait. “I was having problems with the [scanning] system,” Roach said, “and I’m sitting there for 30 minutes and it’s after 9 p.m. [and] you cannot even ride them until 7 a.m. That’s why I loaded them up in my car to go catch more. But then other chargers were following us and said 'You haven’t captured them and you cannot pick ’em up early, bitch.'”

The couple was reported to the company and was “restricted to capture for a couple of days.”

Another catcher I’ll call Birder admits to have been on the Bird-snitch side. “I once took a picture of a Bird catcher taking Birds that weren’t ready to be captured, to report them to the company. They ran after my car. [Then] I’ve seen other catchers at a Bird where we got the same one near the same time and I’ve had a couple that got heated.”

Birder is a marathon runner who has competed at the Rock ‘n’ Roll Marathon. “I ran it at about 3:40,” he said, “[at the time] it was like three minutes behind the Boston Marathon qualifying time.”

The minute his smartphone notifies him of a “capturable” Bird in the area, he sprints to it. “It’s like a friendly competitive game,” he said.

The OB Bird catchers say there are fewer “Nest” areas for them to “release” them in Ocean Beach, because many of their neighbors and business owners aren’t so keen to the scooters — and make complaints with the company based out of Santa Monica. Some of the matte-black colored scooters are chucked off of the cliffs in the ocean, and others are thrown into trash cans.

“Then we caught a Bird that was $14 in a tree,” Amy said. “We woke up the neighbor because we kept trying to alarm it (from the app) and this guy got out of bed while we were searching for the bird. It was like 2 a.m. over by West Point Loma Boulevard and Cable Street.”

“He said the Bird has been chirping for days,” Roach said, “it was stuck to a huge branch that would not let go of the handlebars. I went back home, got a chair, came back, and got it out.”

To read this week's story on Lime scooters, click here.