Issa gets a free junket 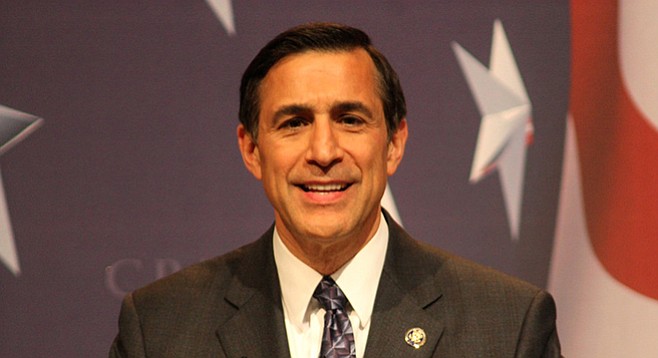 Immediately after Republican House member Darrell Issa announced on January 10 he was finally hanging up his congressional spurs, he and top aide Robert M. Rische III took off for one more glitzy free junket to Las Vegas, courtesy of the Consumer Technology Association. “I have been invited to participate in a [Consumer Electronics Show] 2018 panel, a partnership with CES Government called the “Legislative Outlook for Tech in 2018,” Issa wrote on the disclosure of his $848.96 two-night stay at the Encore at Wynn Las Vegas.

The congressman, who became a billionaire as father of the Viper car alarm, was not compensated for his transportation costs. Rische, Issa’s in-house counsel, got the same room rate, along with $272 worth of coach airfare. “The purpose of my attendance is to learn about emerging technology issues,” Rische wrote. One seminar likely to have caught the attention of the embattled Issa, a staunch proponent of get-tough border policies favored by the Trump administration, was entitled “How Immigrants are Driving Success.” “Immigrants have founded many of today’s leading tech companies and continue to prove to be a critical component in the American Workforce despite an out of date immigration system. Discover solutions in modernizing immigration to attract and retain world-class talent in the American workforce,” per the program.

Apartment, office, and retail mogul Paul G. Kerr, president of Davlyn Investments, has given $50,000 to Friends of SDSU, the political committee backing a November ballot measure to turn what used to be known as Qualcomm Stadium over to university control.

That $848 he grabbed onto is like $8.48 to most of us. Why is Issa taking money for such trips, when he is so rich? This is horrendous behavior by Issa. I'm surprised he hasn't applied for food stamps!

Because like most Republicans he is greedy and enough is never enough. He feels entitled while attacking entitlements for the rest of us.