“Cassettes have come back really big but I didn’t see it coming." 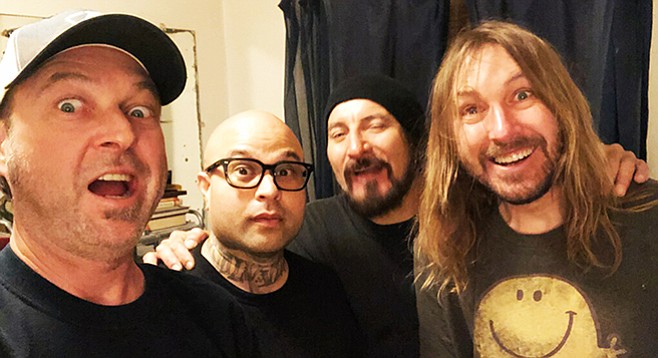 When Jeff Clark was hit by a train in Little Italy last June, the 20 employees at his Thrift Trader stores in PB and North Park immediately lost their jobs. The used records and retro clothing from his PB and North Park stores were put in storage.

“He worked his whole life, then all of a sudden it was just gone,” says Davit Buck, who knew Clark back when he owned some 16 Music Trader used-CD stores (which predated Thrift Trader). “I heard he recently went to see his stuff in storage and he was happy it was still there. I heard the security guard was selling some of his stuff and giving the money to Jeff.”

(A former employee says Clark continues to undergo physical therapy. “He’s learned to walk again. He has his sense of humor back.”)

“Kwame Badu is a rapper who came into the shop,” says Buck. “He never used a record player before. He thought the needle went from the back to the front. Once he figured it out he stayed for hours listening to classic rock. Lots of younger people never used a record player before — some put the needle on the rubber matt thinking it’s the record....

“Cassettes have come back really big but I didn’t see it coming. I sold 300 tapes for 50 cents. Then I saw some of them reselling for, like, $5 on the internet. A lot of cassettes by old punk bands like Agnostic Front, the Misfits, and Minor Threat have really gone up in value.”

Buck gives tours. “One teacher brought in 20 kids for a field trip. They picked up guitars and wanted to hear Beatles records. Kids still want to hear rock.”

But he admits there is a new normal his 15-year-old band, the Homeless Sexuals, must now face: “Most of the clubs in North Park and downtown switched to hip-hop and ’80s dance music. Live rock doesn’t pull in the crowds it used to.

“There used to be [live rock] at True North, Buster Dalys, and Scolari’s Office.

There’s still the Soda Bar and Til Two, but Seven Grand has jazz and U31 has reggae and hip-hop…. It used to be DJs would play before the bands. When we play at Bar Pink, the DJ will follow us. It used to be the other way around. We used to go on at 11. Now the younger crowd who Uber in from the beach or Chula Vista wants to dance. DJs are where the money is.”