No, hepatitis scare did not shut down the Gill-built 100-some-year-old 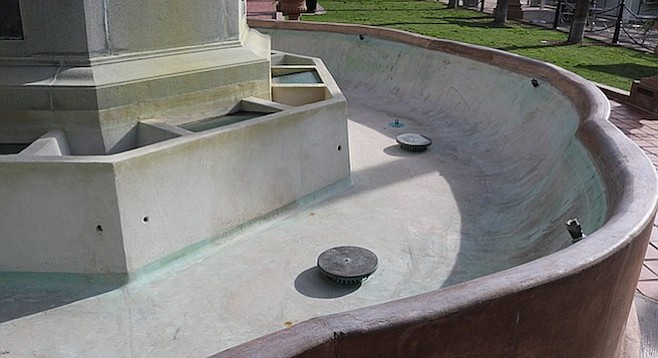 Gregory May was at Horton Plaza last week when he noticed the historic Broadway Fountain was drained. He asked the mayor and councilmember Chris Ward via social media why it wasn't operating and "wasn't this thing just restored?" 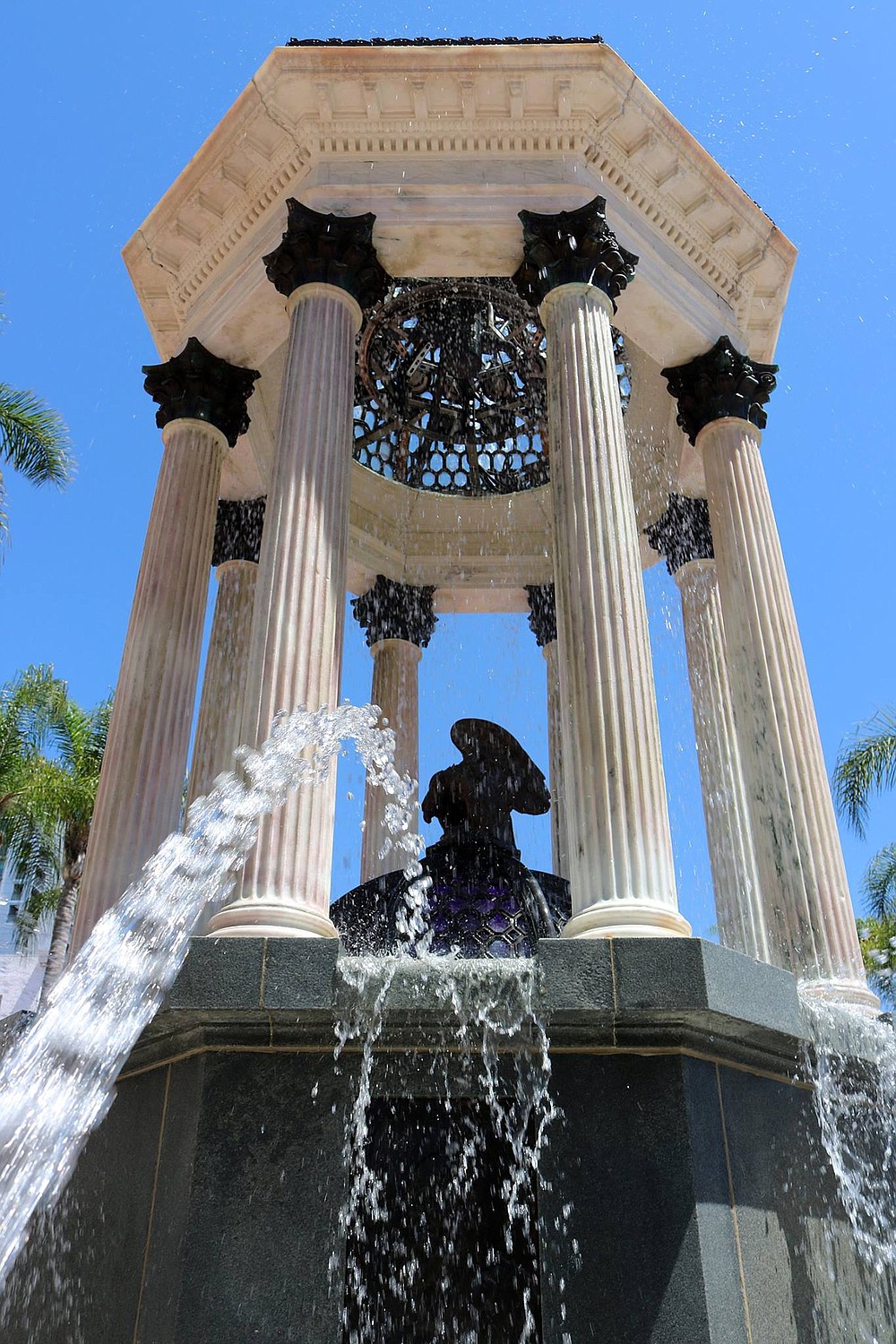 Broadway Fountain after the restoration in 2016

photo by Gregory May

Both Horton Plaza Park and the fountain (next to the shopping mall) reopened in 2016 after years of restoration.

Lucas O'Connor from Ward's office said, "The fountain was vandalized in December and had to be shut off until repairs are complete. Westfield is working with city staff and a vendor that is familiar with the historical restoration and significance of the fountain, and repairs are expected to be complete within the next few weeks."

I asked Tim Graham, a city public information officer, if he knew details of the vandalism and needed repairs. Graham said, "A large rock was thrown into the fountain, breaking a glass panel inside. With the specialized glass that needed repair, the timeline for completion is approximately early February. There may be additional delays as a result of the availability of needed materials, but the contractor is looking for alternative options in an effort to keep to the early February timeline. The fountain will remain off until the damage is repaired."

Speculation on social media as to why the fountain was inoperable went straight to blaming homeless people for bathing in the fountain and the hepatitis outbreak. One person blamed Westfield for letting things go.

The city owns the fountain, not Westfield. Westfield owned the 900,000-square-foot Horton Plaza shopping mall until recently when they sold it, along with their others, to a French real estate company for $15.7 billion. 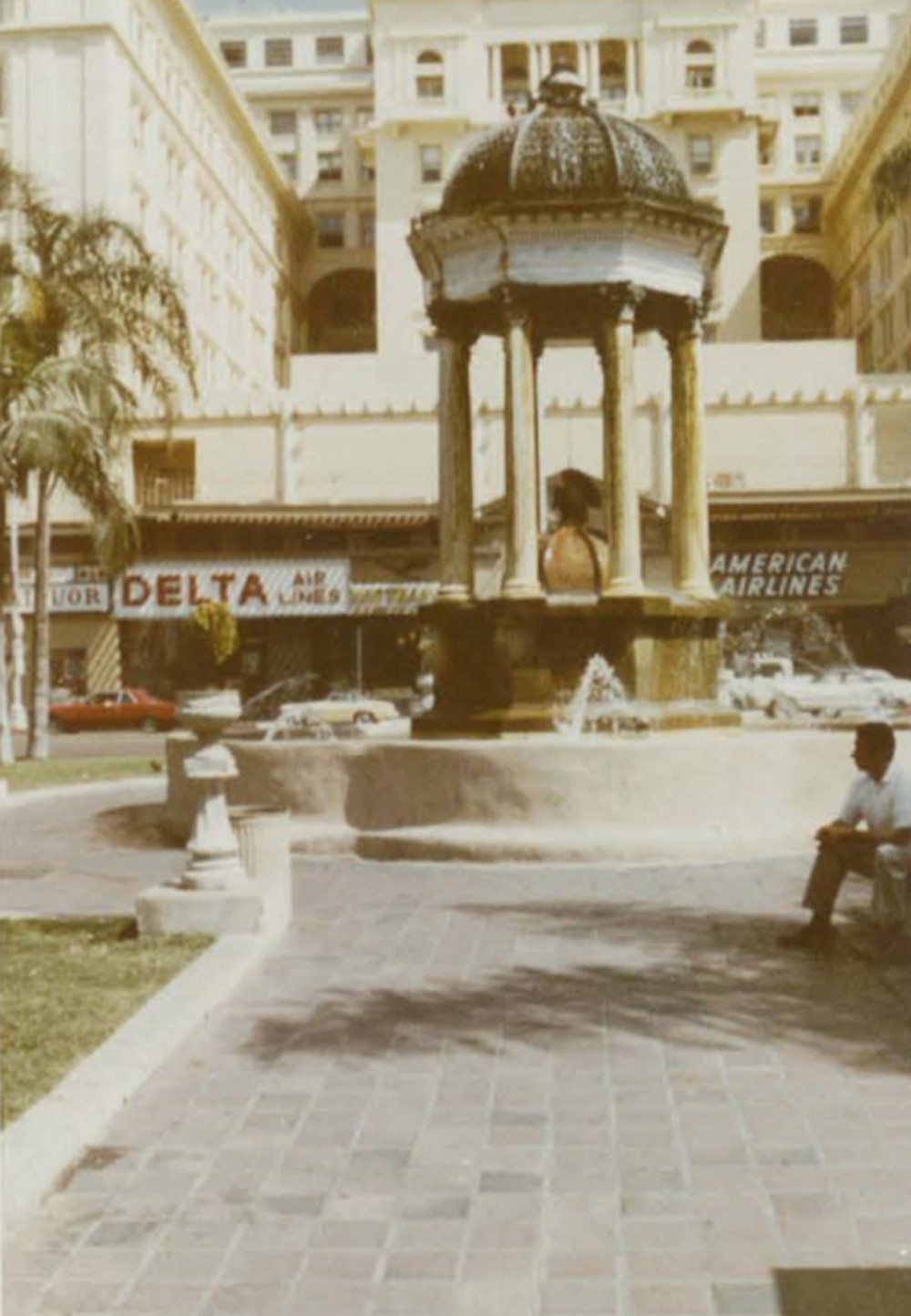 No word on the new owner's plans but locals are hoping history will repeat itself. Back in 1985, the pastel-colored Horton Plaza shopping center reinvigorated the area known mostly for peep shows, flop houses, and X-rated bookstores.

For some, the area has come full circle and is as seedy as ever. The not-so-affectionate nickname for Horton Plaza Park, where the historic fountain calls home, is "Homeless Plaza." According to Save Our Heritage Organisation (Soho), the plaza has had problems with vagrancy since its inception. One old-timer I talked to said the plaza is ground zero for homeless camps in San Diego. "Before you really saw it anywhere else, it was here. They were called bums back then, you know. After the war [WWII], it was mostly vets. You never saw young kids like you do today." 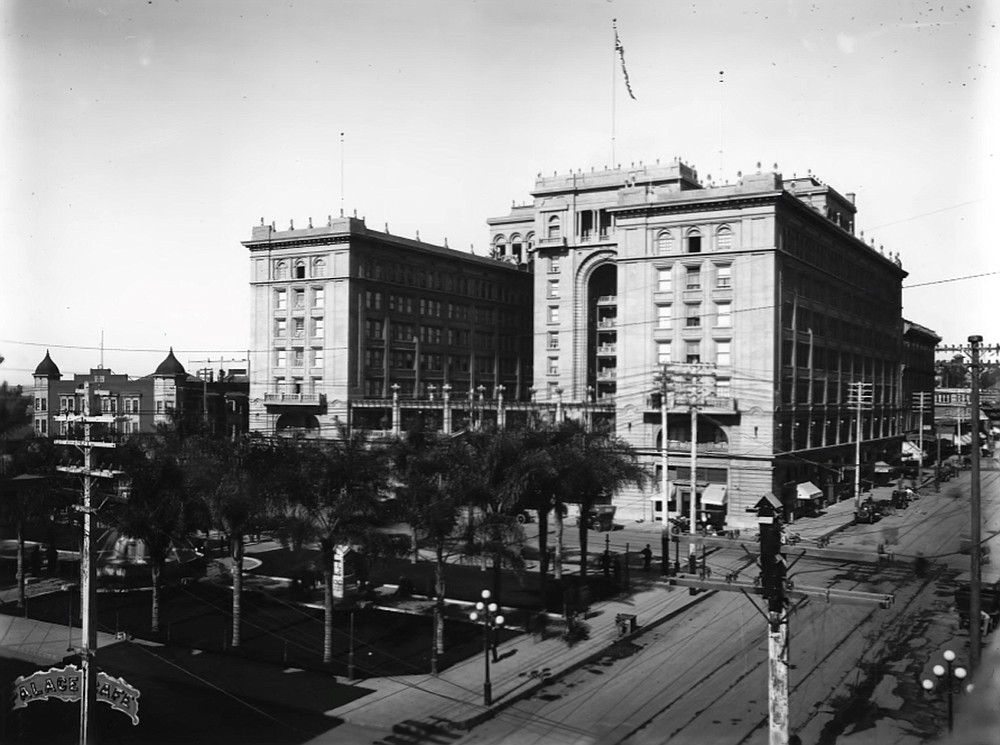 In 1890, Alonzo Horton, founder of downtown San Diego, wrote the city that the plaza should be condemned: "Instead of being an attractive and useful place, it is unsightly, a [receptacle] for dust and filth and a hiding place for vice."

Originally designed by local architect Irving J. Gill more than 100 years ago, the fountain was modeled after the Caragic Monument of Sysicrates in Athens. The fountain sits in one of the most historic sites in downtown San Diego. The "town plaza," as it once was called, has been in use since 1871. This is where locals have gathered to gossip, celebrate, and listen to political speeches for near 150 years.

The fountain, the first to combine flowing water and electricity for its colored lights, was dedicated in October 1910 — on the same day the U.S. Grant Hotel opened its doors, directly across the street. Banker and future mayor Louis Wilde, who had a financial interest in the hotel, paid for the fountain. 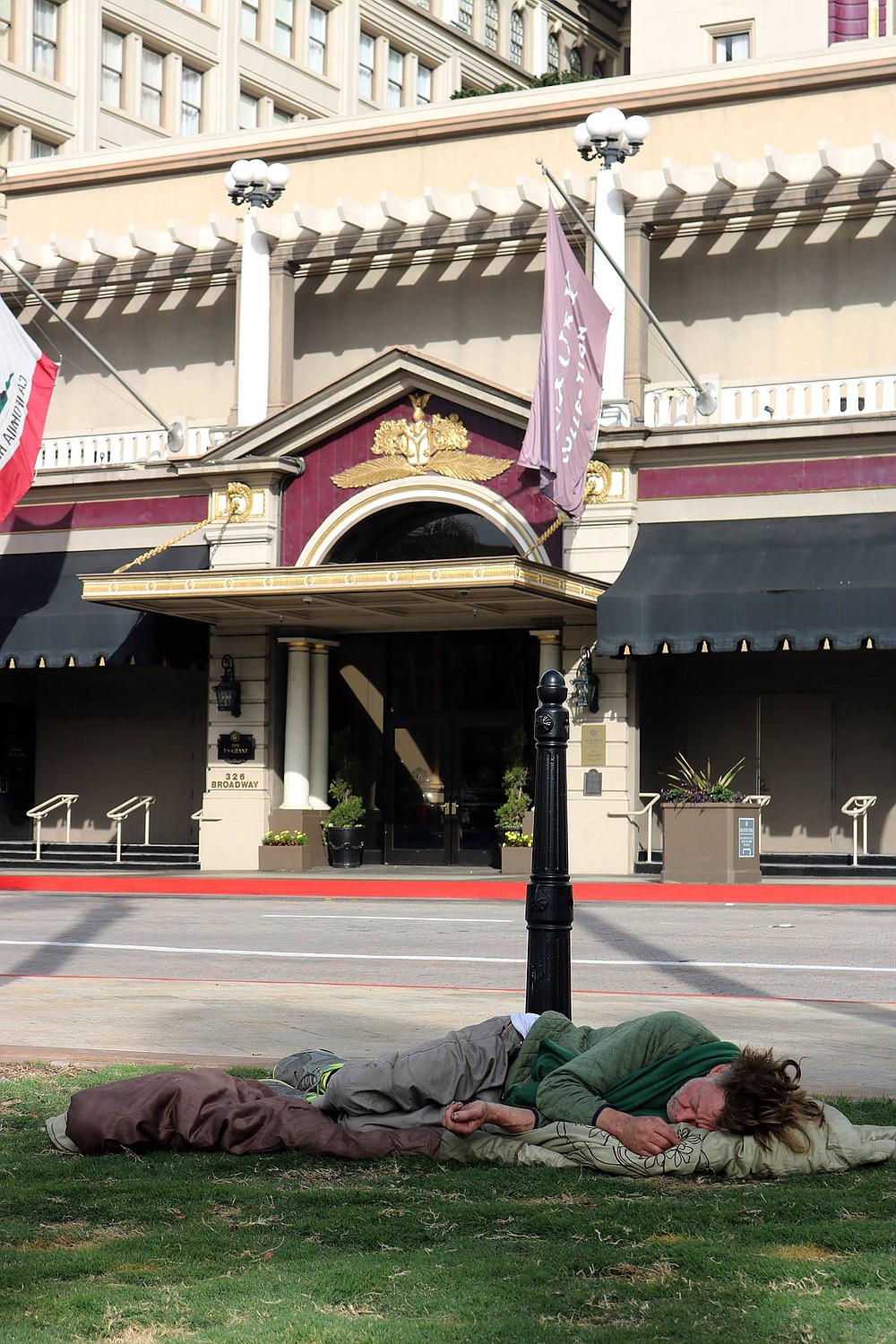 photo by Gregory May

Proposals to build on the plaza started as early as 1887 when it was suggested City Hall should be built there. In 1907, a civic center was proposed. Circa the 1960s, it was suggested the plaza be abandoned and moved to another location. At that time, removal of the fountain was on the table as some suggested it had no historical significance. Public outrage quashed that. To quell any such suggestions in the future, Horton Plaza Park and Broadway Fountain were historically designated locally in 1971.

Though, local historic designation isn't bulletproof. Even though downtown's California Theatre was locally designated in 1990, the city council unanimously approved its demolition in 2017 to make way for a 40-story residential tower.

According to Soho, sometime after the creation of the Centre City Development Corporation (now Civic San Diego) in 1973, Ernest Hahn was contracted to build the Horton Plaza shopping center. It was about this time that city staff nominated Horton Plaza and the fountain for national designation, but were forced to withdraw the nomination "under great pressure."

In 1977, the city council endorsed the national historic nomination of the fountain and plaza along with the Gaslamp Quarter, Grand-Horton Hotel, and the Balboa Theatre. All but the plaza and fountain have been nationally designated. The U.S. Grant Hotel that opened its doors across the street, on the same day the fountain was dedicated, was nationally recognized in 1979.

One wonders if the tourists who go there know that.

I think the idea still lingers in local's minds because Mayor Golding had the reputation for having cleaned up downtown. A lot of hotspots went in and people did feel safe walking around downtown where they hadn't before. In my experience, criminals thrive where homeless populations are high. They hide behind them in plain sight.

In 1955, my dad considered taking a job in San Diego. We came down from central Cali and stayed at the Horton Grand while we visited the zoo and other attractions.

Horton Plaza Park is right across the street, and the grassy space was covered in bums. I'd never seen bums before. 55 years later, I've seen enough. 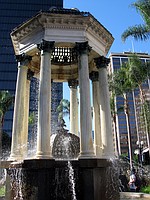 It's a beautiful fountain when running! by dagobarbz

My mom said back on the 1950s, when she was a teenager, the bus let out right there. That's where her and her friends would go shopping. She always saw homeless men there. Right there is where the military picked up their uniforms, that's probably why the peep shows, etc.

"For some, the area has come full circle and is as seedy as ever. "

Classic San Diego Reader article. In the same breath that the writer finishes describing the area as having been a home to "peep shows, flop houses, and X-rated bookstores" the writer says it is as seedy as ever. Please.

There is an expression about seeing things through rose colored glasses, the writers (and most readers) of the Reader I'm convinced see it through piss colored glasses.

Yes there is homelessness and Horton Plaza has clearly been a magnet for it for some time. But maybe instead of empty criticisms, it's time for a solution. Homelessness is not an unsolveable issue, it's only unsolveable when the most people can do is complain. If you aren't an active part of the solution, you don't really have ground to stand on.

I go to the gaslamp here and there and it can be a roudy place but it can also be a relaxing place to enjoy a coffee... so I'm a little confused about the comments from the people who likely spend little time there calling it a cesspit.

Check SD crime statistics/maps, and you'll learn the Gaslamp Quarter is a high crime area, especially at night. It's rowdy then [not "roudy"] for sure. Do you have your coffee time at 10 p.m.? I would guess the answer is no.

That wasn't based on my opinion, that was the gist I got from talking to a lot of people. I sometimes have to paraphrase instead of quoting 20 people individually.

The large homeless population has been there for decades. It was where a lot of locals first saw homeless people congregate openly. Today, there are few neighborhoods that don't have homeless people openly living.

There have likely always been homeless people in San Diego. It's because there are so many in plain sight that there is now a task force. I doubt one size fits all when it comes to a solution. It's going to take a thousand moving pieces to come together. Without those that are homeless being involved in that solution, nothing will likely change in any significant way.

We need to have compassion and we need to pay attention. Criminals use homeless people as a shield. They hide amongst them and mimic homeless behavior to fly under the radar. Not all those bags of recycling are filled with just recycling. Sometimes it's a cover for stolen goods or drug sales. I'm basing this on observations in my own neighborhood.

years ago ( when Northwest Airlines had their office across from the plaza) I went there to collect a free mileage ticket.

their compter was down and they told me to come back in about an hour,

while drinking it sitting on the bench, the police came along and told me to move along.

You meant a Yoo-hoo, right? [not "yohoo"] I remember enjoying those.

sure, sounds the same

As a former magazine editor, I'm a stickler for spelling! :-)

so I have noticed, I come from the old signal corps school, as long as the message is understood.

Well, as first I didn't know what a "yohoo" was, as I had never seen that usage before. I only knew it by its actual name, You-hoo. Just like I remember Grapette, And the original Dr. Pepper (now called Dr Pepper, spelled with no period).

right up there with Nehi and Delaware punch