Chai at the Casbah, Casey Hensley at the Belly Up, Alvvays at the Music Box, and Jack White at Viejas Arena 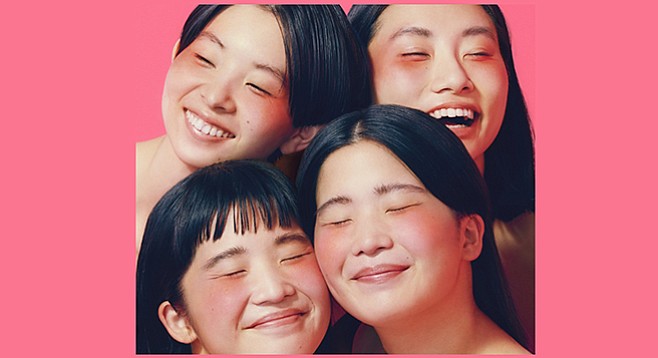 J-Pop fans can thank Tim Mays for finally bringing Chai to the Casbah on March 12, where the four-piece female band from Nagoya City, Japan, will make their San Diego debut. Chai’s memorable single and video for “Gyaran-Boo” is almost surely what brought the ladies to Mays’s attention. Though the foursome was founded in 2012 (before one of them had even learned to play an instrument), it’s only been since their recent Hottaraka-Series EP and related video promos that you could find out anything about the band online that didn’t need to be translated from Japanese. That seems to be because the self-represented quartet actually bypassed Japan entirely, instead launching the EP on international platforms (iTunes, Spotify, Amazon Prime, etc.) and thus actually scored chart positions in the UK and elsewhere. I enjoy the so-serious-it’s-silly look of their music videos (usually featuring them all in matching one-color uniforms), but I wanted to see what their Casbah show might be like, so I watched several concert clips from small rooms like the Amoeba Records store in San Francisco to last summer’s full Rookie A Go-Go set, which has racked up over 100,000 views. Their act is probably best described as Josie & the Pussycats crossed with the Pretenders, as choreographed by an octogenarian marching-band director. Not something you see every day in Midtown. 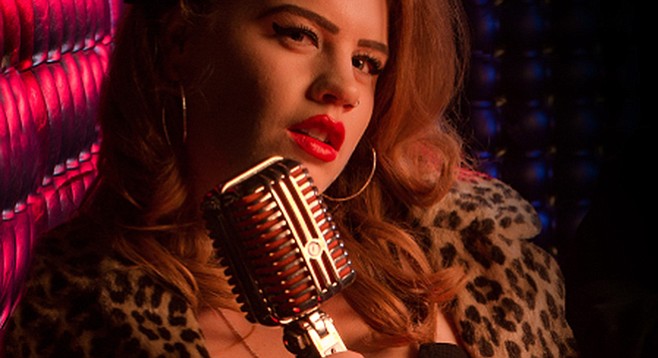 The Six String Society presents local songstress Casey Hensley at the Belly Up on February 14, where the bluesy soul singer will perform a Valentine’s Day concert of lovestruck and lovelorn classics, obscurities, and originals. While still a teen, Hensley fronted Chasing Norman, featuring students from the Vista School of Rock, before striking out on her own with the Casey Hensley Band, alongside her life partner and drummer Evan Caleb, son of the late blues diva Candye Kane. Hensley had a banner year in 2017, headlining the Ojai Blues Festival, appearing at Gator by the Bay, playing the Doheny Blues Fest, as well as touring the Pacific Northwest to Seattle and back. Vizztone Records recently released Casey Hensley Live Featuring Laura Chavez, recorded in one take at Thunderbird Analog Recording Studios in Oceanside with Kane’s ex-husband/Caleb’s dad, Thomas Yearsley. It’s a solid album that demonstrates an impressive set of vocal chops for someone in their mid-20s, as well as breaking out some surprisingly rock-and-roll guitar from time to time, mostly courtesy of Chavez, who also played on Candye Kane’s final studio album. The Valentine’s setlist is likely to include several tracks from Live Featuring Laura, including “I Just Want to Make Love to You” and “Ball and Chain,” with the latter known to run over ten minutes at Hensley’s jam-filled live shows. 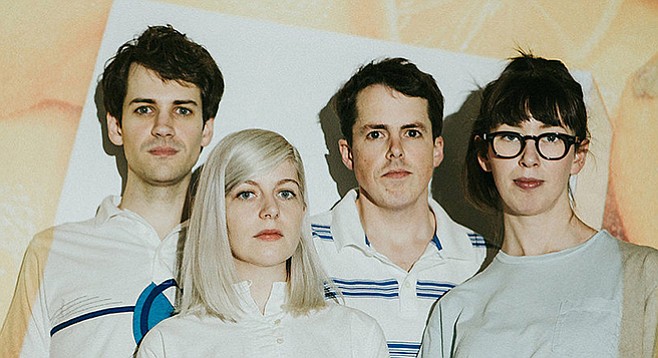 Canadian five-piece Alvvays managed to impress with their first self-recorded demos, getting themselves signed to Polyvinyl Records and hopping onto the musical merry-go-round in hopes of grabbing that same great white northern brass ring that has so enriched Barenaked Ladies and the Tragically Hip. Frontwoman Molly Rankin grew up watching her dad fiddle with the famed Celtic folk group the Rankin Family. After forming Alvvays, a decidedly more rocking (but still as much traditional) ensemble, she booked a South by Southwest showcase that led to their Polyvinyl deal and a self-titled debut album. The first blip they made on the national radar was a single from that record, “Archie, Marry Me,” but their sophomore follow-up full-length from three months back, Antisocialites, seems a much more polished, mature, and cohesive effort, despite the lack (so far) of any standout singles or notable chart activity. You may want to give the up-and-coming jangle-pop band a shot by catching them April 18 at the Music Box, with tix running a mere 18 to 20 bucks. For that, you also get an opening set from rocker girl Frankie Rose, a founding member of Dum Dum Girls with a new solo album to sell you, Cage Tropical. 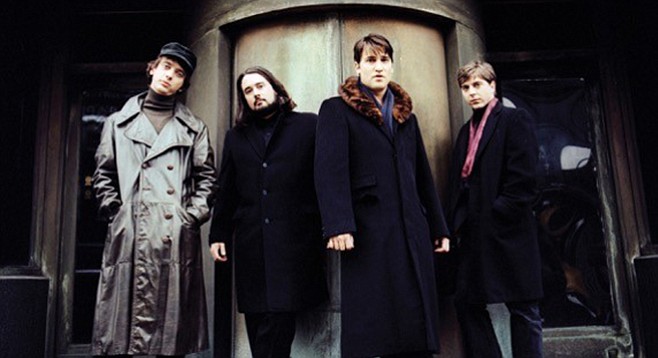 It’s a double-barrel team-up at Observatory North Park on May 9, where Afghan Whigs and Built to Spill will both perform headline sets. Slightly grungy and mighty soulful, the Cincinnati-based Whigs mostly disappeared from 2001 through 2011, but they’ve released two new albums since reuniting, including their eighth studio album from last year, In Spades. If recent setlists are any indication, expect much of that album, as well as covers of songs by the Supremes, Frank Ocean, Prince, the Fugees, and maybe even Pink Floyd’s The Wall, which they’ve been known to play in its entirety. Built to Spill will be leaning heavily on their most recent Warner Brothers release, Untethered Moon, their first album in six years and the first to feature new bassist Jason Albertini and drummer Steve Gere. The bill includes British singer-songwriter Ed Harcourt, who cites among his influences Tom Waits, Jeff Buckley, and Nick Cave. 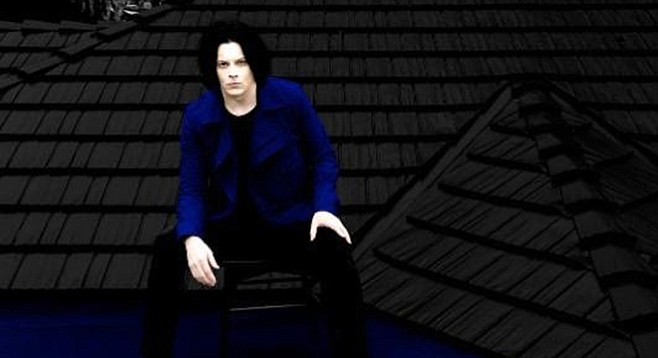 Jack White says he will keep the ticket prices down

Tickets go on sale Friday, January 26, for one half of the White Stripes, Jack White, who’ll play Viejas Arena on August 21, in support of his solo album Boarding House Reach. The record doesn’t come out until March, with only one preview single available, “Connected by Love.” It’s a bluesy organ-heavy number promoted with a noir-ish video that opens with a guy shaving his head before spinning thru scenes of what looks to be a conflicted love affair that he hopes to rekindle, punctuated by shots of White pleading the lyrics and shaking his fists at the walls of a barren hotel room. For this tour, White says he’s trying to keep ticket prices low, with seats going for 59 to 79 bucks, which is mid-range for rock shows at the SDSU campus venue formerly known as Cox Arena. 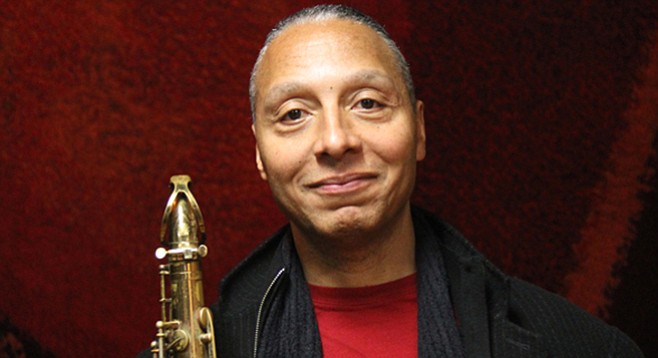 Ralph Moore, part of the newly announced Jazz at the Athenaeum winter series

Also just announced is this year’s Jazz at the Athenaeum winter series, a quartet of concerts at La Jolla’s nonprofit music-and-arts museum that opens February 9 with saxophonist Ralph Moore, who played with The Tonight Show band from 1995 through 2010 and will be accompanied by pianist Eric Reed (Wynton Marsalis Septet) and drummer Willie Jones III. The series continues with the Dave King Trio (February 15), Ben Allison & Think Free (February 22), and Claudia Villela with Kenny Werner (March 2).