That “Chinese Restaurant” episode of Seinfeld...

Everyone has his fix 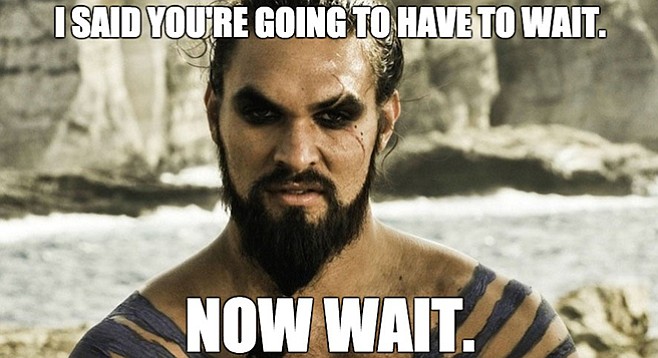 Dear Hipster: I was sitting around the other day with friends, commiserating over the injustice of being forced to wait till 2019 for the next Game of Thrones series, and I realized that a surprising amount of my life revolves around TV shows. I watch them. I discuss them with my friends. I eagerly await their release, and then, if permitted, I binge them so hard my head spins for a few days afterward (which leads to some inevitable regrets over running through an entire show too quickly). I keep hearing about how we are “living in a new Golden Age of Television” because there are all these great shows to watch, and people are organizing their social lives around television shows — sort of how it allegedly was in the ’50s and ’60s with families getting together to watch The Twilight Zone. I wouldn’t know for sure, because I wasn’t there. I think it matters, too, that there is now more great TV than anyone could ever watch, when you take into account Netflix, Hulu, etc. Golden Age or not, TV shows have become super important, so much so that I might venture the majority of Americans rearrange their schedules and/or lives to catch at least one show every week. Maybe that’s a big claim, maybe not. I don’t have the data. I’m just going on a hunch. Being the kind of person who commits himself to maybe half a dozen shows at any given time, my hunches are probably better than most. Anyways, that’s a lot of background information, but it sets up the one thing I want to ask you. Why don’t hipsters hate TV more? It’s the most mainstream thing you can think of, but you never hear about hipsters hating Game of Thrones the same way they hate, I don’t know, Imagine Dragons. — Pat

That’s a damn good question, Pat, although, let’s be fair, everybody hates Imagine Dragons. I think you’re right that TV is the real national pastime, and maybe the answer to your question is as simple as that. Even the saltiest, crustiest curmudgeon of a hipster harbors an abiding love for some otherwise-mainstream TV phenomenon. Whether it’s spinning out elaborate Westworld conspiracy theories, rewatching the “Chinese Restaurant” episode of Seinfeld on Hulu, or pretending that Rick and Morty is an intellectual exercise rather than a series of fantastic jokes, even a hipster has his fix.

That said, there are limits. Me, I’m kind of over it with mainstream TV these days, so I’ve been diving deep into the weird world of YouTube and Vimeo short-film uploads, which divvy up into three basic categories. You have your overzealous fan films, your film-school art pieces, and your film-fest genre bits.

Now, I’ll level with you: it’s 80 percent crap and 19 percent almost-but-not-quite getting it right. But there are some gems out there, although the best part is in the discovery. If obscure Netflix discovery is the TV equivalent of finding a 20-dollar bill in your pocket, then hitting it big with an obscure, foreign YouTube short film is like finding a box in the attic filled with your great-great-great-grandfather’s stolen pirate treasure. I just stumbled onto a two-year-old Star Wars fan film about the apprenticeship of Darth Maul, and I’m pretty sure it’s twice the movie that The Phantom Menace was.