Worst wipe-out was in Peru 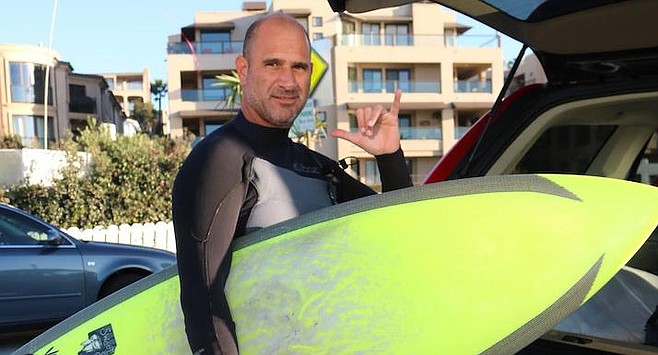 I saw Benjamin by his vehicle at Hospitals in La Jolla. It was one of the last days of 2017 and it was 74 degrees out.

He said that the 3-4 foot waves “esta increíble” (are incredible) this day and “the reef makes the waves break more prefect.”

In 2003, Benjamin moved from Peru to San Diego. He’s been surfing at this spot ever since and considers himself a local.

“Usually it is [territorial] here at Hospitals,” he said, “if people are respectful and don’t get into your waves and paddle around you — that's fine.”

Benjamin is a 46-year-old real estate agent who gets to surf at his favorite spots, Hospitals and Hosreshoe, whenever he wants, because of the flexibility of his job.

“I like to hit the lip of the wave,” he said, “and I’ve caught some barrels here once in awhile.” This day he brought out his 5’10” Rusty which he said was perfect for “son buenasas” (the good) waves.

He’s been surfing for 34 years and his craziest wipeout happened back home in Peru when he caught a 12-footer “but I couldn’t stand up and I fell and there was a lot of rocks.

"I was down there for a lot of time.”