Thailand and back again

Individual and collective consciousness in Bangkok and Chiang Mai. 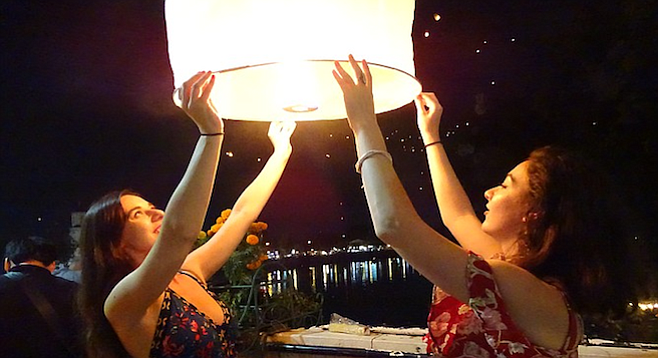 Squeezing into the oyster can of LAX and 19 hours of flying coach later, Bangkok hits me like a freight train: Heavy air and loud noise bounce off paved streets and temporarily blind a few senses. The sounds of cars merging, conversations in different languages, and old diesel boats coughing out black smoke all blend together in a single low-toned hum. A thousand vendors sell flowers, cuts of palm, and fried foods, dried food, and smoked skewers. My footsteps go unheard as I float through a crowded marketplace.

Looking for solace, I follow the canal and my path leans right towards the temple of Wat Pho. 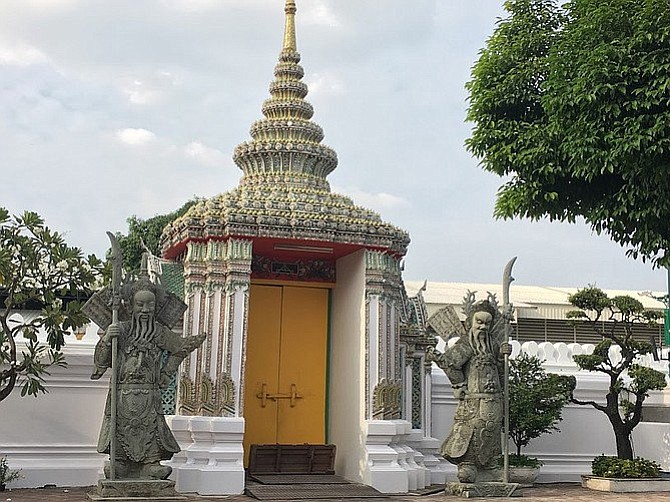 Curved halberds in hand, large gates and ten-foot tall stone guardians both welcome and ward away spirits from the entrances. My girlfriend and I walk towards the smell of incense burning idly by a statue of monk, gold flaking off his face as living flesh. Before him people light candles, place a gold flake on the holy relic, and remove their shoes before paying homage with a practiced bow.

I continue through the temple. Rich with gold and pointed architecture, every corner is intricately carved and adorned with artwork. Windows are painted with colorful pictures from past lives. A calm spirit fills Wat Pho, this place of worship. The monks bless each encounter with palms pressed together.

After hours of a peaceful visit, stepping back into the city was a louder than expected, and we walked a bit aimlessly before wandering into a pseudo-mall for an early dinner. The stores were brightly lit, but maintained the appearance of slightly upgraded street vendors.

By the time the veil of night fell and various party-goers began poking their heads out in search of all sorts of entertainment, we'd had our fill and were ready to rest before tomorrow’s adventure in Chiang Mai.

The next morning we're visiting my girlfriend’s sister Ally, where she resides at a Chiang Mai Elementary School as a well-liked art teacher.

There is an affixed smile on her face as she tells us about her neighborhood and we hit the town for lunch. Within minutes of walking, a little girl spots her, “Teacher Ally, Teacher Ally. So happy to see you.” Ally leans down and waves to her, the two parents glowing. We are introduced briefly and part ways with two hands together and a bow.

The heart of the town is made up of small meandering streets, with larger ones along the base of high mountain ranges. Our visit to Chiang Mai took place around Loy Krathong, which translates to "float a basket." The festival is used to thank the goddess of the water for giving life to the forests and fields, and ask forgiveness for human pollution. A river runs underneath stone bridges, which serve as a destination for this festival of lights. At the shoreline, there are tables with ornamental flower boats that are meant to be sent down river. One women in particular has lovely floral arrangements — a cut of palm tightly matted in banana leaves, with marigolds, incense and a candlestick. At a good price of 40 baht, we each buy one.

While holding our flowers Ally tells us, “You’re supposed to light the candle, make a wish, and float it down river. If it doesn’t sink, your wish will come true.” The full moon rises and at dusk, we light the incense and candles in our boats to push them down river with a blessing. Hundreds of others do the same from all walks of life. The boats don’t sink.

We leave the riverbank to head into a more popular part of town. Apparently the one steel bridge of Chiang Mai is where the hip kids go to take their selfies under colored lights and large steel beams. I prefer the older architecture, personally, and dodge the picture moment.

I stop to grab a drink from Bus Bar, a straight-up 70’s style red VW Bus converted into a minibar, and a big red bus for the stage where a band plays recognizable covers like "Stand By Me" from Ben E. King and "Get Back" by the Beatles. Easy to pass some time with a large Chang beer for 60 baht (just under 2 dollars).

Night grows darker, and the town grows brighter; faces are lit by flaming wax coils underneath tall white balloons, slowly rising as they inflate with hot air and are sent into the sky. 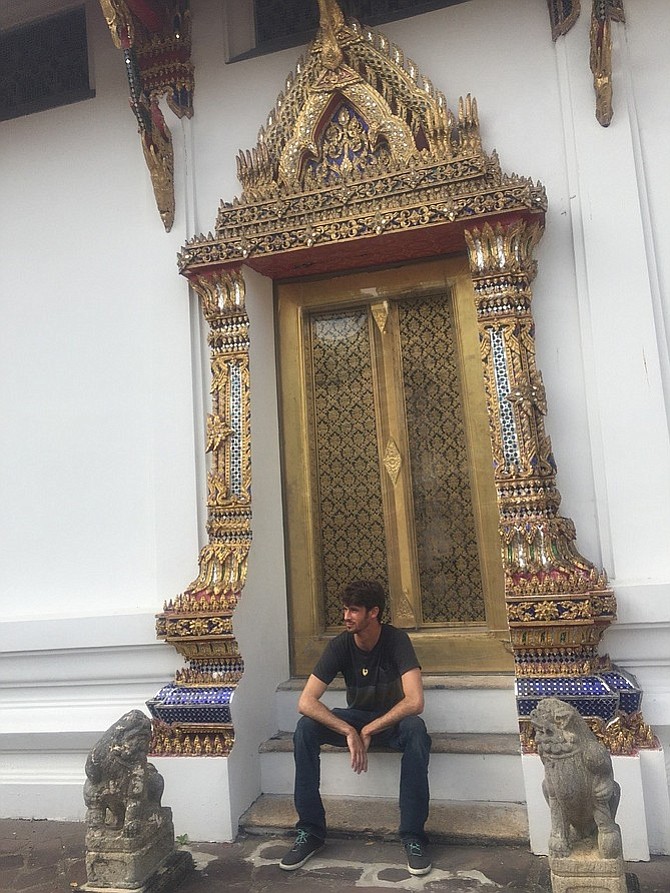 Author on a temple stoop.

In Chiang Mai I find myself beginning to understand a simple yet fundamentally different mentality. I walk in a crowded market street, filled with not only local Thai but travelers from 50 different nations. I begin to feel less like a unique individual and give in to a sort of collective consciousness. Back in San Diego, the status quo mentality seems bent on advancing one's career, constantly measuring success based on one's personal goals. Here, I see less of a wanting to be above others to feel worthy of praise.

Perhaps the key to global progress will be a blend of individualism, knowing each person is capable of greatness, and collective consciousness, where each man, woman, and child strives to bring others with them in this ambition.

Here in Thailand, our journey continued and new memories were made.

Interesting, But swarms of people, a "thousand vendors" and a continuous cacophony do not appeal to me at all. I'd much rather go to Yellowstone. And collective consciousness exists everywhere--even in San Diego--not just in Thailand.

Agreed that these thoughts can emerge from an eye opening travel through Yellowstone as well. I am more the nature enthusiasts compared to a metropolitan one. This trip was one that put me out of my comfort zone at times. The perspective was driven more by the fact that entire regions of people were viewing the world from a seemingly less capitalistic standpoint. Luckily we spent time in the mountains of Pai where I was able to get back to my Sierra style hiking and relaxing.