The KKK peaked in San Diego in the 1920s

But it was stronger in L.A. 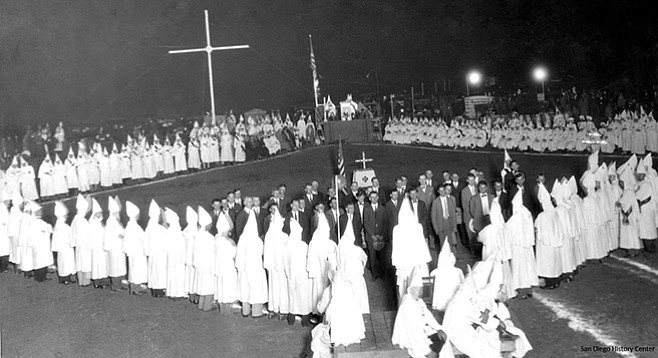 The Ku Klux Klan got rolling in the American South after the Civil War. Its aim was to thwart Republicans placing freed slaves in state legislatures and high government positions. The Klansmen of that period lynched black people, killed the blacks’ white supporters, and caused so much havoc that the Klan eventually was named a terrorist organization as militias pursued its members. That first period of the Klan was almost snuffed out. 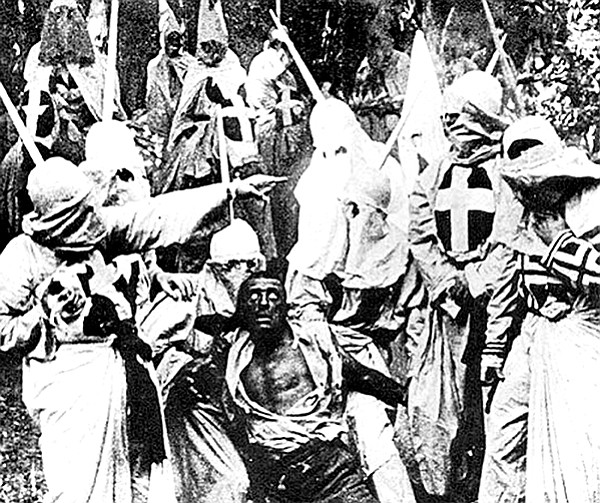 Hooded Klansmen catch Gus, portrayed in blackface by actor Walter Long in The Birth of a Nation.

Then, beginning in 1915, the Klan rose again, partly because of the popularity of a movie, The Birth of a Nation, which glorified the original Klan. (It is always reported that President Woodrow Wilson liked the film, but that was not true; he went out of his way to denounce it, although it was reportedly shown in the White House.)

Conservatively estimated, there were more than a thousand Klan members in San Diego in the 1920s. The group flourished, but not as intensively as in Los Angeles, where a mayor, police chief, and sheriff were Klansmen. It was in the 1920s when the unique costume came on the scene: floor-length white robe and a white pointed hood with eyeholes. Burning crosses also came in that second Klan period.

The San Diego Klansmen (and Klanswomen) of the 1920s were, generally, anti-Mexican, anti-immigration, anti-Chinese, anti-Catholic, anti-Semitic, anti-union, and anti-Communist. There were, however, some things that the San Diego Klan was for: Prohibition, rigid Protestantism, and white supremacy. Klansmen despised the loose morals of the Roaring ’20s, particularly the illegal imbibition in speakeasies. 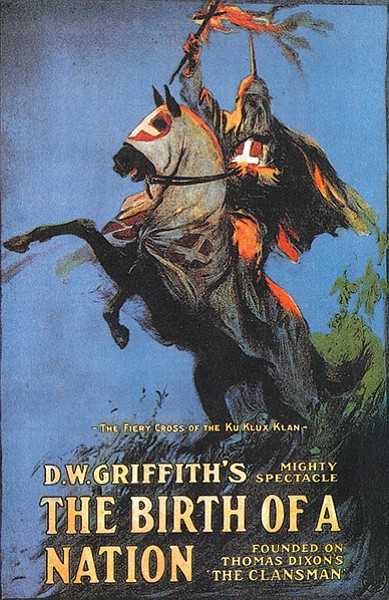 Birth of a Nation theatrical posters from 1915...

Klan members, whose headquarters was a large hall west of 30th Street near Idaho Street in North Park, considered themselves morally superior. Indeed, an ad for the Klan Youth Corps, featuring a lad as clean-cut as a present-day Boy Scout, said the organization was for “white heritage, white pride, white unity, white power.” Said the ad, “If you are a White student between the ages of 12 and 17, and idealistically oriented toward the struggle for the survival of White Christian civilization, and values, then the Knights of the Ku Klux Klan invite you to become a part of the Klan Youth Corps.” 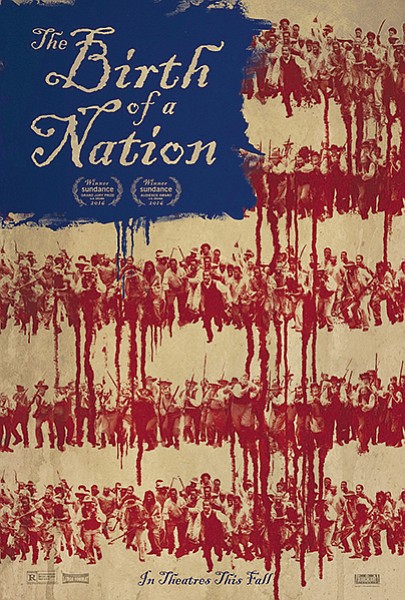 In the year 2000, scholars Carlos M. Larralde and Richard Griswold del Castillo (neither of whom I could reach) wrote a paper for the organization now known as the San Diego History Center. The name: San Diego’s Ku Klux Klan 1920–1980. The authors said, “In San Diego, the Ku Klux Klan particularly targeted Mexicans,” although it also aimed invective at new immigrants from Europe, Jews, and African-Americans. The monograph quoted a Mexican maid, who said, “Any Mexican worker who challenged authority or appeared suspicious of one thing or another would forfeit his life.” She told of seeing Mexican laborers being dragged and lynched or whipped and burned. Larralde and Griswold del Castillo stated, “Newspapers refused to investigate cases of Klan hatred because editors feared that negative publicity might create a bad image for San Diego and hurt its commercial growth.”

Colleen O’Connor, retired professor of history and sister of former mayor Maureen O’Connor, says the San Diego Klan of the 1920s “was [as] thuggish and brutal as in other cities.” O’Connor, who got her PhD in U.S. history at the University of California San Diego, says, “The KKK in San Diego, as elsewhere, was primarily a secret organization of white supremacists — bound by hate, prejudice, fear, and violence…above the law or often part of the law…who cloaked themselves not just in white hooded sheets but in a polluted form of patriotism that was an attempt to mask the base nature of their cruelty.”

San Diego’s Klan of the 1920s was strongly anti-union. The often violent mentality of the local battle that in 1912 pitted the business establishment, clergy, media, and others against the Industrial Workers of the World (called Wobblies) may have carried over to the Klan of the 1920s, suggests O’Connor. “The anti-union sentiment that still exists here probably did have its roots in the Wobblies era. And the white supremacist nature of the Klan still exists in U.S. politics today,” says O’Connor.

The major paradox is that for all its violence and hatred, the 1920s Klan was considered moderately reputable, particularly in the South and parts of the Midwest. In relative population, Indiana was the biggest Klan state. Nationwide, the Klan’s population reached 4 million in the mid-1920s. It was politically powerful. Its massive marches in big cities chilled politicians, executives, and scholars who might speak out against it.

In the 1920s, “San Diego had been a Southern town for a long time,” and that was even more true of Los Angeles, says Steve Erie, professor emeritus at the University of California San Diego, where he taught both political science and history. “A lot of Southern sympathizers after the Civil War settled in Los Angeles,” and that spread to San Diego and other parts of Southern California, but that doesn’t mean the Southern influence by the 1920s was a major power in the local Klan. Like O’Connor, Erie believes that “there was some carryover from the 1912” anti-union violence that sunk into the 1920s San Diego Klan.

We have to look at the times, says Erie. Nationwide, there was a “linkage of immigration with radicalism.” This was a time of syndicalism, a revolutionary doctrine by which workers would seize control of the economy and government, says Erie. “It was the first Red Scare.” Bolshevism and trade unionism were linked in many minds. The Palmer Raids against suspected leftists were carried out by the Department of Justice. The Sacco-Vanzetti trial wrongly convicted two immigrant radicals. “The KKK had their own radio stations — they were the ultimate purveyors of fake news.”

O’Connor points out that some of the so-called respectable people who belonged to the Klan in San Diego were doing so to get or retain a job from the boss, a Klansman.

Since that 1920s period, some people seem to have forgotten the Klan’s brutality. In 1978, the organization now known as the San Diego History Center interviewed V. Wayne Kenaston Jr., whose father was Kleagle (recruiter) of the San Diego Klavern of the Klan in the early 1930s. The family was Protestant, and his father belonged to the Masons as well as the Klan. His mother made him a child’s Klan outfit. In the interview, Kenaston stated that members of the Klan that he knew were not necessarily anti-Catholic. They were opposed to the Catholic hierarchy. Similarly, Klan members from that period weren’t really anti-Mexican. “The Klan was chasing the wet-backs across the border,” he said.

Then as now, "some very fine people."

The tendency to sanitize the past leads some to believe one can cherry-pick stories or ideas ("The KKK protected widows and children"; "Hitler did some good things but went too far"), without understanding that everything done in the service of evil is tainted and irredeemable.

Pseudohistory is just as dangerous as pseudoscience.

Cassander: Yours is a perceptive remark. The Klan in the 1920s really wanted society to go back to a time run by an all-white majority. If it took murder to help accomplish that, so be it. I looked at San Diego Klan material from the mid-1920s: they really did want a nation run completely by whites, although in some instances they would put up with cheap labor provided by blacks and Latinos. Best, Don Bauder

So what has changed? Republicans want the government to be run by the white elite and want cheap labor.

We would like to forget, but shouldn't, Tom Metzger, who won thousands of votes locally in the 1980's.

Psycholizard. Metzger should not be forgotten, although he was around in the 1980s and beyond. However, I am not sure he got even 20 percent of the vote in the main election. Incidentally, my column mentions that Indiana was the major Klan state. Metzger came from Indiana. Best, Don Bauder

I met Metzger in the early 80's. He was pleasant and well spoken. To his followers he sounded knowledgeable and reasonable. Metzger was, as I recall, had a small electronics repair shop. He attracted disaffected whites and a lot of biker types. At gatherings no one ever spoke in opposition to anything Metzger said. He and Trump are very much alike.

I can't stand the thought of race hate. Any relatives of mine, they know who they were/are (or neighbors) can go to Hell for eternity as they asked for. Thank Mafioso racist Trump and his overtly skewed supporters for renewing pop sickness. Oprah-Hanks in 2020. Together, We shall overcome at the mountaintop with MLK.

shirleyberan: Maybe the racists you know will indeed go to hell. I must warn you, however, that this statement is coming from a religious skeptic (me) who believes in neither heaven nor hell, nor a god who provides divine intervention. Best, Don Bauder

Louis Farrakhan used to show up on my TV (when I had one) at odd times while channel switching. What a captivating character! His dynamic style of speech, his thoughtful presentation and impressive persona just blew me away. He would always be surrounded by security personnel and a huge audience of enthusiastic worshipers.

So yes, he is a black racist and he makes no excuses for it. But interestingly he has no complaints about the KKK. He feels that it is their right to stand up for white folk and protect their interests. He agrees that segregation is good. He understands their aggressive behavior. They are brothers in Hate!

swell: I have never seen or heard Farrakhan, but he sounds like a publicity hound to me. Best, Don Bauder

Farrakhan is also a concert violinist. Not a great one, but devoted. It's easy to label people but most have several dimensions that get missed in the process.

swell: I would like to hear Farrakhan doing the Franck violin sonata. Best, Don Bauder

swell - the correct response to evil treatment is not thank-you it's F you. I read the autobiography of MalcolmX in the 70's. Too bad he learned late we're all shades of [imperfect] human.

shirleyberan: The fact that nobody is perfect should be learned at about age 4. Best, Don Bauder

Now that I think of it, was it not Farrakhan Muslims who conspired and assassinated MLK?

shirleyberan: I have never read that. Best, Don Bauder

No, the dis-honorable Elijah Muhammad of a New York muslim 'brotherhood' had Malcolm shot at his speech on Feb 21,1965 in New York. MLK was shot April 4, 1968 by an insane idiot.

shirleyberan: I have never been satisfied with the report on MLK's murder. Best, Don Bauder

Dan Mack: Yes, North Park was where the Klan had its headquarters in the 1920s. But despite their hatreds, the Klan members believed they were pious. Best, Don Bauder