Brazilian imports by the Salton Sea

"I got stuck inside the Taco Tuesday lifestyle.” 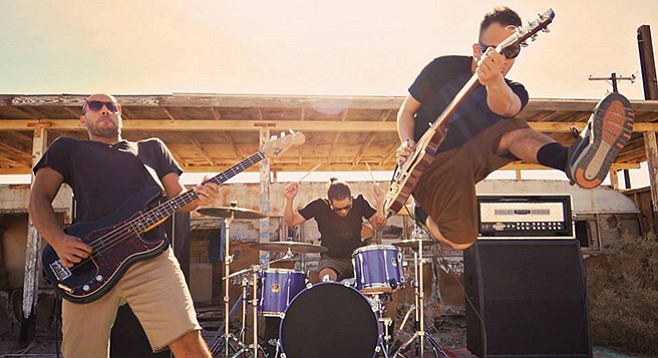 “We’re three foreigners playing punk-rock music in America,” says Fernando Nepo of O.B. trio Sameland, who all grew up in São Paulo, Brazil. “Back in 2010, I had just finished college and I wanted to move on with life, do something different. One of my best friends was living in San Diego at that time, and she invited me to come. I came intending to stay for two years and got stuck inside the Taco Tuesday lifestyle.” 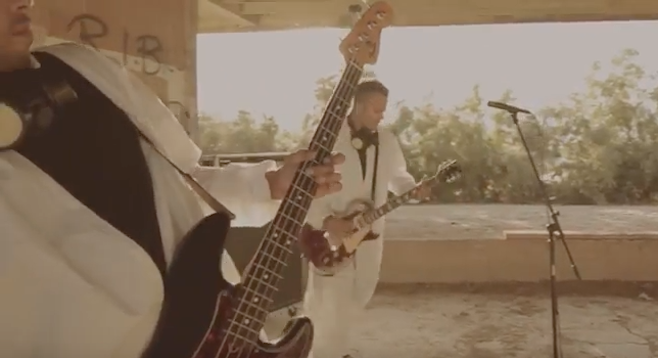 Nepo was soon joined by fellow São Paulo musicians Diogo Figueiredo and Rafa Scatolin. “We were familiar with San Diego bands like Stone Temple Pilots, I’m a huge fan, [and] P.O.D., Unwritten Law, Blink-182, and Santana, but our biggest influences were bands from the South Bay L.A. punk-rock circuit.” Dropping this week, their debut full-length, Set in Motion, was mixed and mastered by Gab Scatolin at Mug Studio in São Paulo. He also produced Rafa Scatolin's other band, No Kings.

“Our music brings back a lot of the old-school melodic punk-rock spirit mixed with new influences and genres that aren’t usually combined in this kind of music. It also addresses a lot of issues and points of view from the perspective of someone who’s not from here, but yet feels like this place is home.”

A video for the first single, “No Escape,” features the band rocking out in the desert amid dilapidated buildings covered in graffiti, with members seen in gas masks while someone in a ski mask prowls around the scrub brush and abandoned cars.

“We shot at the Salton Sea beach.... The deterioration status of the place was the perfect fit for our purpose, since ‘No Escape’ talks about the need of voicing out our opinions, issues, and concerns before it’s too late.”

“We found this abandoned mini-sized RV, all torn up and full of cobwebs. We promptly decided to take some pictures and shoot video inside it, when someone suggested that we should write the band’s name backwards on the dusty windshield, so that we could take a picture from inside. I think that was the coolest idea, because the ‘Sameland’ blowing out of the windshield, with that epic sunlight, makes it look like the vehicle is actually headed to the Sameland.”

That's the only thing the stinky Salton Sea is good for: photo, movie and video shoots.