San Diego Hamilton worshipers get theirs 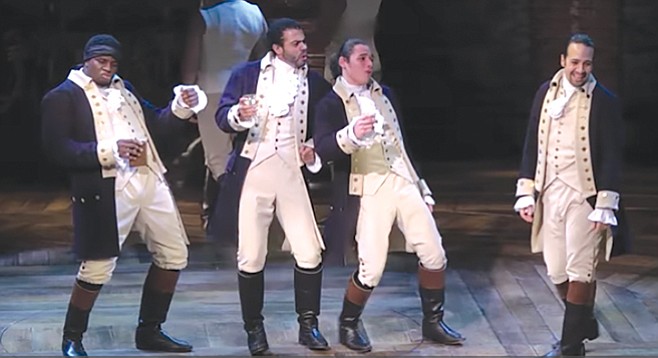 Hamilton, the Musical is coming! Hamilton is almost here! Beginning January 9, and ending January 28, the most decorated Broadway show in eons will run at the San Diego Civic Theatre.

Lin-Manuel Miranda, genius, based his musical on the life of Alexander Hamilton. A bastard child (“son of a whore and a Scotsman”) and an orphan, he grew up in poverty on St. Croix in the West Indies. Through fierce dedication, he rose from a lowly clerk to a prolific writer, one of the founders of the U.S., and the face on a ten-dollar bill. 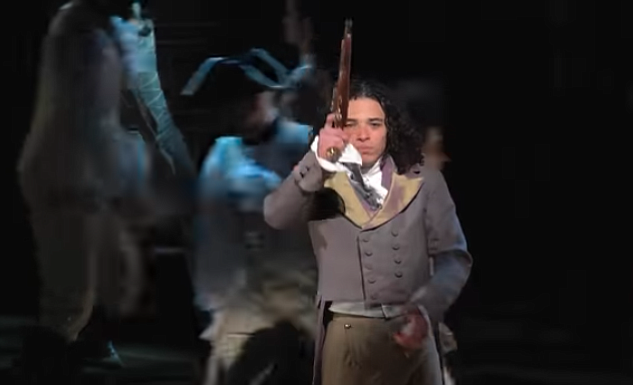 Hamilton will have several preview nights before it opens.

He had a hair-trigger ego. Theodore Roosevelt called him “the most brilliant American statesman who ever lived, possessing the loftiest and keenest intellect of his time.” Woodrow Wilson called him “a very great man, but not a great American.” 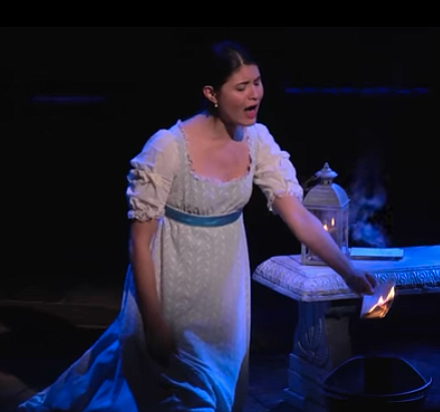 Hamilton has no dialogue; it is sung throughout.

Instead of Anglo actors playing Washington, Jefferson, and the others with stern solemnity, Miranda chose a multi-racial cast which sings the story with rap, hip-hop, and jazz. The result’s a maelstrom of ticket sales with no end in sight.

Those who haven’t made a pilgrimage to the Great White Way will finally see/hear what the shouting’s been about.

And they really shout. Theater-savvy friends tremble and beam as they struggle to describe the experience. Then explode: “Greatest show I’ve ever seen — ever!” “You won’t just love it, you’ll worship it!” 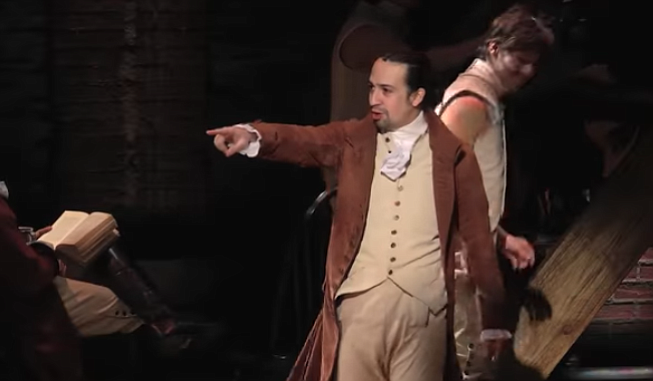 Those who say “awesome” don’t count, since almost everything on the planet’s worn that label. (“How’s that languid lentil soup?” “Awesome, dude.”)

Tickets for “premium” seats on Broadway now cost $849. Regular seating runs from $179 to $279. Could it be the Chosen praise it so highly to justify the expense of traveling to New York, food and lodging, and beacoup bucksheesh for tickets? Convince themselves the trek was worth it?

Don’t think so. People who have seen thousands of shows, done live theater, breathe theater, say Hamilton is the zenith of them all.

But this is a “touring show,” a replica, not the original. All elements must be mobile, like a circus. So the set will approximate Broadway’s. Lighting may be a mix of traveling and local elements. The music done with traveling orchestra or a collection of locals? And, most important, the sound. Hamilton is sung-through, with little or no dialogue, and Miranda’s lyrics have been praised beyond measure. They must be clear.

A touring show sets up predictable reactions. The Chosen who saw the original can say “much better in New York; you’re just chugging from a plastic cup.”

The hyper-hype brings pressure from the other side as well, even a built-in bias: “Oh sure, it fooled them, but I’m made of sterner stuff, by jiminy!” And, of course the Perpetual Nay-sayers, who’d look for fissures in the Holy Grail, will detect egregious errors.

A Tony Award–winning actor once told me, though he certainly appreciates glowing reviews, he doesn’t want them. They bring added pressure to his performance.

One aspect in its favor, Hamilton will have several preview nights before it opens. Get kinks out. Adjust to the new space. This is rare. Also, the musical’s no slam-bam and out the door — hit town for six days and scoot. It will be at the Civic Theatre for three weeks.

With so many ecstatic reviews, the production must first break down these barriers before it can work its alleged magic. So, a first-ballot Hall of Fame musical or something for the lesser arcana? Who knows. But it’s exciting to see what the shouting’s been about, if only a glimpse.