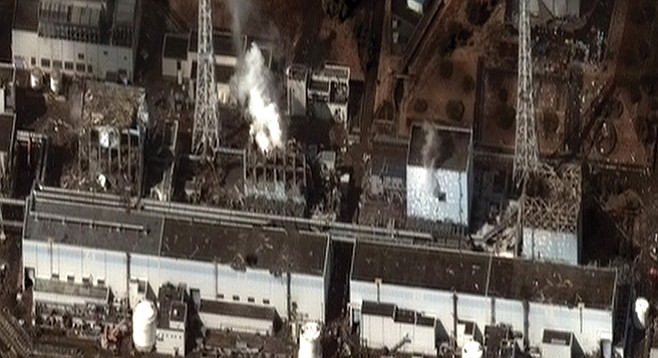 Are northern San Diego County and southern Orange County headed for another Fukushima Daiichi–like nuclear disaster? Possibly, but not necessarily in our lifetimes. The economic severity of such a disaster could destroy the California economy, flatten the United States economy, and severely harm the world economy while killing and maiming many people, says Carlsbad scientist Tom English. 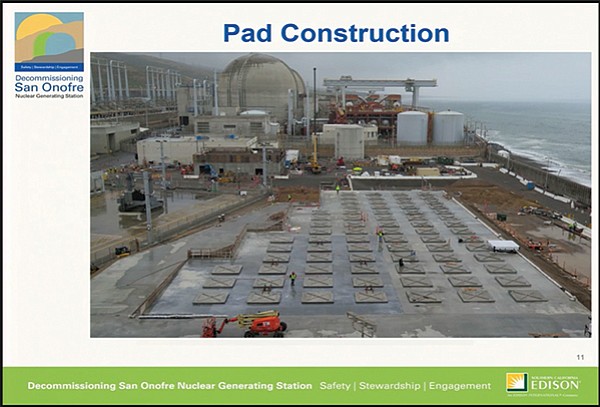 English got a PhD in electrical engineering at Carnegie Mellon and did postdoctoral work in environmental engineering at Vanderbilt. He has lectured at more than 100 universities and given eight presentations at the White House. Now he is giving lectures about the greed and stupidity behind the decision to bury nuclear waste 108 feet from the ocean at the shuttered San Onofre nuclear plant.

Why is Japan’s Fukushima disaster of 2011 a possible model for what could happen in Southern California? Japan’s Fukushima Nuclear Accident Independent Investigation Commission concluded that people should not blame the tsunami for the disaster. Fukushima “cannot be regarded as a natural disaster,” said the panel’s chairman. “It was a profoundly man-made disaster…governments, regulatory authorities and Tokyo Electric Power lacked a sense of responsibility to protect people’s lives.”

The radioactive material would be 108 feet from the ocean, but rising oceans will put it under water eventually.

Edison’s scheme to pawn the cost of the decommissioning onto ratepayers and to bury 3.6 million pounds of nuclear waste next to the ocean displays the same greed and incompetence as Tokyo Electric and its regulators. As Californians have learned, Edison’s corporate duplicity knows no bounds. The California Public Utilities Commission is a classic case of “regulatory capture,” or regulators run by the utilities. The federal Nuclear Regulatory Commission also bows to utilities, and the California Coastal Commission thinks spent nuclear fuel should be stored where it originated (in our case, at San Onofre) because the federal government hasn’t developed any options for either temporary or permanent storage of this extremely deadly waste, says English.

On nuclear issues, the coastal commission believes that its mandate to include environmental, health, and safety issues has been preempted by federal law, says English. Therefore, the commission has made a point of deliberately excluding these crucial considerations from their licensing hearings, even though they are well aware of their critical importance. That is a fatal weakness in the commission’s nuclear permitting process.

The regulators practice the malodorous “revolving door” policy — employees stay awhile at the regulator and then go work at a utility at a high salary. This is practiced at other so-called regulators such as the Securities and Exchange Commission. In effect, regulators are temps until they can get that fat job at a company.

Fukushima showed that storage of the dangerous spent fuel in pools of water has dangers, so now utilities put the spent fuel into dry storage, slipped into canisters that are surrounded by concrete. “You create a problem worse than the problem you were trying to solve,” says English. To bury the canisters 108 feet from the ocean is “absolutely stupid.” Canisters should be “as far away from water as possible.” Reason: global warming is melting the earth’s polar ice caps, causing massive sea-level rise. According to James Hansen, one of the world’s leading climate-change experts, by the year 2050 the sea level could rise by ten feet. If this happens, the canisters holding the deadly spent fuel will be one-third under water.

English speaks of the “washing machine effect”: the water level where the canisters will repose will vary with the tides, and salt water going up-down, up-down will cause erosion. English thinks the canisters are too thin and not fully protected. “If a crack is developing, they won’t know it,” he says. The San Onofre crew should have studied the old technique adopted years ago when gasoline tanks were leaking. “They tore out the old tanks and put in double-wall tanks. A leak in an inner tank can be detected right away, and no poisons are released into the environment. There is no protection like that with the proposed Edison canisters.”

Edison’s strategy “was driven by economics instead of safety,” says English. “They have chosen both a bad location and containers that are not very good. The dry-storage canisters must be able to be monitored, inspected — inside and out for radiation leaks — and repaired. Edison came up with a plan with completely unacceptable risks.”

It’s that old mentality of “not on my watch,” says English. Executives cut corners, getting bloated paychecks as profits rise, knowing they will be retired or deceased when despair sets in.

English is particularly concerned about terrorism. “If you store the nuclear waste canisters on the beach, there is no existing adequate defense on the ocean side. A small group of motivated terrorists could attack the interim storage site and spread radioactive materials all over the place,” he says. People within 50 miles would be evacuated — about 8.5 million persons. Abandonment of the region could cost $1 trillion to $2 trillion. Industrial output would plunge, severely damaging the California economy.

“Since California is the sixth-largest economy on Earth, this kind of event could be devastating to both the U.S. and world economy.”

The 1986 Chernobyl accident was in Ukraine, then part of the Soviet Union. “The attitude was that it happened in the Soviet Union because the Russians weren’t qualified,” says English. Japan was considered near-perfect industrially and technically. “But they screwed up at Fukushima,” says English. The Japanese prime minister Naoto Kan came within an hour of evacuating 80 million people in the Tokyo area. The Fukushima disaster almost destroyed the Japanese economy. Dislocated people are still ailing physically and psychologically because of Fukushima.

In common with several other activists, English believes that a mesa across I-5 from San Onofre might accommodate the temporary storage of spent fuel.

“It’s limited space that [Edison] has in its lease with the Navy. It’s maybe 50 to 80 feet higher than the beach storage site. That mesa is the only place that would not be totally stupid. This location would at least eliminate the near-term climate-change threat to canisters.” There is also some space on the ocean side that might work, but Charles Langley of Public Watchdogs believes that Edison has dumped toxic (non-nuclear) waste on that site and wouldn’t permit dumping of nuclear waste there.

So it looks like Edison is racing to complete their onsite storage folly before Aguirre's negotiations or Briggs' lawyering can stop them, so once the waste is entombed it becomes a fait accompli.

If ever there was a situation in need of a court injunction, this is it.

Cassander: Edison had no intention to look for another site, in my opinion. And other sites outside of California just aren't available. English is among those who feel there might be a higher site at Pendleton. Best, Don Bauder

And I thought it was government’s job to protect its citizens, not poison them with nuclear waste. Thanks Governor Brown, your legacy is in the making. Generations will remember this.

Doesn't Jerry have a place in Nevada to retire in?

aardvark: Yeah, one of the Vegas casinos. Beset, Don Bauder

I thought it was up near Reno.

aardvark: It gets cold up there in the winter. Best, Don Bauder

JustWondering: You are far too intelligent to believe that government's job, particularly now, is to protect its citizens. Best, Don Bauder

Mike Murphy: Who will profit? Edison. First, it got ratepayers to pick up the tab for Edison's egregious mismanagement at San Onofre, leading to the failure. This burial strategy is a cheap alternative to supposedly "take care" of the waste. Best, Don Bauder

I have the feeling some lawmakers profit from it along the line too, thats not so obvious, but we all have that suspicion

Murphyjunk: Last year the legislature passed some CPUC reforms. Brown vetoed them. There were charges against Peevey, but former AG, now senator, sat on the charges until the statute of limitations ran out. Peevey great pal of Brown. There are politicians in both houses of the legislature who are in the utilities' pockets. Plenty of money is moving under the table. What are lobbyists for? Best, Don Bauder

Murphyjunk: That is an assumption that you can make without even doing homework on the topic. Best, Don Bauder

Charles Langley: You took the words right out of my mouth. Edison is the one that profits. Best, Don Bauder

Kevin Blanch: I am not surprised if your friend if very fearful. Crooked companies like Edison smash whistleblowers. Best, Don Bauder