Promises of paralysis and LOUDness

Record releases for month of March 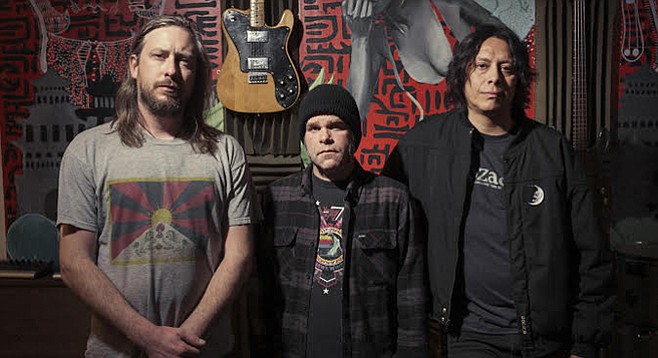 AJ Froman and the Heavy Guilt

The Fictitious Dishes and Se Vende

Earthless will return to the first stage they ever played for a two-night release party at the Casbah on March 2 and 3, to launch their Black Heaven album. “Expect a sensory overload,” says guitarist Isaiah Mitchell. “The music will be loud, the visuals from Mad Alchemy will be loud, the smell of sweat, booze, and weed will be loud. It’ll be packed, so you will be loudly touched.” Produced by Dave Catching (Eagles of Death Metal), the album’s first single, “Gifted by the Wind,” is available online.

AJ Froman’s single, “Goo,” premieres at Winstons on March 9, where singer Sarah Norwood says, “Expect to be paralyzed after the set.”

Enrique Madico of Marujah has a new band called Los Chido whose debut album Puro Paisa Power drops March 10 at the Ken Club. Madico describes the first single, “We Have to Be Whores,” as “the response to the generation X drug culture.”

Sparkle-pop rockers Birdbath will play a release show at Soda Bar on March 23, for a bill that includes local cat-pop rockers Mittens and the Havnauts.

March 24 sees Temecula-based female-fronted alt-rockers Mettle releasing an EP recorded with Grammy-winning producer Erich Talaba — 27 Ghosts, which singer Megan Rice says was named after some whimsical calculations. “There would be about 27 ghosts per person alive today, based on today’s population versus all of the people who have died since human existence...every inch of the world should be haunted by now.”

On March 31, all-girl rockers the Fictitious Dishes premiere their second EP, Frontier Insurance, at Bar Pink, which will serve the Supreme Court Sour, a cocktail named after a lyric on the track “Counting Coup.”

Also new this month is a Dirty Water Records single from ’60s-inspired psychedelic rockers the Loons “Blue Ether” b/w “Saturday’s Son,” the latter originally recorded long ago by garage-rockers the Sons of Adam (which included future members of Love and Blue Cheer).