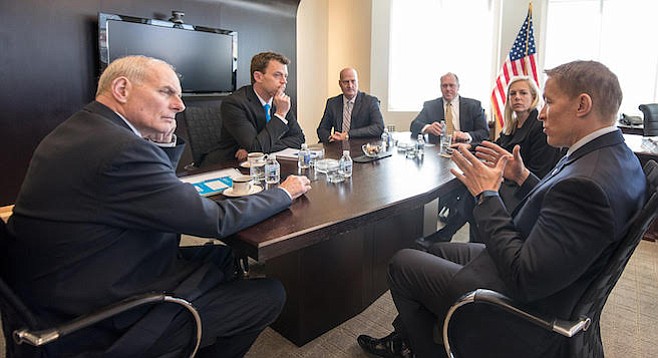 A year ago this month, then–secretary of Homeland Security John Kelly dropped into San Diego for a news conference to blast so-called sanctuary cities for harboring illegal immigrants. "I'm stunned when people say, 'Well, we're not going to cooperate with you’ even in the event of convicted criminals,” said Kelly, using the car lanes of the San Ysidro border crossing as a backdrop.

Then, last April 21, Kelly returned to the San Ysidro border — this time joined by attorney general Jeff Sessions and Republican senator Ron Johnson of Wisconsin, chairman of the Senate Committee on Homeland Security and Governmental Affairs — for a border-fence photo-op and an upbeat assessment of immigration enforcement.

"Our efforts are working," proclaimed Kelly in a Homeland Security news release. "As I reported back in March, we’ve seen a dramatic reduction in illegal migration across the southwest border," continued the secretary, who has since moved up to become White House chief of staff.

Now an audit released February 16 by the Homeland Security's Office of Inspector General has revealed that air transportation provided Kelly for his February trip, which included a stop in Nogales, Arizona, set taxpayers back $64,951. The air tab for Kelly's April excursion, in which he also touched down in El Paso, Texas, was $62,345.

The numbers were considerably higher than the cost of a round-trip ticket on Southwest Airlines because Homeland Security chiefs must fly exclusively on government wings, per the report.

The secretary "requires instantaneous secure communications capability with the White House, the Department, and other agencies," says the document. He or she "must be able to return to Washington or proceed to other destinations on an expedited basis." Also, the secretary "has a heightened need for security because of his/her official duties and public visibility."

According to the document, auditors found 106 cases in which the Homeland Security chief or the department's deputy secretary traveled on government aircraft between January 2016 and November of last year.

Despite the costly air travel, the audit — undertaken "in light of the heightened public and congressional interest in the misuse of government-owned, government-leased, and chartered aircraft" — found nothing amiss.

"Of the 106 trips identified by the Department, 103 were taken for official purposes and, accordingly, were justified," says the report.

"The three remaining trips — one taken in May 2016 by [secretary Jeh C. Johnson], and two taken in September and October 2017 by [acting secretary Elaine Duke] — involved personal travel. Pursuant to the authorization granted by the President in 2004, [the secretary of Homeland Security] is permitted to use government aircraft for both official and unofficial travel. The cost for these trips totaled approximately $80,000."

The officials in question "personally reimbursed the government the equivalent coach fare for each trip," according to the document.

The true elitists are the politicos and their minions.

Isn't it time for clueless Kelly to resign?