Baby rattler at my door

"The whole thing was so frustrating, as there weren't any clear options." 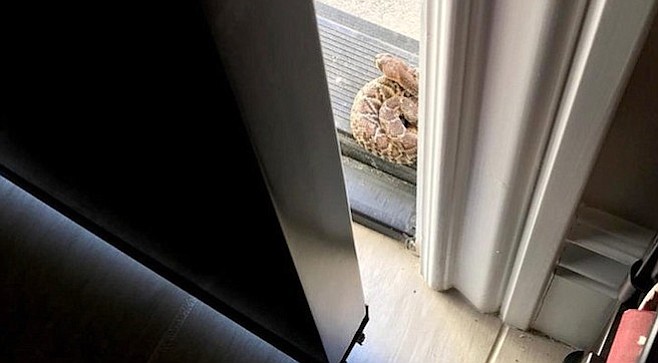 A baby rattlesnake was found by Veronica Alcaraz's sister at her front door on February 12th. 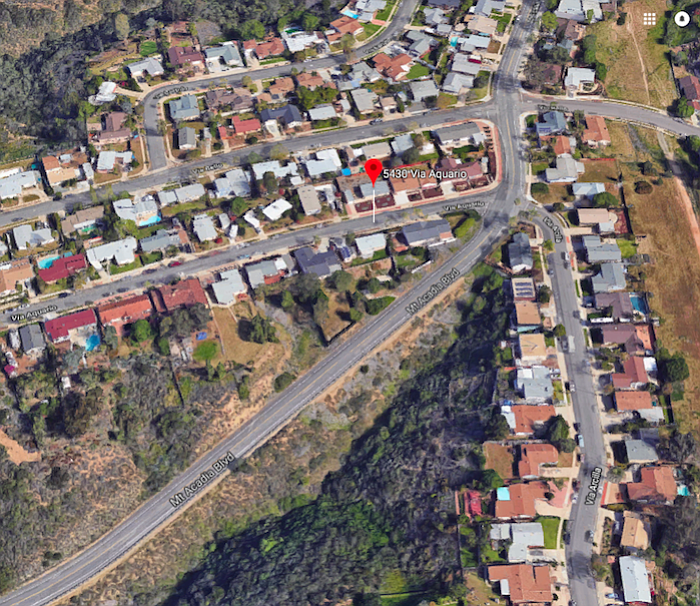 Via Aquario is sandwiched between a couple canyons.

"Can you believe it?! My sister was taking things to and from her car when she spotted it. It was curled up right at the door entrance. The crazy thing is she was just pulling up weeds in that area a little before." Alcaraz said its small size made her nervous there could be more nearby.

This was an early sighting, as snakes usually don't make an appearance in nearby Tecolote Canyon neighborhoods until spring. While Alcaraz's sister lives near a canyon, she doesn't live right on a canyon. The snake had to cross the road to get to her front porch on Via Aquario.

Alcaraz's sister and brother-in-law managed to get the snake into a plastic container but weren't sure what to do next. "The whole thing was so frustrating, as there really [weren't] any clear options, plus it being Monday, [it appears] county animal control is closed." 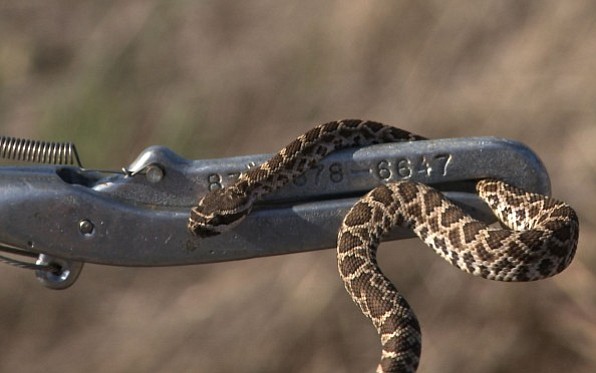 The county gets calls about snakes all year long but much less during the cold months of November through February.

Alcaraz turned to social media to get advice while her sister continued to work the phones looking for help.

Advice ranged from setting it free to killing it  — though one person warned it was illegal to kill a rattlesnake. Someone commented that rattlesnakes are solitary hunters shortly after birth so it wasn't likely there would be others around. Someone else commented that they congregate for warmth so others were probably nearby. Rumors abounded that a baby rattler's bite is more deadly since they release all their venom in one bite versus an adult snake, which has more control. 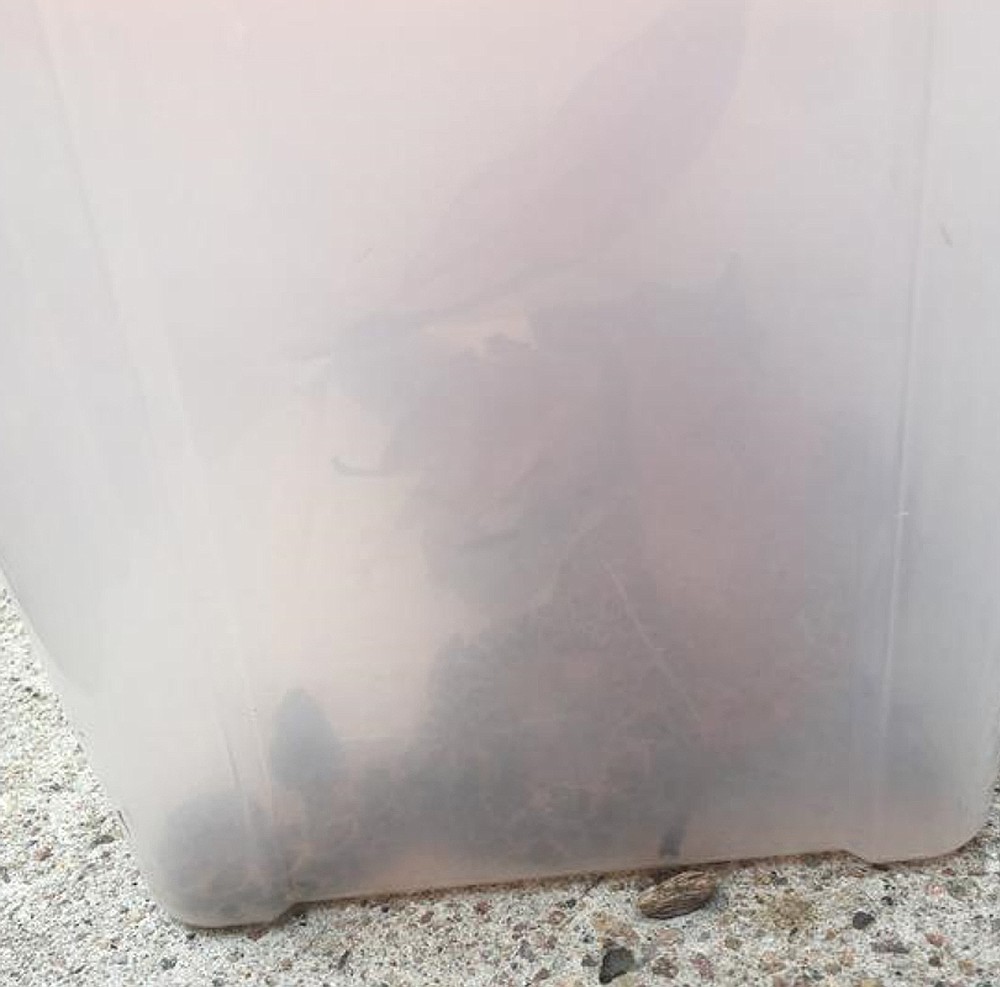 With animal control closed on Mondays, the baby rattler had to hold tight until Tuesday.

Other neighbors shared their experiences with finding snakes, including rattlesnakes, in their homes, saying they can squeeze through any small opening. One longtime Clairemont resident said she witnessed a gentleman getting bit by a baby rattler at Black's Beach a few years ago during the spring when they are active.

"He did not have a cell phone, but I had [Scripps] Green Hospital on autodial and called them to have an ambulance ready at the Torrey Pines State Beach parking lot. I helped the guy walk about a mile on the beach to the ambulance. He ended up being okay after receiving the anti-venom at Green."

While Alcaraz fielded advice on social media, she called Project Wildlife, where she was told they don't work with reptiles.

"Everyone's suggestions were to put it back in the canyon but I didn't feel secure to do that, as many people, including ourselves, frequently hike there, so why would I do that? Then we thought to drive it out somewhere far but then thought twice to find that potentially illegal or a danger to such local wildlife there. I was at odds and so the snake remained in the container overnight." 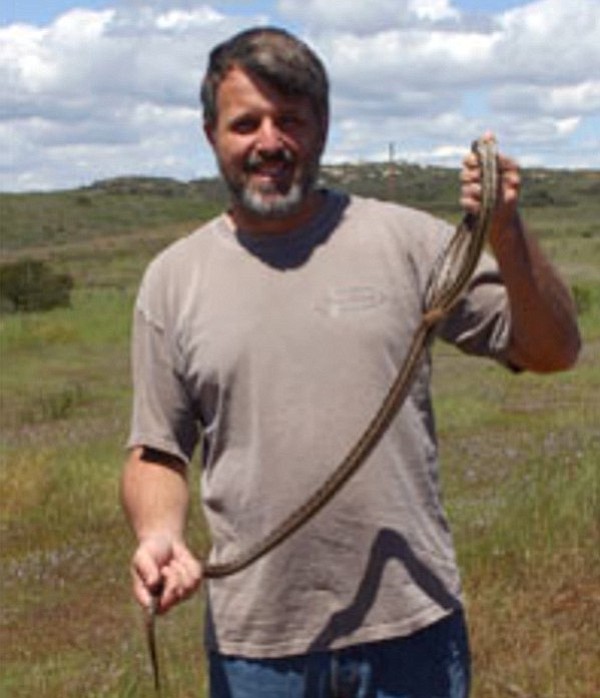 Dr. Bradford Hollingsworth, curator of herpetology at the San Diego Natural History Museum, identified the snake from Alcaraz's photo as a Western rattlesnake (Crotalus oreganus), found in coastal and mountain areas of Southern California and Baja. He said even though snakes become active in the spring, they are known to emerge on warm winter days in San Diego.

I asked Hollingsworth if rattlesnakes are solitary hunters. "Yes, they are ambush hunters." What about bunking up to keep warm? "Yes, but only during the colder seasons, in what are called hibernaculum [tent for winter quarters]. In [San Diego], this is rare [and] more common in higher latitudes."

Is a baby rattler’s bite more deadly? "No, both baby and adult rattlesnakes are equally dangerous [and] many variables go into the human reaction to an envenomation [process by which venom is injected by the bite]….

“Rattlesnakes are part of our natural environment. They provide rodent control as predators, but also are preyed on by raptors and coyotes." Coyotes are plentiful in Tecolote Canyon and are often spotted in nearby neighborhood yards.

Alcarez ended up getting ahold of animal control the next day. "They came to get it, no charge, no questions."

I called the county's animal-control emergency line around midnight on February 16th and was told that there is always someone ready to take calls. While they do get calls about snakes year round, there are less during the colder months of November through February. I was told that animal control only sends someone out if the snake is considered dangerous, like a rattlesnake. If Alcaraz had called the emergency line, someone would have been out on Monday to take the rattler. The county does release the snakes back into the wild.

My brother saw a baby rattlesnake this weekend in Bay Park. They are so tiny - here's one so you can see how small they are. http://www.sandiegoreader.com/users/p...

County is reporting it too. https://www.countynewscenter.com/rattlers-coming-out-of-hiding/ 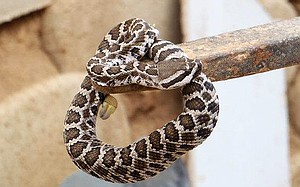