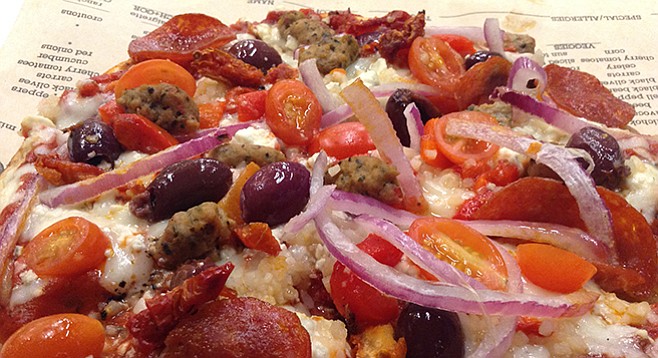 It means “Bon appetit,” in Hungarian, she says. She’s from Budapest. We’re sitting in this brand-new, two-week-old pizza-and-salad joint, in East Village.

Man, I’ve been waiting for this place to open for months. It brightens up the kinda scuzzy stretch of Park Boulevard between Market and Broadway. Opposite, on Park, is a giant hole where Quartyard was. Think it’s going to be a 30-story condo tower. But Zorka’s husband Terry looks pleased about that. 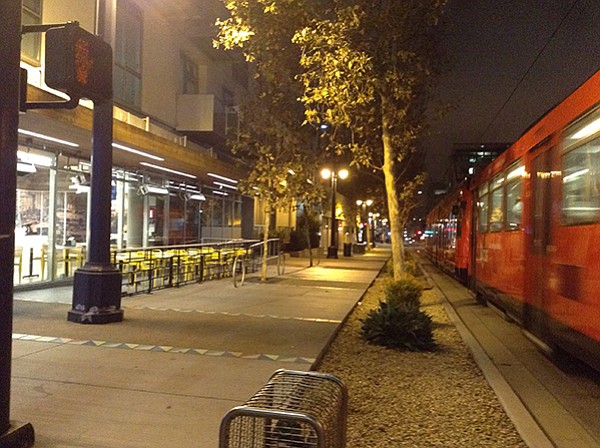 “Well, the crane went up last week, and now they’re bringing 300 workers in, to start construction,” says Terry (co-owner with Zorka). “We’re hoping some of them are going to like pizza at lunchtime.” 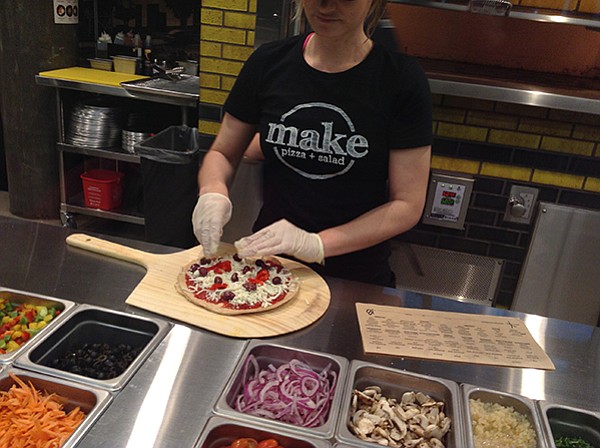 Katie loads up on the Kalamatas.

I’m here because, well, the idea of pizza plus salad sounds so healthy. And, too, it’s so easy. It’s right next to the Blue and Orange line trolley. 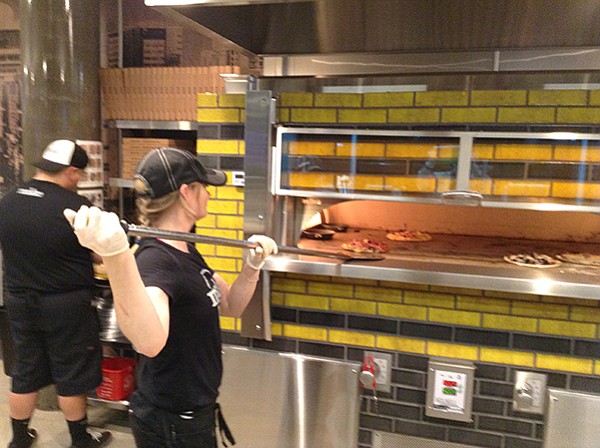 My creation goes into the 500-degree oven,

Plus, this chilly afternoon, I see they have a sidewalk patio with heating. And inside, I see they’ve kept the pizza formula simple. One size: ten-inch; one price, $10. From Margherita to veggie to buffalo chix to Supreme. Or, you can choose your own. And still ten bucks, no matter how much you load up your pizza. 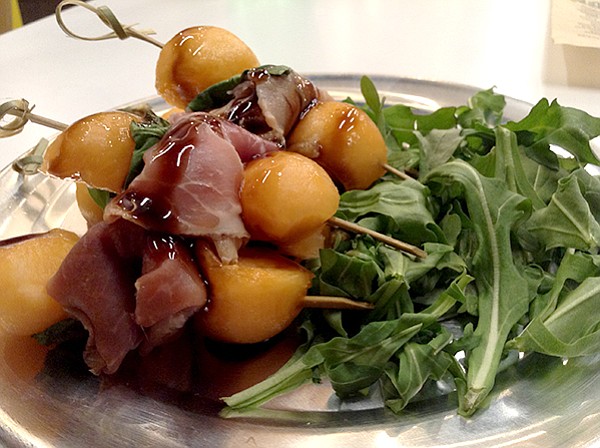 Katie, one of the servers, is standing behind the glass that protects all the ingredients. I realize I’m getting the chance to create the greatest pizza ever made. Even the crust is a choice. Traditional, wheat, or gluten-free? Taste-wise, says Katie, wheat’s got the most flavor. I go along. The dough dude grabs a ball of brown dough, squishes it under a hot disc, then hands it to Katie. 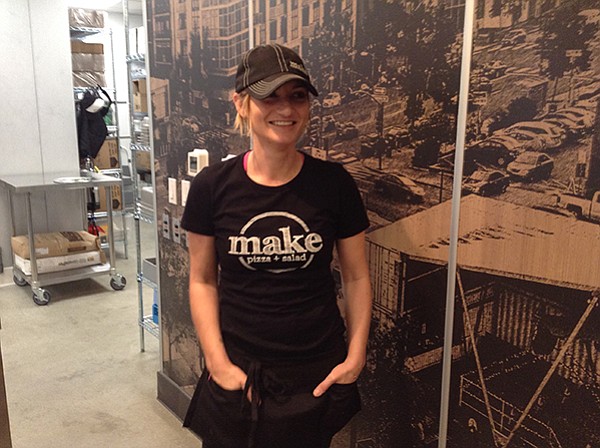 Taste-wise, says Katie, wheat’s got the most flavor.

Now the questions start. “The sauce?” Pesto, BBQ, olive oil, red, or white? I go red. Next, choose from baby mozzzarella, cheddar, feta, goat, gorgonzola, and vegan, among others. Decision: mozzarella and gorgonzola. 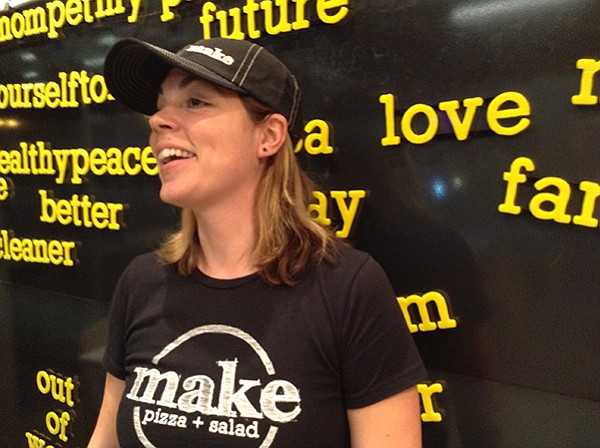 Zorka arrived from Budapest with a business degree in hospitality.

Veggies? Oh, Lord. Eighteen to choose from. I see red. Go for baby tomatoes, sun-dried tomatoes, red onions, red peppers. This is gonna be one red pizza. But, be still my heart: I see they have, alongside the chopped olives, Kalamata olives, the ones you can actually taste. The ones you don’t usually get offered in an all-you-can-eat scenario, because Kalamata olives ain’t cheap. But here, Katie keeps plopping those suckers on till I say stop.

No hesitation on any of my meandering impulses. At the end we put chicken sausage and pepperoni for the protein (I almost go for Italian sausage...or meatball or chorizo or prosciutto or salami). And then she drops — oh, yeah — fresh chopped garlic all over it.

You can’t go on and look these folks in the eye. Besides, this choosing business has been hard work, mixing this, rejecting that. I’m exhausted. I give Katie the nod. She slides the Bedford Pizza onto a paddle and into the yellow brick oven (“500 degrees,” she says).

Result: man-oh-man, if I do say so myself, we have ourselves a red-and-white masterpiece, under a swirl of red and white onion curls.

’Course, visuals are one thing, taste is another. I know I haven’t balanced out the flavors. Next time I’d definitely go for Italian sausage or salami, but really, I’m impressed. Especially that combo of the gorgonzola and red pepper and baby tomatoes.

I know other places do this customer choice thing, but it’s pretty much a first for me, and knowing the price is fixed to ten Washingtons no matter what or how much you pick, makes it really easy.

Have to ask Zorka (her name means “sunrise” in Hungarian) what happens if a customer gets really, really, greedy, and keeps on adding and adding.

“Well there’s only so much a ten-inch pizza crust can support,” she says, “and we warn customers that too much will make it soggy, and the oven won’t be able to correct it. But this hardly ever happens.”

She arrived from Budapest with a business degree in hospitality, became a manager in a smoothie place, then owned a place up in Valencia, north of L.A.

She and Terry decided to come down to San Diego and launch this pizza idea. “I’m a big-city girl,” she says. “San Diego has that feel, and it’s growing. That’s why we chose East Village.”

But why only one size pizza? Why no other Italian dishes? “I like things simple. And especially at lunchtime, I think working people want to be in and out in ten minutes or so.”

Actually, they do have a whole salad system going, too. The regular “classic” salads like the Caesar or spinach-and-gorgonzola (which comes with bacon, eggs, cranberries, and walnuts) cost $11. Or you can build your own unlimited salad for $9 (added protein goes for $2 each). And they have a short list of “bites.” Burrata cheese goes for $8, skewers loaded with melon and prosciutto, or an antipasto mix of salami, cheese, Kalamata olives and greens, are $6. And they have desserts such as tiramisu for $5. That’s about it.

I decide to get one of those melon-and-prosciutto skewers to take back to Carla. Nice little treats and pretty filling.

Now. Can’t leave without saying “Thank you. I am full,” in Hungarian.

Hmm. Look it up... Uh, “Köszönöm. Tele vagyok?” Hey, when in Little Budapest…