"Police are doing the best job they can under impossible circumstances." 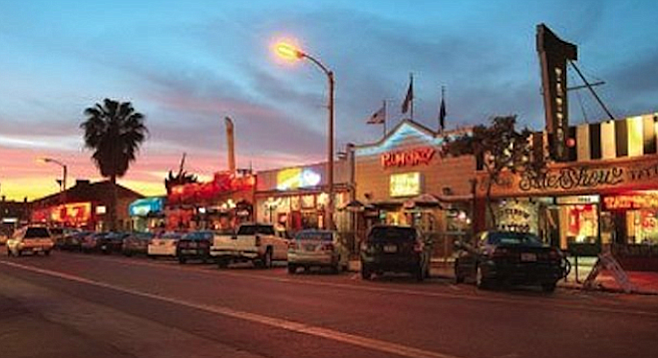 Pacific Beach continues to be one of San Diego's highest crime neighborhoods, according to new stats released by the San Diego Police Department.

During 2017, the police department logged 26 rape cases in Pacific Beach, only one behind East Village during the same time; Hillcrest had the third highest, followed by Mission Valley East, and North Park.

Pacific Beach had the highest of all San Diego neighborhoods for residential burglaries. Police investigated a total of 121 cases; North Park had the second most (114), followed by La Jolla (85), Mira Mesa (73), and Rancho Bernardo (69).

In fact, Pacific Beach has the highest number of residential and non-residential burglaries in San Diego.

Lastly, the community had the second highest number of car thefts as well, 52 less than San Ysidro; again, North Park was close behind with 148 thefts, followed by Mira Mesa (118), and East Village (108).

Marcie Becket from SavePB.org. blames much of the violent crime on the abundance of alcohol licenses in Pacific Beach.

"[Pacific Beach] has consistently ranked in the top 3 communities for crime," wrote Becket in a February 11 email. "However, residential neighborhoods [in Pacific Beach] have very low violent crime. Most of the violent crime is alcohol-related and occurs in the ‘bar-district,’ which encompasses several blocks on Garnet Avenue and Mission Blvd. In that area there are 10 times more alcohol licenses than allowed by state guidelines."

In order to start cutting down on violent crime, Becket says the city needs to act. She says other cities have taken responsibility for issuing alcohol licenses away from the state and made it a local decision. Several community groups have suggested San Diego do the same without any luck.

"City Officials have ignored these requests and just keep throwing police at the problem, which doesn't address the underlying cause and which also diverts police resources from other communities. The police are doing the best job they can under impossible circumstances."

Wherever there is a concentration of businesses selling "good times" and booze you can go to the bank on a high crime rate.

North Park has too many places selling alcohol, so that's why it comes in 2nd to PB all the time for crime.

Great story. Sorry for the neighborhoods around the Garnet bar district. Sorry for the neighborhoods around the bar scene in North Park too, even if (sacrosanct) property values are increasing. Mayor Faulconer used to represent PB when he was a city councilman and he took brave action to ban booze from the beach after a Labor Day riot. Based on these crime stats, some similar draconian City measure is justified to return these areas to the residents. Maybe end all new alcohol permits and cut back existing bar hours.

Let's be honest with ourselves. The aging baby boomers want everything to be just so. I suspect the average age in some of these zip codes is quite young, in fact I buy my groceries in PB and I know there are a lot of youngsters walking the streets and cruising the beach area. I did when I was in my 20's and full of whatever people in their 20's are full of.

That is not to say these acts are of no consequence, they matter because someone got hurt some how or way and that always matters. Does it require a drag net law enforcement response to keep the barbarians at the gates? Hardly. Some of this stuff will only go away with time and age. When PB stops being the place to go for entertainment and companionship for that age group this stuff will go with it . I suspect some of this is also related to homelessness. Desperate people tend to do desperate things. There is a homeless issue that is visible in PB and that is relatively new. It used to be small enough to not see it. Not any more.

When you can outlaw youth you can make this go away by statute. That doesn't mean we can't encourage responsible behavior and insist that merchants behave in a manner consistent with the public good. When bartenders send customers out the door stumbling drunk, there's a problem that needs to be addressed. Boozed up 20 somethings will never disappear though. It is the nature of the beast. Make it easy to get sober rides home and reasonable response times to crimes of violence. Get help to the people that need it and we have resources for. Then live your lives. We've got a good thing going here in San Diego. Let's not turn it into an old people's retirement community that rolls up the side walks at sunset. If that's your deal I recommend Florida. We do things differently here.

Well said and I'm pushing 60. "Embrace the sorrows of the world and you will learn to live there". The Buddha.

Same Crimes as different parts of the City of SD occupies the verious top crime spots while all the ENTERTAINMENT neighborhoods suffer the same blight year after year.

The solution is to put a special tax on ENTERTAINMENT VENUES and use that money to fund enhanced security not only in front of these businesses but also in the surrounding neighborhoods! Good luck with that since these operators all donate heavily to our elected officials that then smile and look the other way while crime continues to occur!

s it is now these venues are making a bundle while costing the rest of us huge bucks in additional policing and high insurance prices!

BTW: The ABC is only too ready to approve ever more Alcohol Licenses, so don't look to them for any relief of enforcement unless some operator is selling to minors or some other major No-No.

Shamus, you defend the indefensible and with a phony mellow tone as you do it. Are you really blaming what goes on in P.B on homeless people? To statistical facts about high rates of rape, aggravated assault, residential and non-residential burglary and car theft, you claim, "That is not to say these acts are of no consequence," but "we've got a good thing going here in San Diego. Let's not turn it into an old people's retirement community." Little chance of that happening when our "20-somethings" binge-drink alongside plenty of older regular boozers who get loaded in the bars along Garnet and Mission until they're blind drunk and then don't give a rat's ass about what happens next. Is it really on us to "get help to (these) people that need it" with "resources" we don't have?

Better to crack down at the source of the problem: run routine DUI checkpoints in the area; enforce underage drinking laws; put a moratorium on new liquor licenses and reduce hours of operation for existing establishments because of proximity to residential neighborhoods. Rowdy patrons will disperse in their quest "for entertainment and companionship" and City Hall will have done its' job.

Erin, are you suggesting that Dorian contact the rapists, assailants and thieves to get their thoughts on what makes PB such an alluring locale for committing crime? In law, there is the doctrine of "res ipsa loquitur" which means "the thing speaks for itself". I would say that in this instance, the statistics are the thing that speaks for itself.

As for the comments by Shamus and others, it's disturbing that you think rape, assault and theft are only problems in the eyes of old people. I went to junior high and high school in PB in the 80's and ran with a pretty fast crowd, however, raping, assaulting and/or stealing was never on our "to do" lists! Please don't blame criminal activity on youth. Criminals of any age tend to be attracted to easy targets and it doesn't get much easier than finding a bunch of drunk people all gathered in one area.