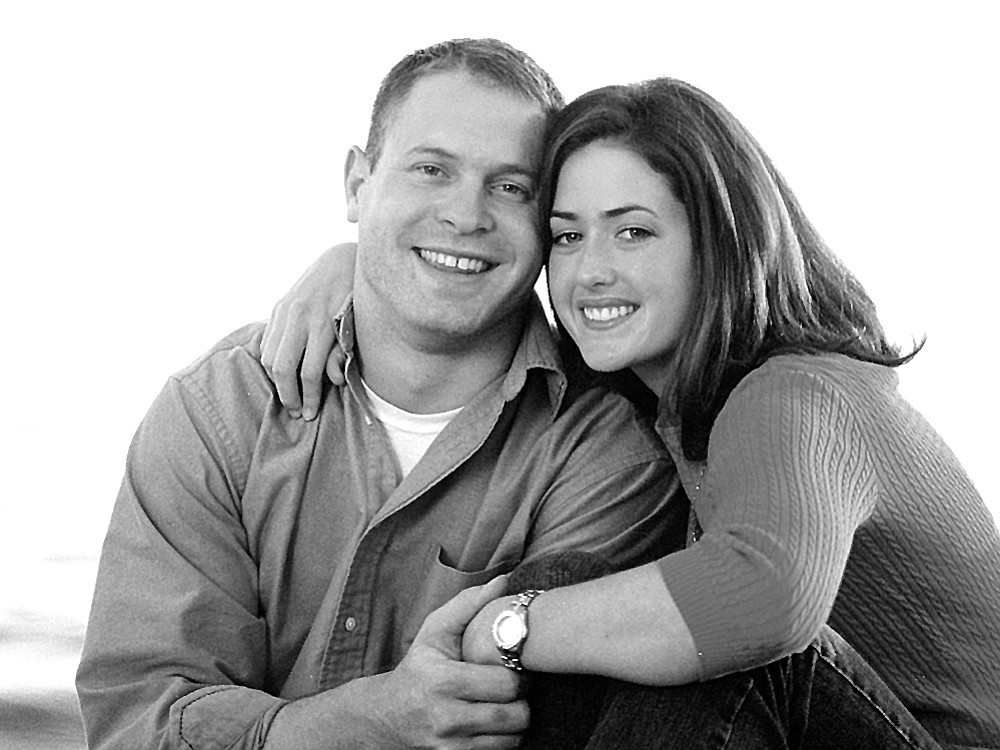 Some Women You Want to Hate

Lt. Weinpel knew Ms. Smith was the girl for him. “From then on, it was just a matter of how am I going to finance the ring?” The lieutenant, who flies AH-1 Whiskey Super Cobra helicopters for the Marines, knew he was being deployed to the Southern Pacific. As the couple grew closer, they spoke in hypotheticals about their future. “I would say, ‘What if there were a person who was going to leave?’” 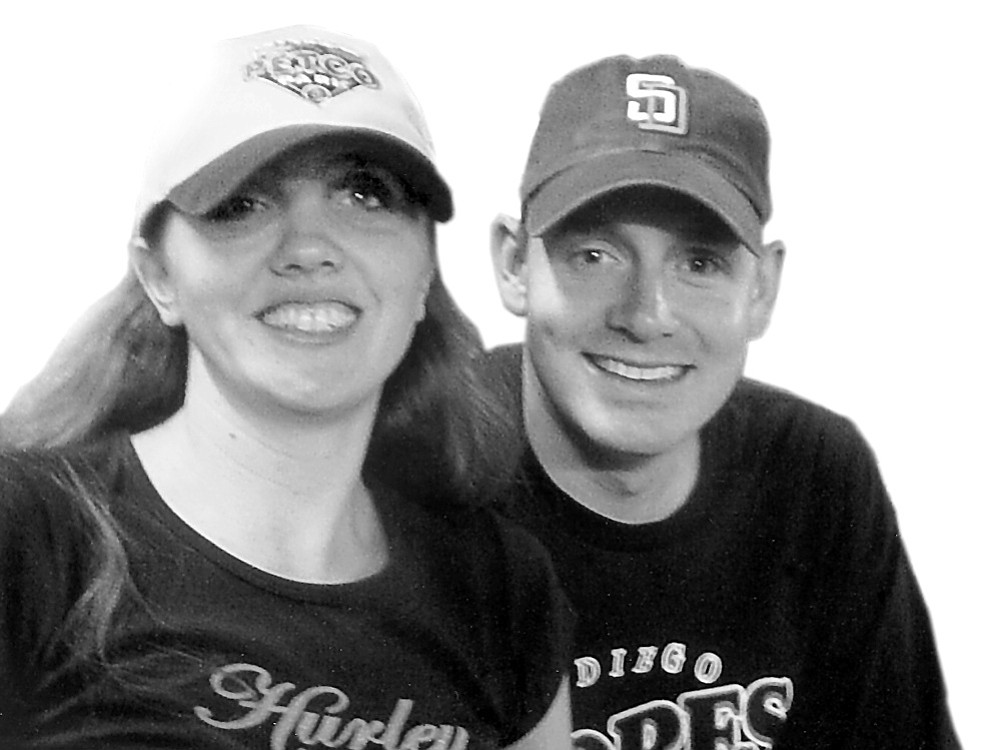 A Navy Guy Makes His Move for a Home Run

With Ms. Henderson still blindfolded, Mr. Cornforth walked her to the edge of the infield. “That was the cue for the music to start. They walked to the pitcher’s mound and faced home plate. Ms. Henderson still had no idea where they were. “I gave my speech. I told her our time together had been amazing.” When Mr. Cornforth finally removed the blindfold, his friends turned on the lights. “I got down on one knee.” 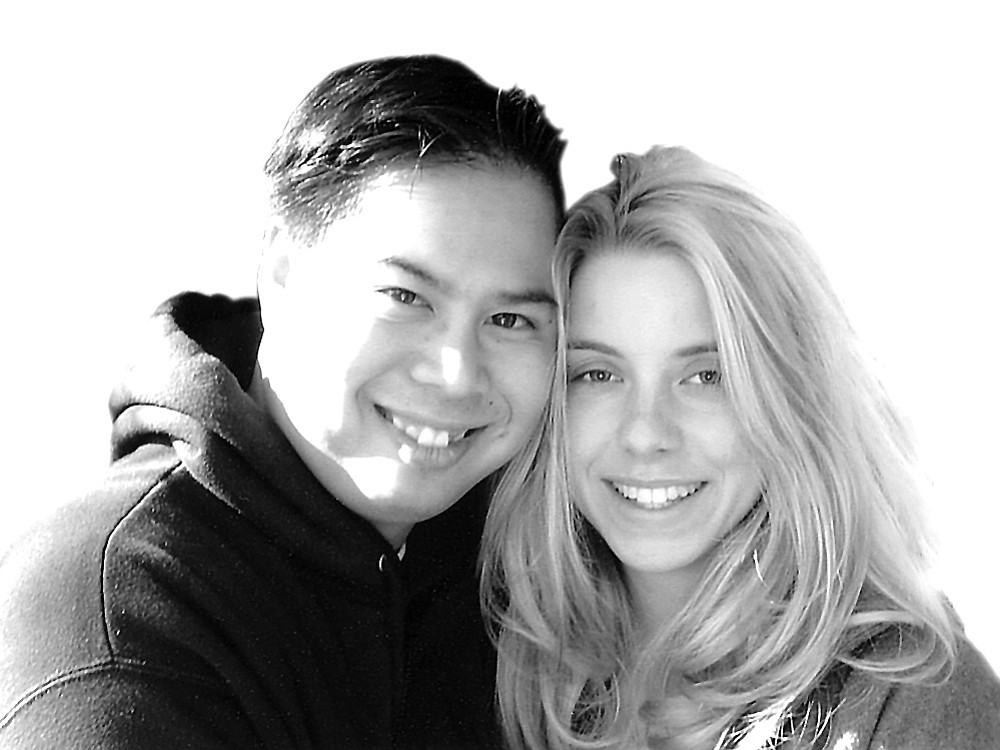 Erwin Has no Bad Qualities

“I met her at a traffic light,” Mr. Castillo says and chuckles, “at the corner of Mira Mesa Boulevard and Camino Ruiz. I was in the left turn lane talking to a friend when a silver VW Jetta pulled up beside me. I thought, ‘Wow!’ Brianne was going to the bank and wanted to get into the left lane. I rolled down my window and told her, ‘I’ll let you in if you give me your phone number.’” 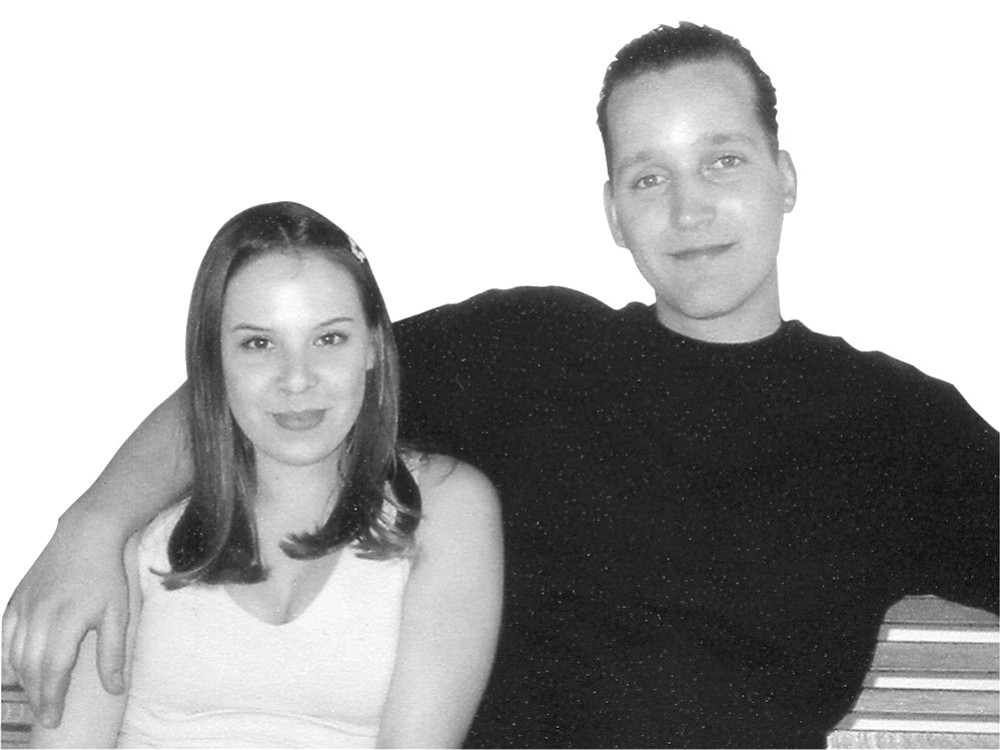 “I got hives on my back, face, and neck. We got some Benadryl. Then he took me to the hospital.”

“I had the ring in my pocket,” Mr. Morris says. “When they were checking her in, the nurse asked her, ‘Who’s this?’ and pointed to me. She said, ‘My fiancé.’ I didn’t want her to lie to the nurse. So, I got down on my knee and said, ‘Baby, will you marry me?’” 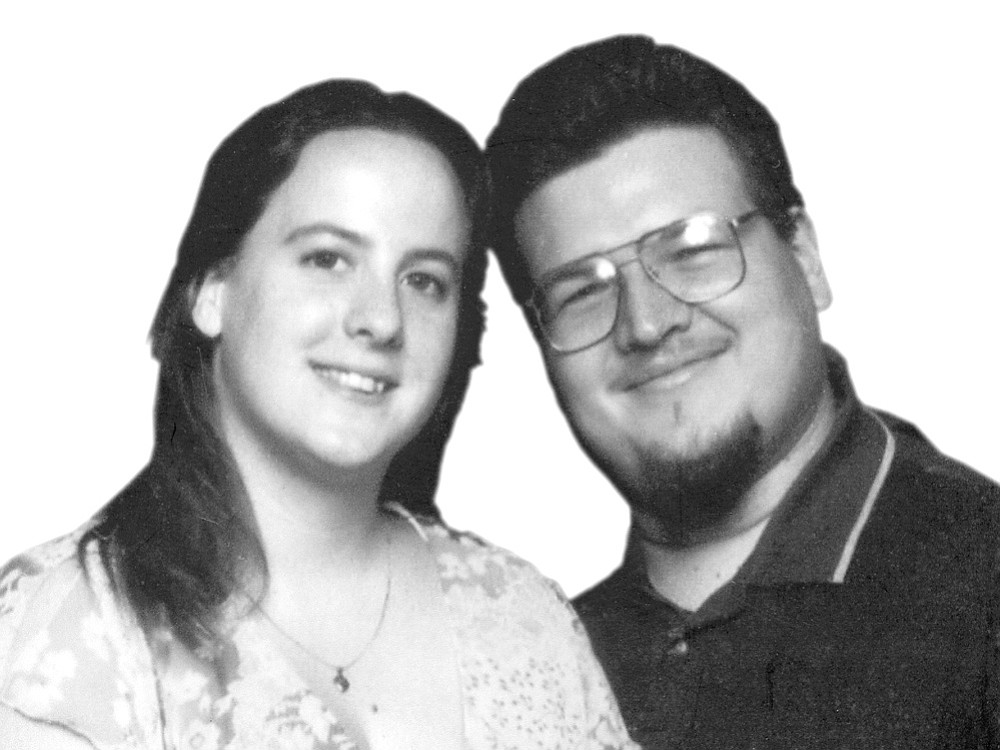 At the Denny’s at Fletcher Parkway and Navajo, Mr. Burke introduced Ms. Skinner to his favorite shake, the grasshopper, which would also become her favorite. The two discovered that they drove the same kind of car (1991 Toyota Corolla), had the same birthday, and had been born at the same hospital (Mercy). They also both liked French fries with ranch dressing. A month later, Mr. Burke told Ms. Skinner he loved her. 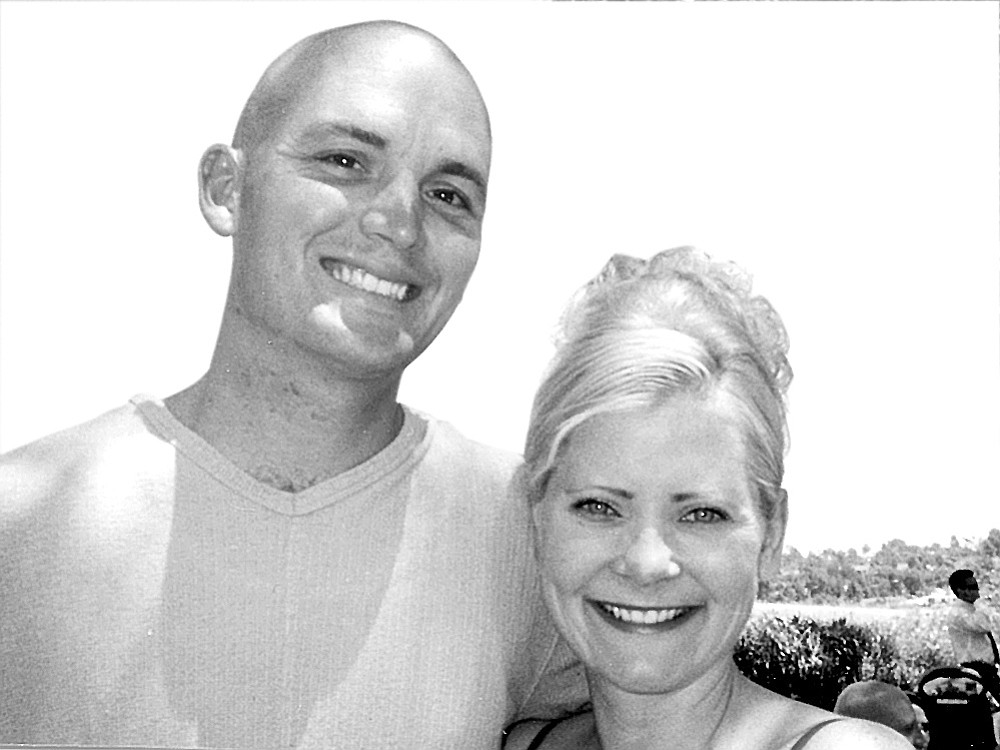 Picked up at Yogi’s

Mr. Pleso deployed to the Middle East in July 2002. He was gone for six months, training in Kuwait. “We e-mailed a lot while I was gone,” Mr. Pleso explains. “Plus some regular letters.” He got back in December 2002 and was re-deployed a month later to Iraq. “That one was harder,” Ms. Lee says. “We weren’t expecting it. And Jeremy said, ‘I don’t know where I’m going to be or what I’m going to be doing.’” 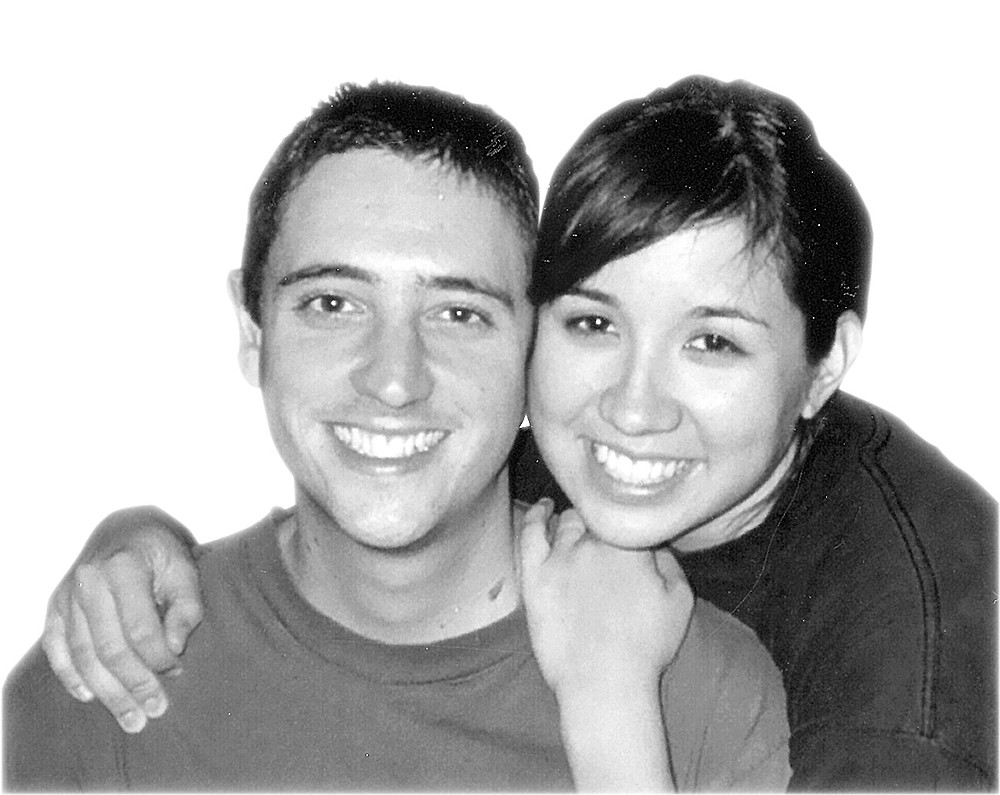 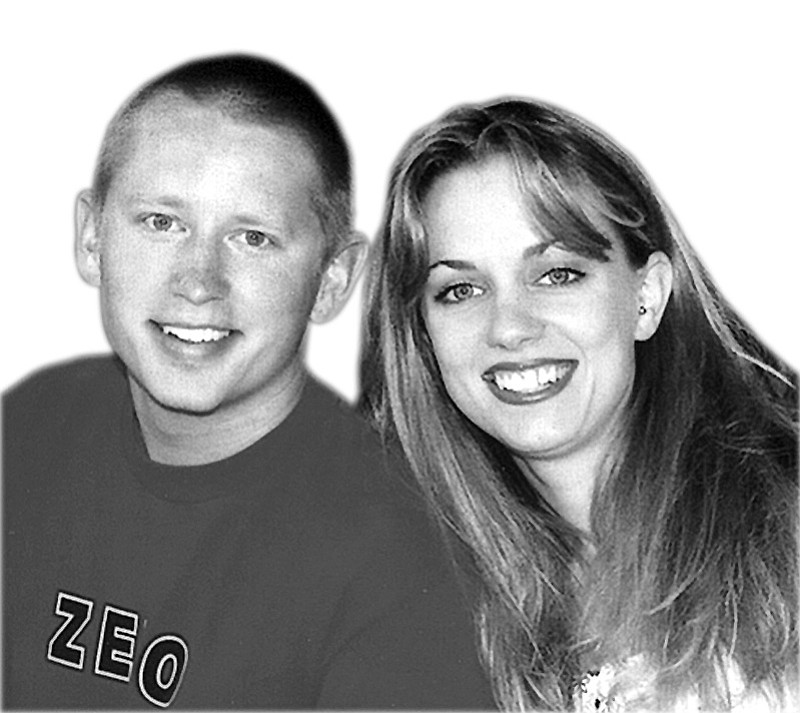 “We went to Maui. I didn’t know exactly where I was going to propose. For the first three days, I carried the ring in the box everywhere we went. I was worried she’d wonder why I always had a backpack with me. Finally, the third night we were there, we took a walk at sunset. I wanted to walk farther to get away from everyone. Desiree said, ‘Let’s just sit here.’” 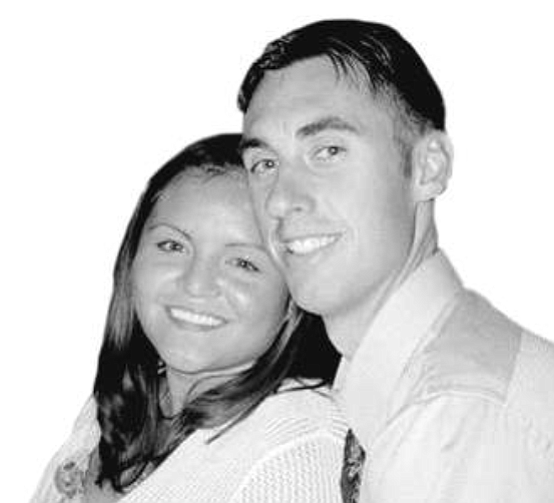 I said I Love You at Buffalo Joe’s

Mr. Cook said “I love you” first, on New Year’s Eve 2002. “We were downtown at Buffalo Joe’s.” Miss Ortaleza said “I love you” back. The crowd was so loud, Mr. Cook didn’t hear. When Miss Ortaleza sent a letter soon after signed “Love, Melissa,” Mr. Cook was puzzled. She had been careful never to use the L-word in her missives. Later she told him, “Didn’t you know? I said ‘I love you’ back at Buffalo Joe’s.” 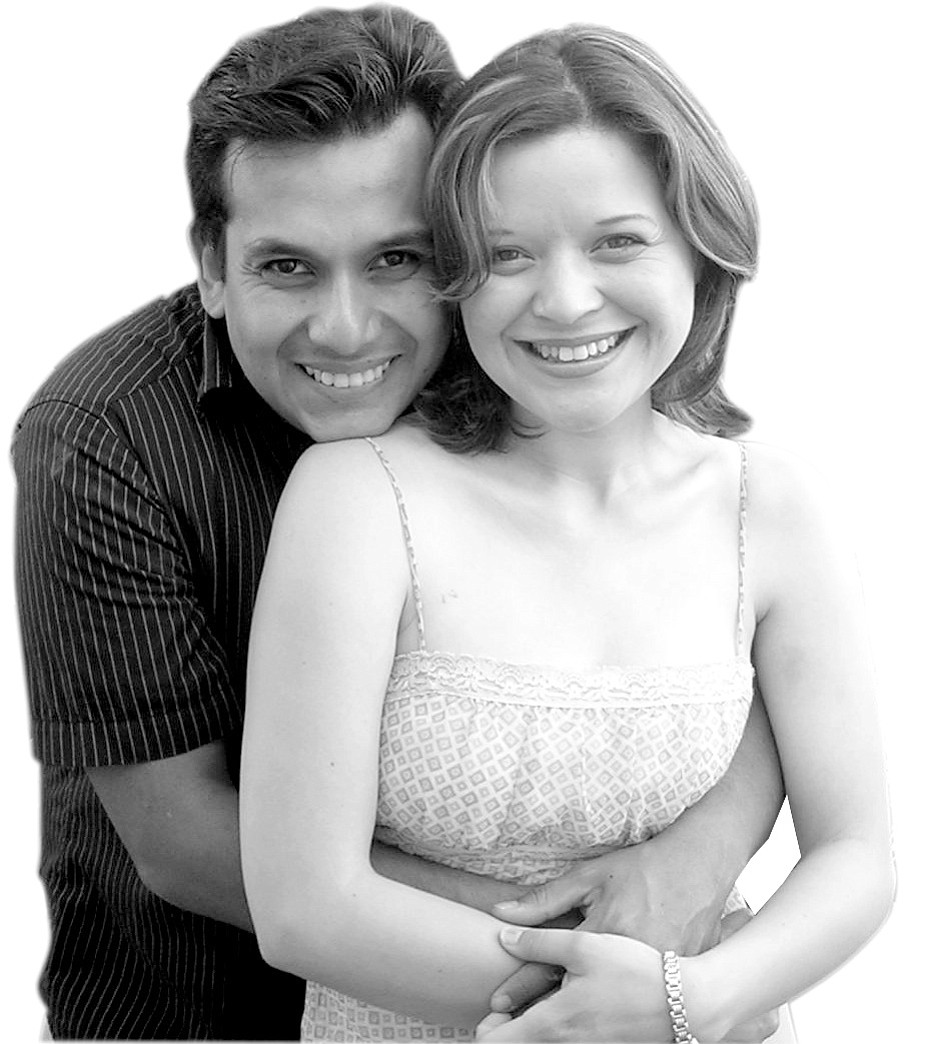 The couple walked around downtown, then ended up at Café Lulu. “We talked until 2:30 in the morning,” Miss Arroyo recalls. “He talked about his family and about his mother. I liked that. I fell in love right away. He was so charming and genuine.” When it came time to pop the question, Mr. Rojano consulted his friends. “They all said to get a limo and go for a hot-air balloon ride.” 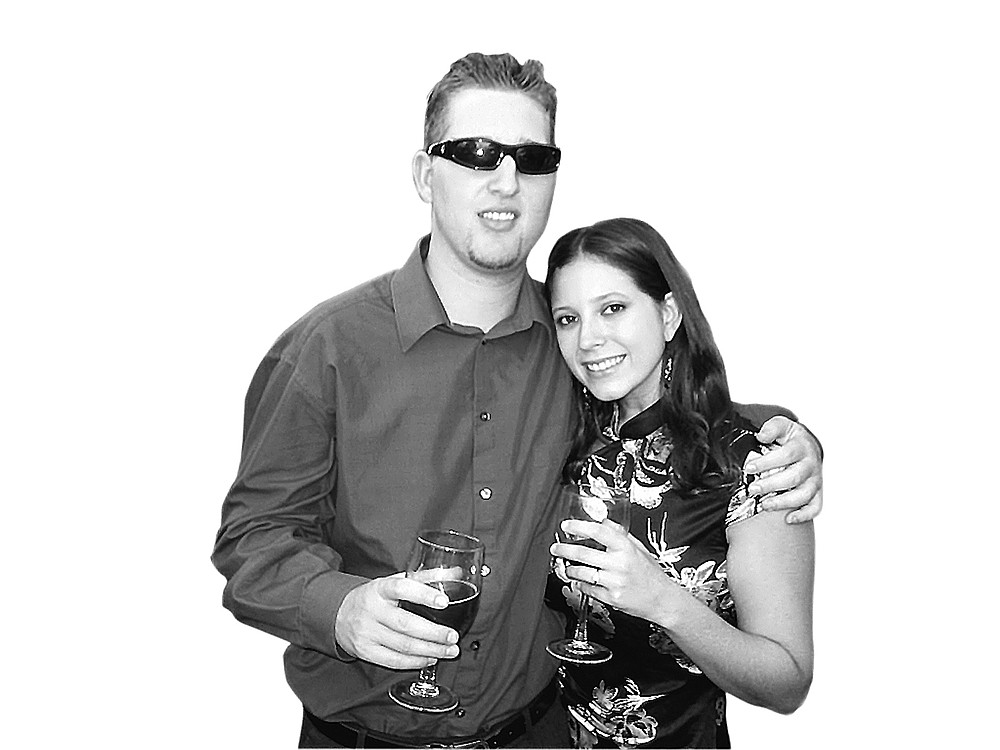 “We were singing karaoke and playing pool,” Mr. Strom remembers. “I noticed Kathryn was a really good pool player. A hustler, you might say.”

“I’m not a hustler,” Miss Stafford corrects her fiancé and punches his arm. “I just played a lot of pool in college and got to be pretty good.”

Later in the evening, Mr. Strom tried to kiss Miss Stafford. “I was, like, ‘No way. You’re off-limits,’” Miss Stafford remembers. 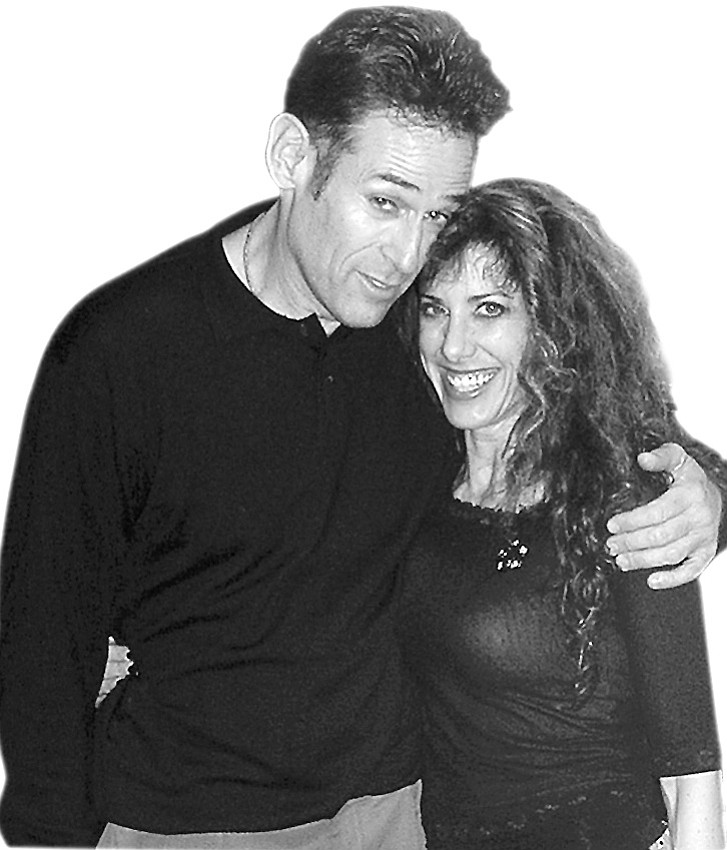 For their second date, Miss Grifkin and Mr. Rasky went to a Jewish Singles dance on Christmas Eve at E Street Alley. “It’s one of those places where you run into all the people you used to date,” Mr. Rasky says.

In fact, Mr. Rasky did run into an old girlfriend. He left Miss Grifkin’s side to say hello. “I was actually impressed that he was able to keep it clean with an ex.” 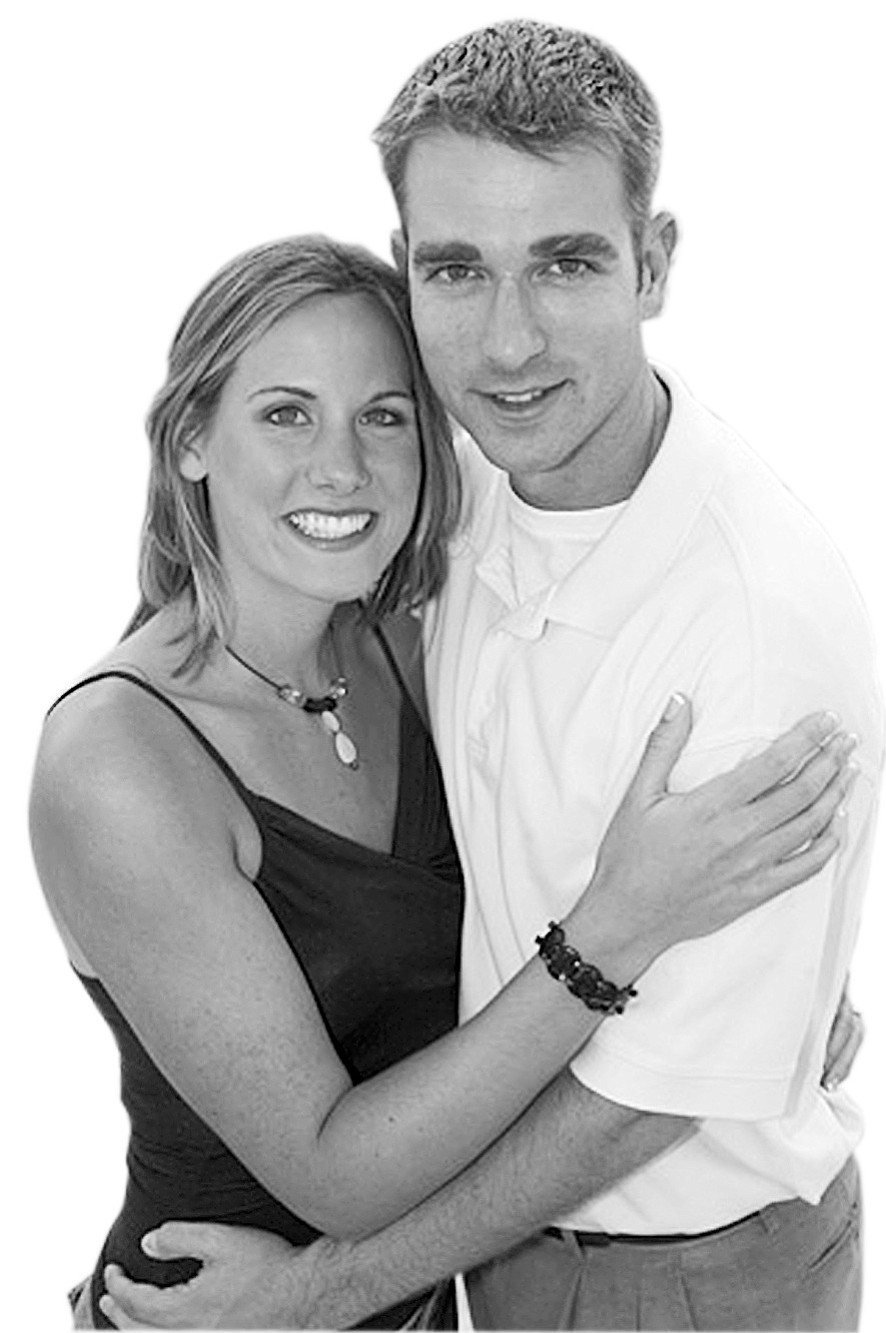 “I had her friend Mindy take her to the Top of the Hyatt downtown ‘for drinks.’ When they walked in about 7:00, I walked out from behind a short wall. I really surprised her. She started crying. She told me later that she knew right away what was going on. I got down on one knee and asked her to marry me. I had never told her ‘I love you’ until that very moment.” 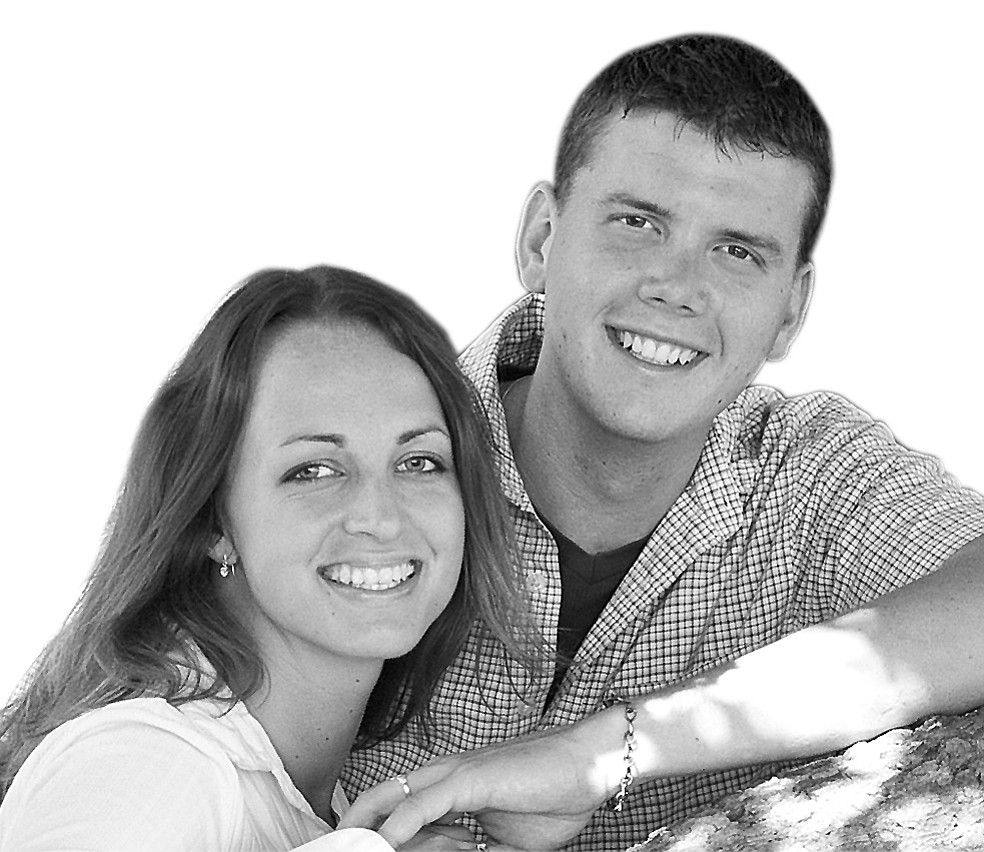 She Thought of Becoming a Nun

Three months later, in February 2003, Miss Kovacs was attending a religious retreat. Mr. Englefield was working at the retreat as a cook. “One morning, I came into the dining room first thing looking for coffee,” Miss Kovacs remembers with a smile. “I need my coffee in the morning. I saw Josh. I asked, ‘Where’s the coffee?’ He looked at me for a long time without saying anything. I mean, really looked at me.” 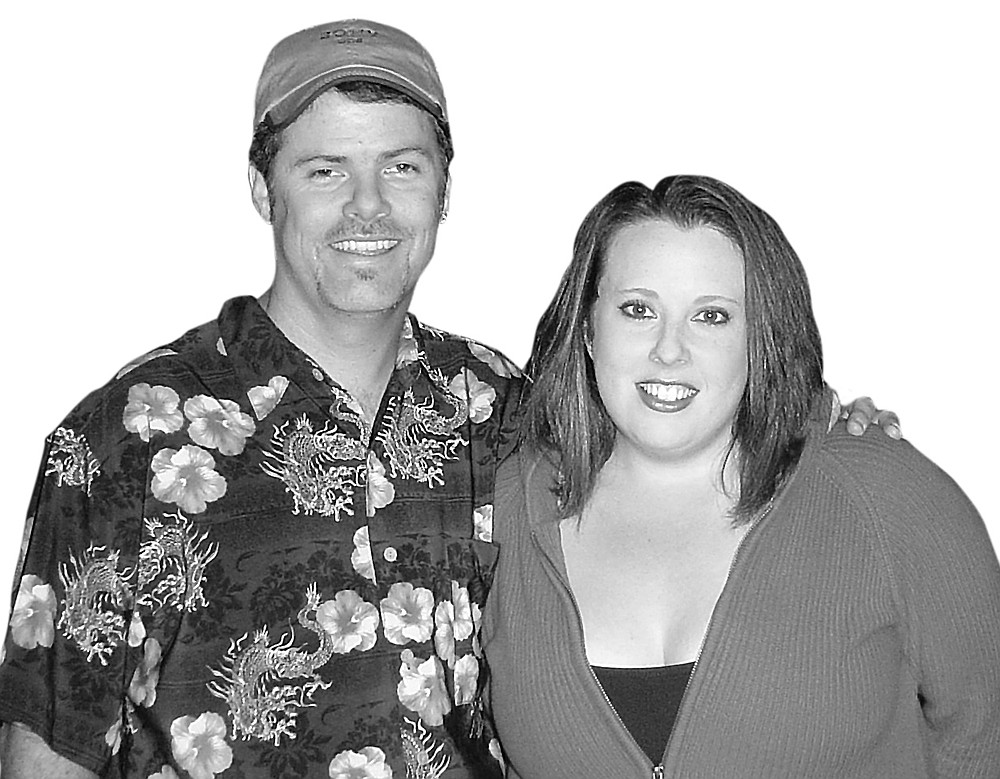 For their first evening together, Mr. Duncan and Miss Eden double-dated with Kerri and Saul. “We went bowling at the old Palomar Lanes in Escondido,” Mr. Duncan says. “Then we sang karaoke at the Sunset Lounge.”

“He sang a lot of songs,” Miss Eden says and laughs.

“I asked her what song she wanted me to sing,” Mr. Duncan remembers. “She said, ‘Good Morning, Beautiful,’ by Steve Holy.” 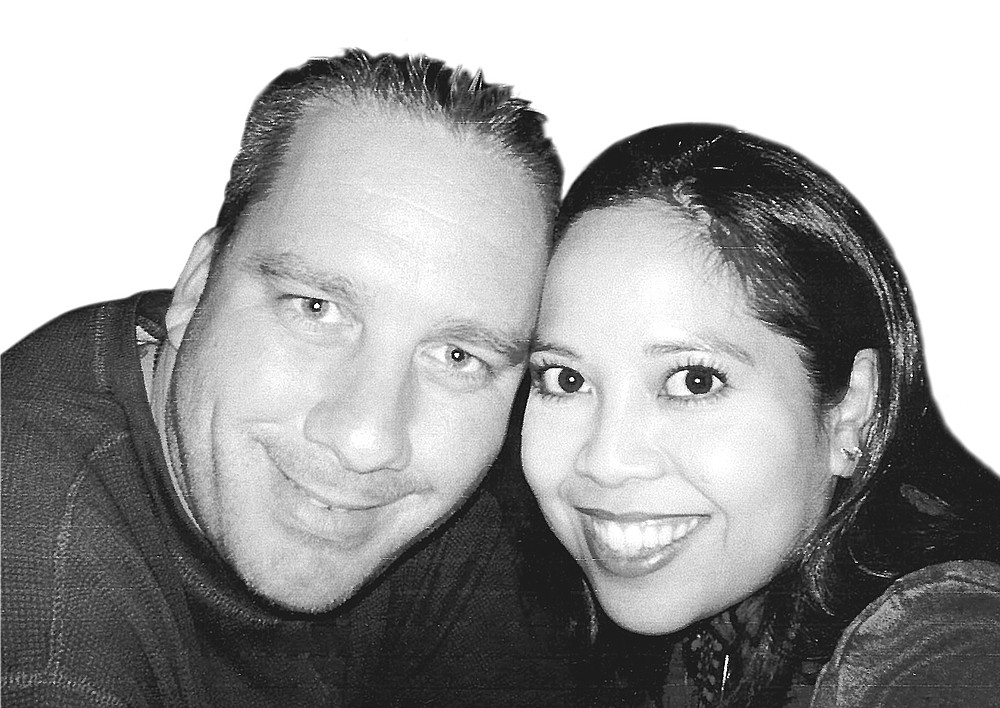 Mr. Allen won over the parents. “I did it with persistence. I wasn’t afraid to talk to them. I just pretended they liked me.” On the first anniversary of their meeting, Mr. Allen took Miss Abitria to the beach at Grandview.

“I wasn’t that excited,” Miss Abitria confesses. “He made me get up at the crack of dawn. We didn’t take any surfboards or swimsuits. We were walking on the beach. I just wanted to sleep in.” 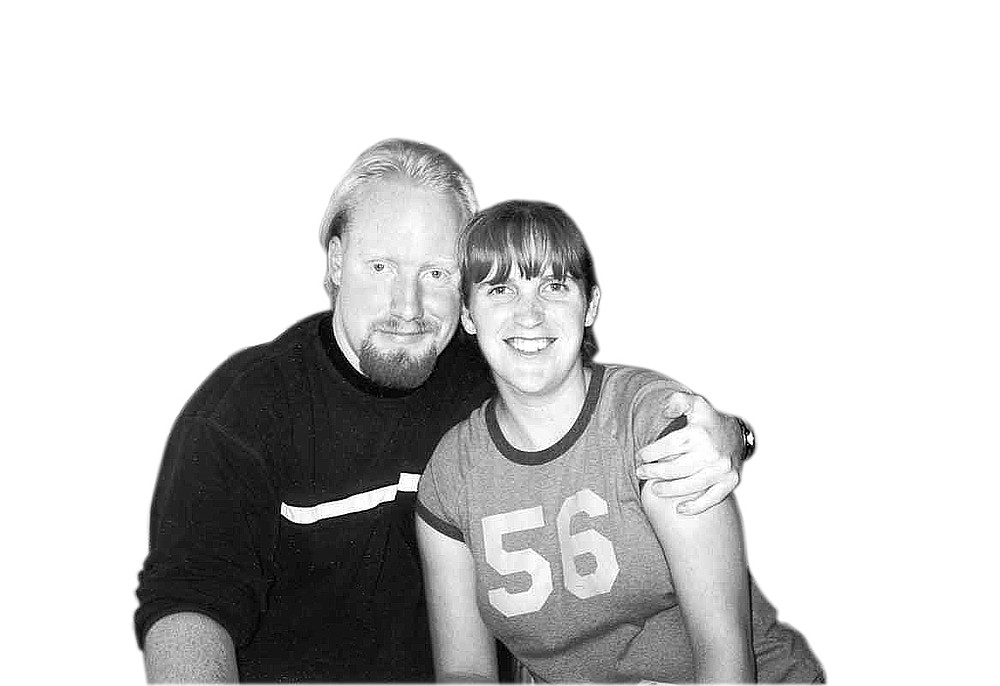 Two years after Miss Johnson returned from Boston, Mr. Beaver popped the question. “I wrote her a poem,” he explains. “We went to La Jolla Shores on a Thursday for lunch. Chinese food again. I sat down behind Deanna and had her read the poem. When she was done, I opened up the box and handed her the ring.” Miss Johnson holds up her left hand to show a princess-cut solitaire shining in a white gold cathedral setting. 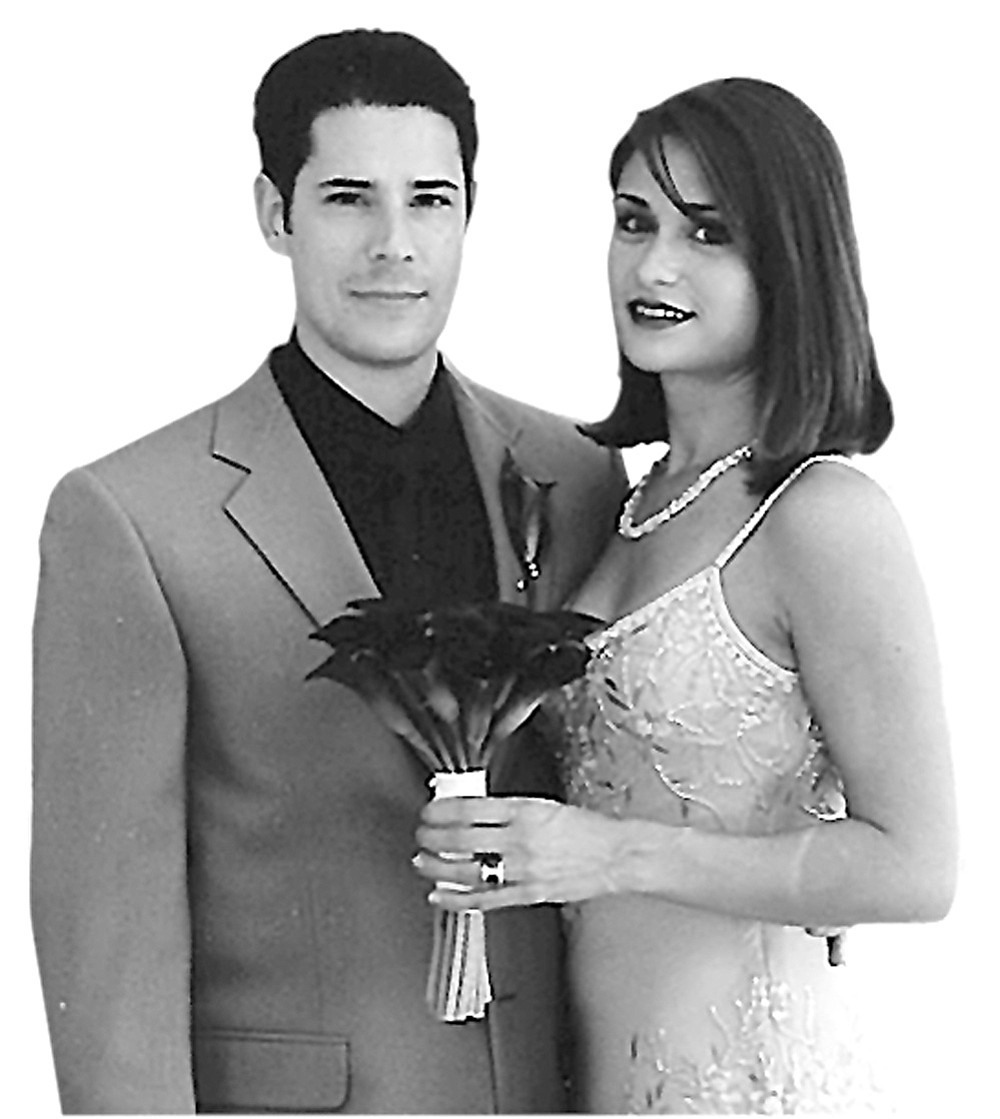 “Brooke tried to telecommute from here to Austin, but it didn’t work out. About the time she lost her job, I was thinking about money and shared money. Merging our Quicken files. I thought, ‘We’ve been dating for a while. We should get married.’ I decided while I was at work. On the way home, I stopped at Target and bought an orange toe ring for 85 cents. Orange is Brooke’s favorite color. I proposed that night.” 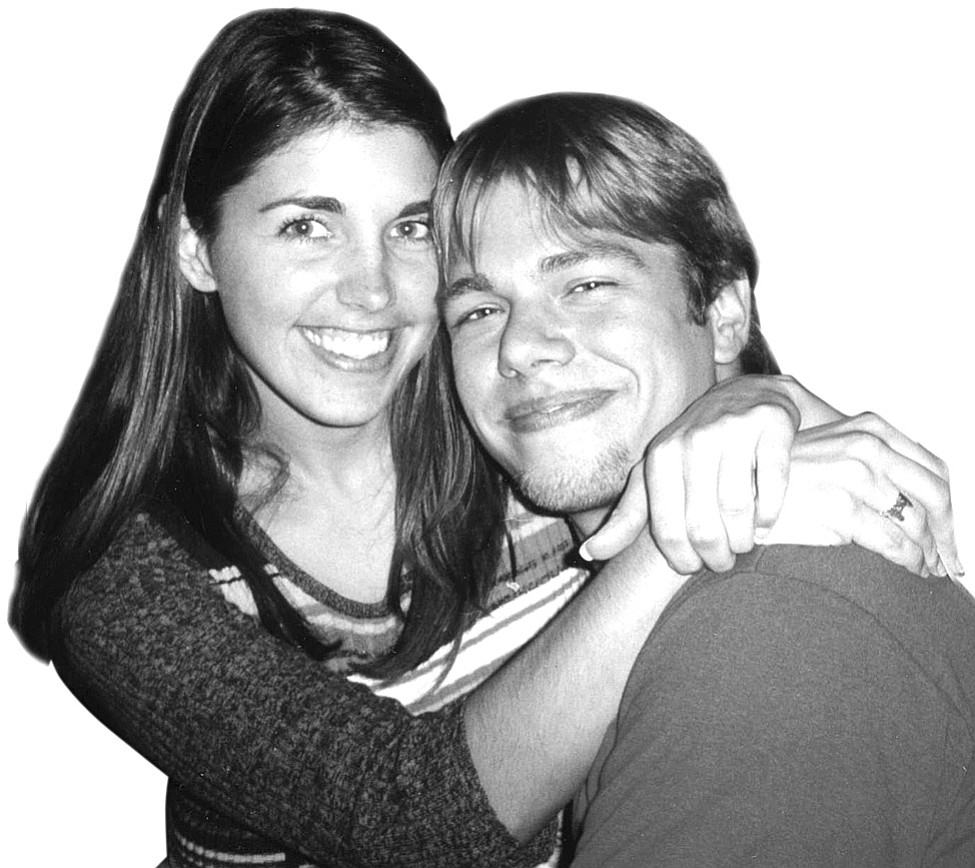 “It was kind of a surprise,” Miss Clark says. “We had looked at rings in November. That was a total surprise. One day, Zach said, ‘Let’s go look at rings.’ I said, ‘Okay.’ We went to the mall and looked at about five or six jewelry stores. At every store, I picked out my favorite ring. But we didn’t buy a ring, and I didn’t know when he was going to propose.” 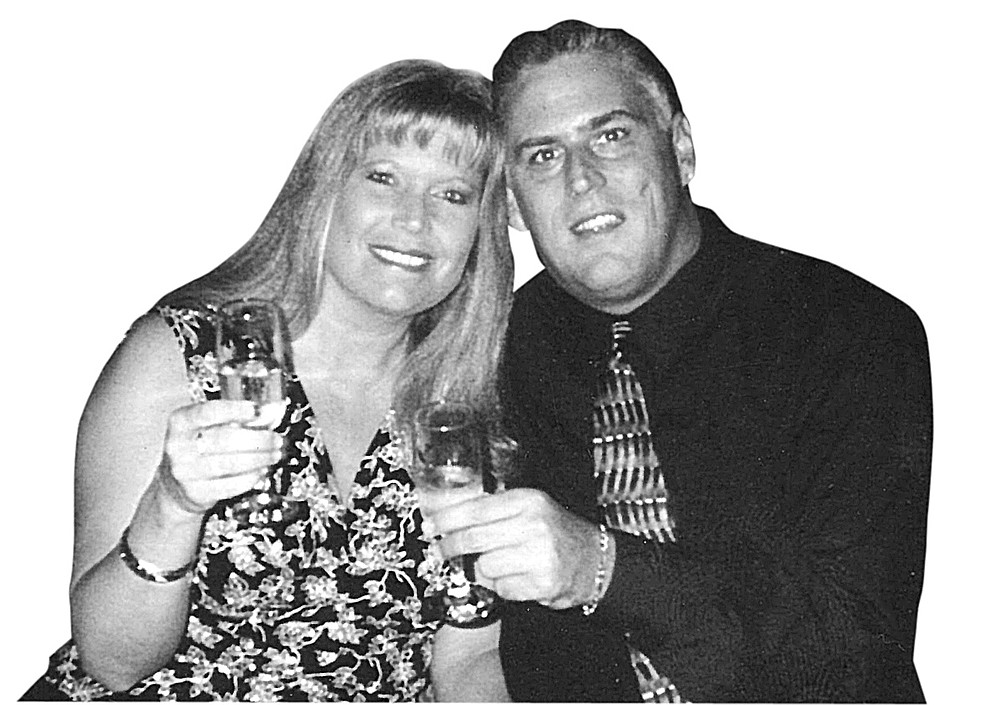 “We went on a cruise for my birthday a little while after that. I was in the bathroom getting ready to go out, and Paul was out on the balcony of our stateroom. He said, ‘Michelle, come out here.’ When I went out on the balcony, I could see he was crying. I thought something was wrong.” “I told her I wanted us to spend the rest of our lives together,” Mr. Galkoski says.