“This is just what we need. Another brewery.” 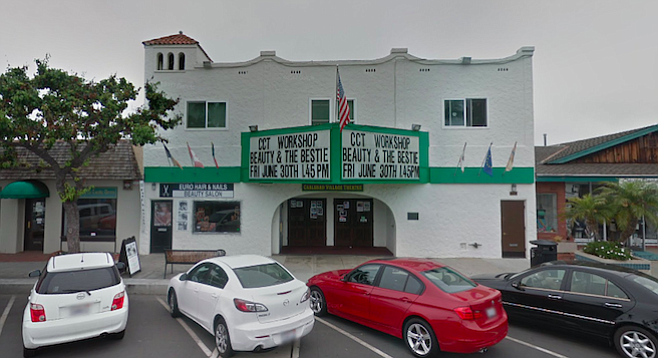 “Where is the historical society?”

That comment appeared February 7th on the Carlsbad Locals Facebook page shortly after the news broke of the sale of the Carlsbad Village Theater.

The 91-year-old downtown theater was Carlsbad’s only theater until the early ’60s. Over the past two decades the theater was often used for youth beauty pageants, athletic awards ceremonies, comedy shows, youth-theater productions, and concerts.

But the Carlsbad Village Theater is destined for a major change of use.

Neighboring businesses say a brewery/restaurant is in the works once the 338 seats are torn out and a major renovation happens. Records show the building was sold for $2.4 million in November to Encinitas-based RPG 2822 State Street LLC.

Other visitors to the “Carlsbad Locals” website have varying ideas. One commented that the 1927 theater was “old and underused and it’s time for a change,” Another said: “We need to stop tearing down perfectly good structures…. Downtown has become unrecognizable.”

Mike Moser, the Solana Beach–based agent who oversaw the sale, says he couldn’t disclose a lot of details unless cleared with the new owners. He says a brewery and/or restaurant are in the mix and that the building itself will not be torn down.

Moser says the new owners want to restore the theater to its “old glory” and that live entertainment and cultural events are hoped to be part of the new project. Moser said the rumor that Ballast Point Brewing Company had bought the building was not true.

While there is a historical plaque from the City of Carlsbad on the building, the building was marketed as “unique historic (non-registered)”; that means the historical status noted by the plaque does not protect it from anything.

City of Carlsbad planning tech Gina Ruiz reports that nothing has been filed with the city regarding any proposed use change to the State Street theater. She said that current zoning would allow for a brewery/restaurant but that a Village Review Permit (conditional use permit) would have to be applied for and approved.

“It’s a shame,” says Sue Ladoucer, a former member of Carlsbad’s Historic Preservation Commission. She said she was on the commission when it gave the theater its historic plaque. “We were hoping that the city council would take the next step and protect those sites [who received a plaque]. But they didn’t do it.”

Ladoucer says she is not surprised by the move, “…based on all the new development that is happening on State Street.”

She hopes that the new owners will take a cue from Pizza Port, which opened the successful beer-and-pizza restaurant in 1995 in another historical building.

“They bought the old Wonder Bread building,” says Ladoucer about the Pizza Port building on [former Elm Avenue] Carlsbad Village Drive. “They kept the entire façade. We were all very proud of what they did. That was an example of doing a good job with an old building.”

Laurie Batter was once president of the Carlsbad Arts Commission. She says ideally the city would have purchased the theater and maybe given it the same life as another historic theater seven miles south.

“They could have made it an arts movie theater like the La Paloma Theatre in Encinitas,” says Batter. “This is just what we need. Another brewery.”

The RPG 2822 entity is part of the RAF Pacifica Group based in Encinitas that is responsible for the recent $24-million acquisition of the 39.000 sq. ft. Pacific Station in Encinitas. RAF says it specializes in refurbishing industrial buildings, and so has been responsible with 2.65-million sq. ft. of commercial property worth $350-million.

A call to RAF this afternoon led to this response: "We don't know what we're goimng to do with it yet."

Interesting comment from T.E Bannan. This is how one person I spoke with this morning responded: "He's basically saying to just throw anything against the wall and see if it sticks. Let's just hope for the best. Why do we even have general plans or planning staffs or planning commissions? Why do we even bother with historic designations? Is carlsbad that overrun with short-sighted, short-fingered vulgarians...by weak newbies who want to whore out our town to any orange county creep?" I could not get her to post that comment herself. That is the best that I could reconstruct it on her behalf.

Beautiful facade. I'm sure they'll save it when they gut the interior. Too bad there's no consortium of community theater groups to use that perfect space.

I am puzzled by your odd comment that there are "quite enough legit theaters in San Diego County already," as if we were over-doing the theater thing. So what, the sky's the limit on craft beer joints? And ignoring historic preservation of unusual old buildings that define a community -- "more perfect spaces aren't needed" -- is a good idea?

I'll buy it for $850k & keep it as a theater, guaranteed, if anyone can talk them into it within the next 7 days.

They will never make their money back unless they turn it into something gross that Carlsbad won't like..trust me.

Tell them to lower the price and sell it to me.

Let me handle the headache.

Anyone makes the deal happen, you get your name on a wall of the theater, for all time, and opening night will be in your honor.