The rise of Papa Soon-Shiong?

Friend of Doug could shift San Diego’s balance of politics 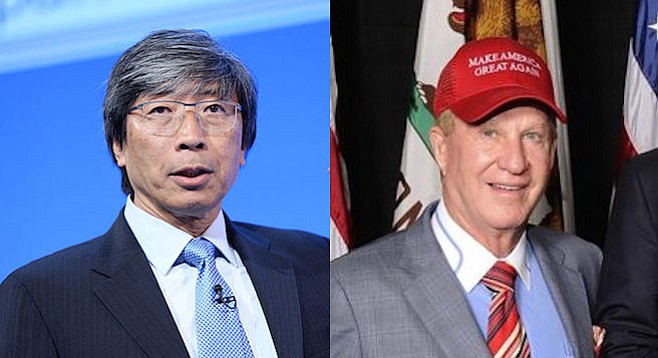 Corks have been popping at the Union-Tribune, judging from the effusive coverage that the paper — newly liberated from its bondage to Chicago's tronc — has lavished on the announcement that Los Angeles mega-billionaire Patrick Soon-Shiong has acquired the L.A. Times and its little San Diego sister.

But one endorser of the transaction reported by the U-T may give local Republicans reason to be especially merry.

"Former Union-Tribune owner Doug 'Papa Doug' Manchester said he talked by phone to the prospective owner early Wednesday. He said Soon-Shiong is currently in Nassau in the Bahamas working on a cancer center project," wrote Diane Bell in a February 8 column headlined, "San Diegans give high praise for billionaire, deal to buy papers."

“He’ll be a fantastic owner and a responsible publisher of both the Los Angeles Times and the Union- Tribune,” enthused Manchester, who turned tidy real estate profits buying and shuttering the North County Times and selling the U-T to a tronc predecessor during his three-year tenure as newspaper baron here.

"Manchester described Soon-Shiong, with whom he has had business dealings, as 'a man of incredible intellect,'" Bell continued.

“‘I offered to do anything to assist him, and we’re meeting in the next week or two,' added Manchester, who bought the Union-Tribune from Platinum Equity in 2012, prior to its purchase by the Tribune Publishing Co., now called Tronc."

"When asked if he thought the physician would be involved personally in operating the newspaper, Manchester said, 'I think he’ll make it the best it can be.' He added that Soon-Shiong ‘has a wonderful and talented daughter who will take an active interest.’

"Manchester was referring to Nika Soon-Shiong, who held two summer internships at the L.A. Times in 2012 and 2013 before completing her bachelor’s degree at Stanford University in international relations, then her master’s degree in African studies, followed by a year as a Princeton fellow."

Though the U-T has experienced what appears to be an irretrievable decline in circulation and advertising under tronc, the paper has stepped away from editorial policies and reporting overtly favorable to local GOP interests, resulting in an unprecedented boost for local Democrats.

In particular, the U-T has been hot on the tail of GOP congressman Duncan Hunter and charges against him of personally pocketing campaign cash for family expenses, and the paper endorsed a 2016 ballot measure that changed city election law to compel November runoffs, widely viewed as a boon to city council Democrats.

Should Soon-Shiong change the San Diego paper's direction — or simply fold it into the new L.A. Times — the city's chaotic political winds might switch yet again, as suggested by the remarks of Manchester, who continues to await Senate confirmation of his nomination by president Donald Trump to become ambassador to the Bahamas.

Like Manchester, Soon-Shiong has reportedly been in to see Trump, apparently to lobby last year for a czar-like position in the administration regarding the nation's troubled healthcare subsidies.

A piece carried by Politico last April questioning Soon-Shiong's financial dealings with the University of Utah drew a Trump-like Twitter response from the billionaire: "Politico/STAT attacks anyone who meets @POTUS to serve USA. Important to give back. That’s why I am doing what I do."

Besides the L.A. Times and the U-T, Soon-Shiong is about to gain control of Tribune Washington Bureau L.LC, which currently supplies the tronc chain with dispatches from the nation's capital. Per tronc's federal securities filing regarding the sale, that asset, along with the Times and U-T, is being transferred by tronc to a new entity to be owned by Soon-Shiong and called NantMedia Holdings, LLC.

The fate of the Washington bureau under tronc has long been uncertain, and its spin-off to Soon-Shiong suggests to critics that he may be willing to subsidize the operation to purvey a flood of news and opinions regarding the pharmaceutical side of his business.

In April 2016, the Washington Post wrote about the bureau, noting that it had begun to produce influential exposes regarding federal agencies. "Perhaps recognizing that commodity coverage is a ticket to extinction, the Tribune’s Washington bureau has done a considerable amount of enterprise coverage, including: An April 2015 project on the Pentagon’s foolhardy $10 billion investment in missile-shield technology; deep reporting on the abuses of Border Patrol agents; and contributions to the Pulitzer Prize-winning coverage of last year’s San Bernardino, Calif., massacre."

I don't think this is going to end well for either paper—or their readers. This guy makes Malin Burnham and Eli Broad look like Roman statesmen in comparison.

It's hard to imagine young Soon-Shiong in medical school, eager to save lives and make the world a better place. Is he serious about cancer research or is he simply collecting grant money? How do newspapers fit in with his other activities? What motivates this guy?

Let's just be grateful for the moment of respite in the downward spiral of the great Los Angeles Times and think only good thoughts about restoring local ownership to that paper as well as saving our own Union-Tribune. I think love of winning power struggles and a sense of public spiritedness motivate Dr. Soon-Shiong to wrest the Times from the death-grip of Tronc's Michael Ferro, his playboy publisher Ross Levinsohn, and vampire editor Louis D'Vorkin. So far so good. No pre-judging, no predicting, let's just wait and see. (Trump says this all the time, so it must be good counsel.) Also, if Soon-Shiong now owns the Washington Bureau of Tribune, maybe we'll see the D.C. columns of former bureau chief Doyle McManus again whose LAT op-ed contributions suddenly ended earlier this year.