A cafe is born 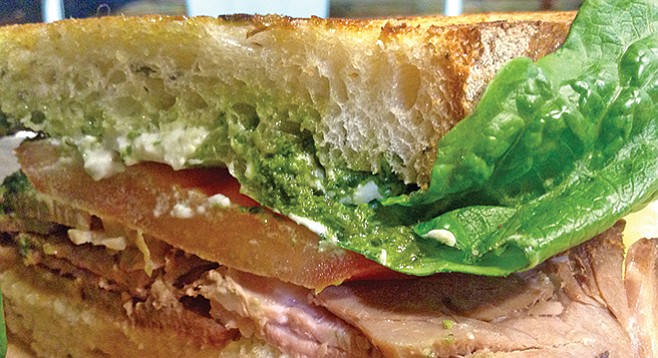 We haven’t quite got things ready,” says Jordan. “We’re working on a small-plates menu and a wine-by-the-glass menu, but we’re not quite there.”

Don’t rush it, I say. Because this is big. We’re here at the birth of a different notion of a café. At least as far as I’ve seen. Like, till now, you’ve had liquor stores that may have added a sandwich deli. So you can eat there, buy your wine and beer inside, but you can’t drink it there. If you’re eating at their tables, you’re drinking Pepsi, joe, or Adam’s Ale. 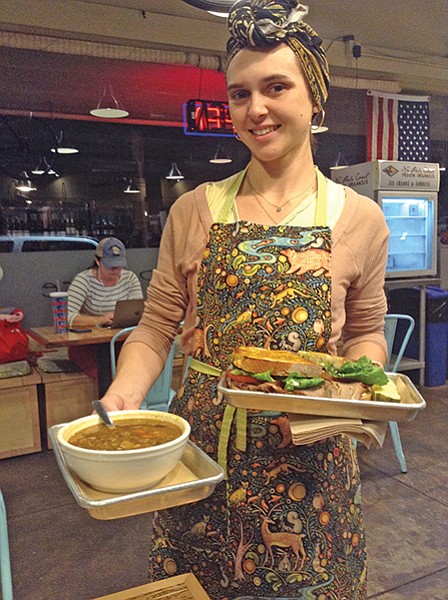 Those liquor-store laws always seemed so crazy to me. But here, tonight, at Grant’s Marketplace, this ancient South Park liquor store at the corner of Dale and Beech streets that grew into a really cool deli, Jordan says you can buy a bottle of, say, one of their wines, open it, and drink that here on the deck outside, or inside. “And no corkage fee,” she says.

Jordan says the new owners, who took over from Joe and Kim Grant about a year ago, are fine with that. 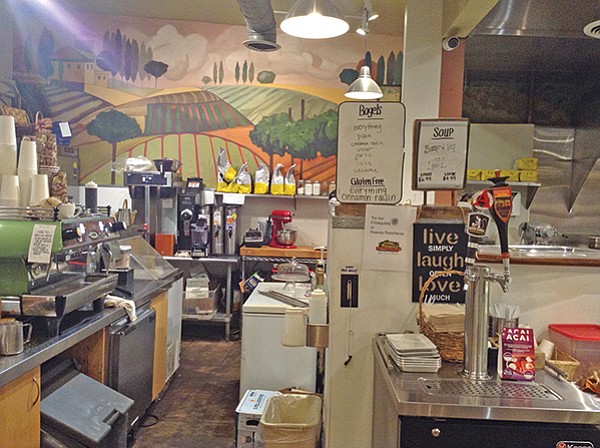 Working kitchen's the heart of this deli-liquor store.

Have I been hiding under a rock, or is this kinda revolutionary? Because, suddenly, what we have here is your classic corner store becoming like a Paris bistro, where you can buy your bottle of plonk, grab your baguette and fromage, and sit down with your long-lost buddy and bottle of wine and actually enjoy life! 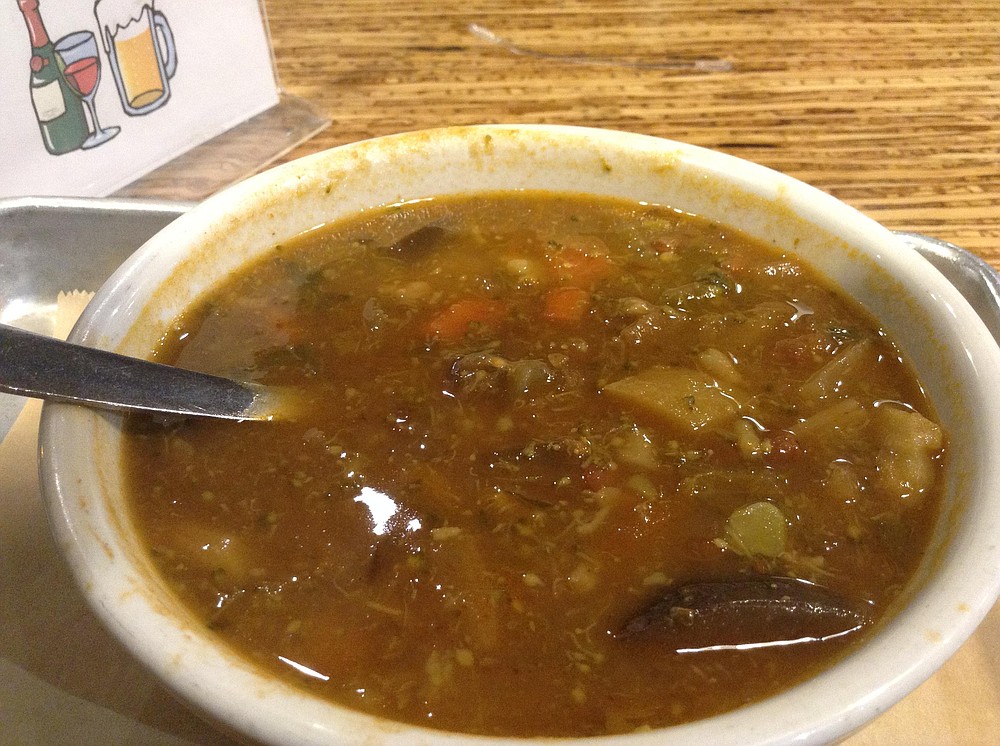 Without hiding in a dungeon like Hamilton’s (okay, love Hamilton’s, but making a point here) or paying 40 bucks for a full meal experience at restaurants such as nearby Kindred or Buona Forchetta.

We’re talking a liquor store you can drink at. 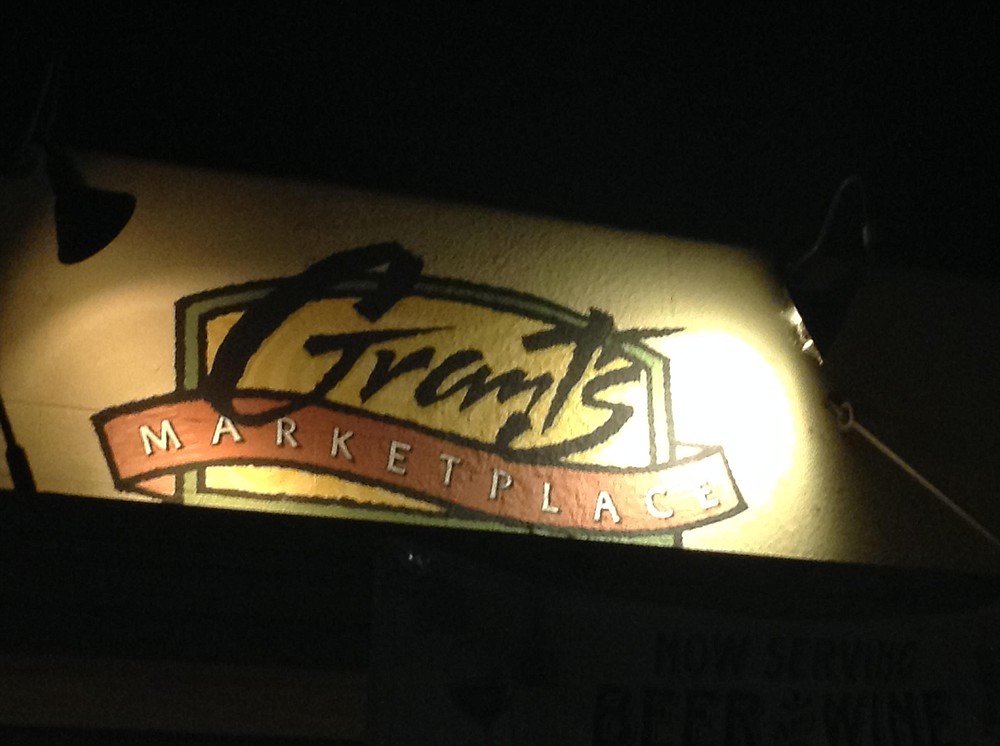 New owners, but signs are the same

I’d actually stopped by Kindred and Buona Forchetta, just because, honestly, they look so cool, especially in the evening light, and I was hoping they just might have a happy hour. No such luck. They’re so successful they don’t need no happy hour. Hamilton’s has great bar nosh, but tonight I’m on the wagon. Work. So I let gravity roll me down Beech past the packed Group Fitness studio to Grant’s corner.

And, yes, change of ownership, but they still have the “ship’s deck” balcony outside, and that mural of fields and groves on the wall behind the counter. So I order a cup of coffee ($2.50, and glad to see it’s Café Virtuoso Certified Organic — fair-traded organic) and take it and a menu to the deck outside so I can see how interesting the food is.

And guess what? Interesting it is. Okay, you’ve got a choice between sandwiches and, uh, sandwiches. Cold sammies and hot sammies. But also a breakfast menu that offers everything from fresh fruit ($7.25, hey, this is South Park) to Morning Glory sandwich with fried egg, bacon, gouda, tomato, onion, arugula with aioli, plus potatoes, for $9.50; to quiche of the day (meaty or vegetarian) for $7, with potatoes. They even do an eggs Benedict for $11.

But mainstream sandwiches are the way to go. Like, the gal at the counter (Jordan’s making sandwiches behind a screen, cutting, swiping, wrapping) says the Josepi Sub may be the most filling. Main two ingredients are Italian sopressata, which — have to ask — is a dry salami from southern Italy, red wine salami, and Tiffany ham, plus cheese and the usual fixin’s. Costs $10. The Californian has turkey, bacon, provolone, and avocado (of course), also $10. Hot sandwiches include eggplant with goat cheese ($9), roasted portobello mushroom with smoked gouda, which sounds good, a roast-beef sammy with BBQ sauce called Smokin’ Joe ($10), and “Leg of Lamb with Pesto” ($10). This comes with “fresh rosemary and herbs, pesto sauce, aioli sauce, lettuce, and tomato” on olive-oil rosemary bread from the Sadie Rose bakery. For another $1.50 you can add goat cheese.

What the heck. I go for the leg of lamb sandwich with the goat cheese.

“Choice is beef veggie soup, but that’s almost gone,” says Jordan, “or a vegetarian one with garbanzo beans, lentils, and veggies like zucchini, celery, kale, or chard.”

Eek. The veggie one sounds way too taste-free for me, but I go for it anyway, if only to help wash the leg of lamb down.

The soup, turns out, is good: rich, tasty, with plenty of potato in there, too.

And the leg o’ lamb sammy is way big and emitting rosemary and olive oil aromas. Pesto flavor’s great, lamb’s tender. One thing I could’ve done with: mint sauce. The other thing? This liter bottle (say, two pints?) of rosé wine — Jolie Folle (“Pretty Crazy Gal”?) — sitting right behind me. Costs about $20. That, for two, plus a $5 sandwich, is doable. Carla’n me could sit out here at sunset, chew, glug, argue, watch the jets cruise into Lindbergh overhead and chuckle at wheezing dogs pulling their owners along the sidewalk beneath.

“So, small plates?” I ask Jordan as she packs Carla’s half of the lamb sandwich.

“It shouldn’t be too long,” she says.

Great. Will that mean a happy hour, too?

We can only hope.