Films to see at the Jewish Film Festival 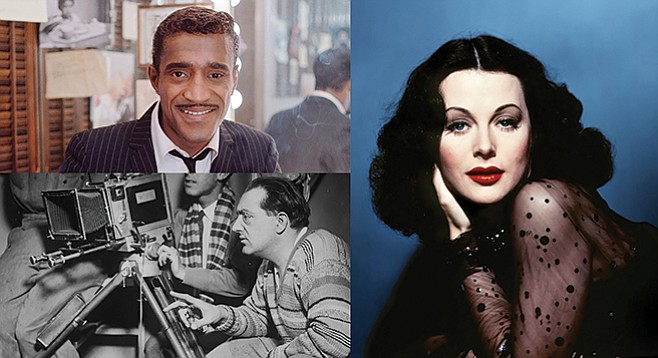 The San Diego Jewish Film Festival puts down stakes from February 8–18 with screenings to be held at Edwards Mira Mesa, Edwards San Marcos, the Lot, and the festival’s home base, the David and Dorothea Garfield Theatre in La Jolla.

A pattern of old Hollywood was detected the instant the festival brochure was cracked. The first films to catch my eye were a pair of documentaries, one based on the life of actress and inveterate inventor Hedy Lamarr, and the other on the hardest working man in show business, Sammy Davis Jr. Add to that a documentary-style account of director and film-noir architect Fritz Lang as he painstakingly researches his first talkie, M, and we have this week’s column.

Mention the name Hedy Lamarr and anyone who has seen Blazing Saddles will smile and say, “That’s Hedley!” Despite having over 30 features to her credit — including Samson and Delilah, the second biggest grossing film of the decade 1939–1949 after Gone with the Wind — it was Mel Brooks who brought the actress eternal fame and instant recognition. Bombshell is out to set the record straight.

She was 18 when she grabbed headlines for famously appearing sans clothing in Ecstasy. (Lamarr was the first actress to appear nude in a “legitimate” feature.) The Czechoslovakian film caught the attention of Louis B. Mayer, who put her under contract in 1939. Many of the films she appeared in are instantly forgettable. Cast solely on the basis of her looks, Metro had little faith in her acting skills. As well they should. As an actress, Hedy Lamarr was a brilliant inventor.

But other sorts of creativity came easy for Lamarr. “Wi-Fi and Bluetooth — that’s my mother’s technology,” says her son, Anthony Loder. During World War II, the actress came up with a way of frequency-hopping that made it impossible for the Germans to jam the signals of radio-controlled missiles.

Perhaps the films biggest revelation is Hedy Lamarr was Jewish. The actress spent a lifetime denying her heritage. Not surprisingly, her real-life exploits are more fascinating to observe than many of the plots Metro’s story department saddled her with.

No other performer in the history of entertainment earned the right to be called Mr. Entertainment more than Sammy Davis Jr. He could sing, dance, act, do impressions, and other than the Candy Man, who looked better draped in a thoroughbred-blanket sports coat topped with a Flying Nun collar and lapels wide enough to seat six?

He was also endowed with a sense of over-theatrical theatricality that was at once suffocatingly annoying and satirically contemptuous to behold. His short-lived series Sammy & Co. was the basis for SCTV’s devastating talk-show satire, The Sammy Maudlin Show. His patented move was reacting so wildly to another performer’s joke — slapping his knee and screaming before hitting the deck like a sack of flour — that he essentially upstaged the competition.

Many African-Americans looked down on Sammy for what they perceived to be his Uncle Tomming. (Embracing Richard Nixon didn’t help, but hey, man, Sam was a hugger.) But Davis experienced racism from the top. His marriage to a white woman caused JFK to ban him from appearing at a White House gala. While headlining at the Sands in Las Vegas, the hotel was forced to drain the pool after Southern guests spotted Davis taking a swim.

More ado is made over Sam’s racially mixed marriage of defiance to May Britt than his wife of 20 years, Altovise. (Alto is seen in stock footage, but I don’t once remember hearing her called by name.) And discussion of his addictions to coke and booze is consigned to a 30-second clip from Arsenio. Still, if you’re a fan of the man, man, this is a must-see.

It’s 1929, and with the days of silent pictures numbered, a reluctant Fritz Lang must come up with a fitting subject for his first talkie. How about the tale of a serial killer known as the “Vampire of Düsseldorf” and currently targeting women and children, as seen in the mind of a filmmaker whose “research work” includes snorting cocaine and raping prostitutes in hallways? Conjecture, anyone?

Of course the picture up for discussion is M, the story of a child-killer, played with a certain degree of sympathy by Peter Lorre. His character is so heinous that in order to prevent a bad reputation from worsening, the criminal underground steps up and does the work of the police by solving the case. Lang was nothing if not perpetually ahead of his time.

Even with his monocle firmly in place, actor Heino Ferch looks nothing like Fritz Lang. But considering how far out of the way the film goes to massage the truth, it was easy to give the actor the benefit of the doubt and enjoy his characterization.

Shot in the Academy Ratio (the standard for all films produced prior to 1953) and black-and-white, Gordian Maugg’s Fritz Lang is at times sumptuous to behold. Still, Maugg is far more resourceful when it comes to fabricating the past on paper than he is on screen. The problem being, in his attempt to give his film a documentary feel for the period, the director utilizes newsreel or stock footage from movies of the day as bridging sequences. The stitching of the undercranked archival footage with contemporary recreations is far from a seamless, Zelig-like experience.

Much of what passes for fact-finding here was later refuted by Lang, but that doesn’t stop director and co-writer Maugg from pursuing his story with straightforward conviction. If it isn’t all true, it should be!

For a complete schedule of times and titles: sdcjc.org/sdjff.

So excited for this Festival. You definitely don't have to be Jewish to enjoy the diverse range of films.