The faction of San Diego artists who work in textiles 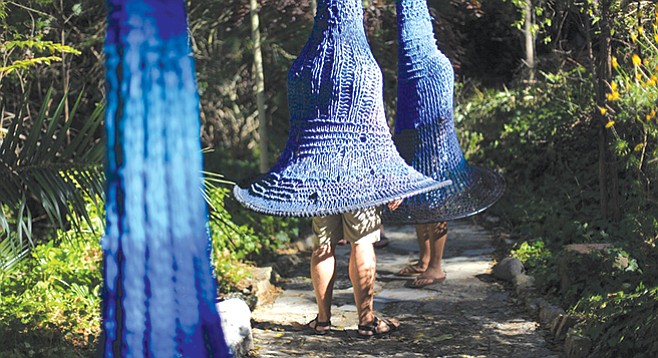 Whether it’s oil painted on canvas, a photograph printed on paper, or a dance performed on stage, an artist’s medium is chosen because it best suits the message the artist intends to communicate. And for one faction of San Diego artists, the chosen medium is textiles. 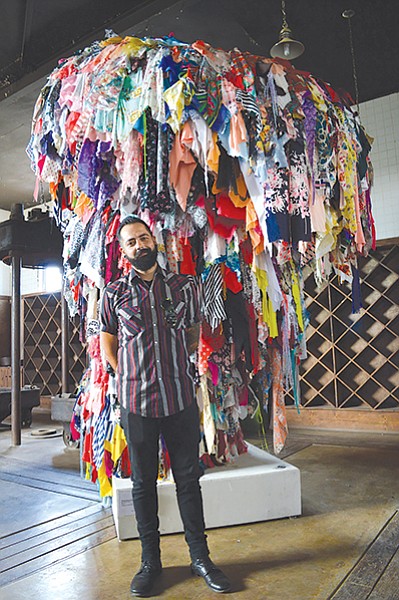 Daniel Barron Corrales has been helping his family buy and sell fabric at the Spring Valley Swap Meet since he was five years old.

Fiber artist and teacher Michelle Montjoy was first drawn to textiles because, as she says, “these materials come loaded with content.” Whether it’s “used T-shirts, medical gauze, or old hankies,” every material Montjoy uses in her work “speak of human labor.” Montjoy’s knitted installations — giant, indigo, bellflower-like shapes — were recently on display at Oceanside Museum of Art and Ship in the Woods. She is currently working on another installation that will be part of the San Diego International Airport’s yearlong exhibition, Figure of Speech.

Nostalgia is a common thread among artists drawn to textiles. Daniel Barron Corrales, the artist in residence at Bread & Salt art center (1955 Julian Avenue, Barrio Logan) beginning in April, has been helping his family buy and sell fabric at the Spring Valley Swap Meet (6377 Quarry Road) since he was five years old. His affinity for the use of textiles in his sculptures has to do not only with the material itself, but with his associations to it. “The swap meet in general is something that affects my work — that aesthetic. It’s colorful, vibrant, alive, breathing; it’s a never-still community,” he says. Aside from the common misconception that relegates textile art to “craft,” Barron Corrales often encounters misconceptions about his gender. “It’s weird, like they either think I’m a woman or they think I’m gay,” he says. Though, he laughs, “The funny thing is, the textile industry is male-centric — all the people I interact with are mostly male.”

Architect and artist Robert S. Leathers, who is also the cofounder of Space 4 Art (340 16th Street, East Village), is known for the hand-dyed fabrics he stitches into the art quilts he’s been creating for 25 years. In one ongoing body of work, Leathers machine-stitches dream-like portrayals of “mankind’s built environment intruding into nature.” Some of his scenes are reminiscent of double-exposed photographs, with natural elements such as foamy ocean water partially obscuring manmade steps. In 2008, he created an orange, black, and brown quilt that depicts the blaze and rubble that became of the home he lost in the Jamul Fire the year before.

Charlotte Bird also stitches stories into quilts. Her colorful depictions of nature, mythological goddesses, children’s stories, and abstract designs are visually contemporary despite what many consider to be a traditional medium. Bird’s art quilts are not intended to live at the end of a bed, but to be hung on a wall. One of her quilts — a monochromatic scene using shades of steel blue — depicts a starry night, a mountain range and, in the foreground, the silhouettes of three bunnies, all facing left toward three scraggy, leafless trees. This quilt, available at Sparks Gallery (530 Sixth Avenue, Gaslamp Quarter) for $3526.68, is described by Bird, “Below the south side of Cathedral Mountain, varying hares watch for lynx and expect the thin sunlight of a subarctic February morning.”

In 2015, a group of textile artists came together to form the Textile Guild of San Diego, an all volunteer nonprofit. On the third Tuesday of each month, members meet to “Stitch in the Park” from 10 a.m. to 1 p.m. at the Plaza de Panama in Balboa Park. Aside from their regular meet-ups, the guild also hosts classes for all sorts of textile-related techniques, including handmade lace, embroidery, and silk painting.

Though many textile artists show their work in galleries and art museums that feature work of all kinds, there is one museum in San Diego that is dedicated to contemporary art quilts and textiles: Visions Art Museum in Liberty Station (2825 Dewey Road #100). Visions began as a nonprofit arts organization in 1985 and remained a community without a home until 2007. Now the museum hosts 20 exhibitions a year, featuring contemporary textiles works by artists not only from this region, but also from around the country.

Of herself and her fellow fiber artists, Michelle Montjoy says, “It’s hard to say we are ‘textile artists.’ I think we are way beyond being defined by the material we use to make our art, and the overlap of different mediums is exciting and super interesting.”