The National City Education Teachers Association has not yet declared a strike, but negotiations with their district have hit an impasse. The union cites lack of materials and heavy workloads as the prime issues. 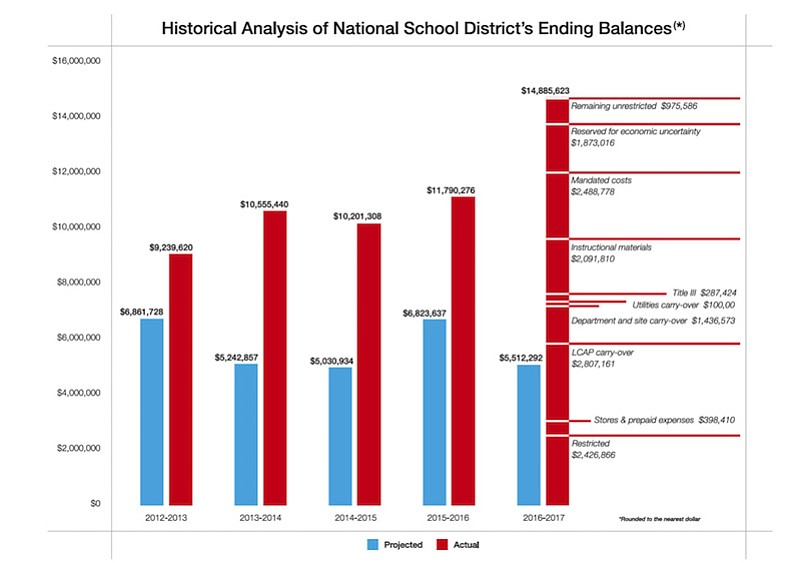 Christina Benson, president of the group, explained in a phone interview that teachers have been boycotting the district committees, such as language arts, math and curriculum, because they say their voices aren’t being heard.

The union held two rallies. On December 18th approximately 150 people stood outside district offices chanting and holding signs while a meeting took place with the mediator to discuss the impasse. A second rally took place on January 10th during a board meeting.

“Unfortunately, it doesn’t look like the school board is budging,” Benson explained.

Teachers next decided to take their concerns directly to parents. On Tuesday, January 30th Tamlyn McKean, the group's organizing chair, gave a presentation at Palmer Way School in which she explained that there’s been a budget surplus for the last four years, but the district isn’t spending the money. For the 2016-2017 school year, “They said they were going to end up with $5.5 million. They ended up with $14.8 million. That’s 170% off of what you said you were going to spend. So where’s the money going?”

Although Superintendent Leighangela Brady was not available, a district spokesperson provided a budget slide that Brady presented during her State of the District address. The slide showed that for 2016-2017 the district had left $1,873,016 in reserve.

McKean said, “They’re reserving 16% when the state says you have to reserve 3%.”

One parent whose son attends Lincoln Acres School said, “I’ve donated paper. I’ve donated pencils and I do it out of love because I know all the students need it and not every parent can actually provide it for their children. But I think it’s ridiculous that the teacher’s have to dig into their own salary to provide materials for our children when the district has this amount of money. Where is it all going? How much are they paying themselves?”

A public records request found that Superintendent Brady receives a salary of $200,349, which is considered competitive, per a U-T article published in September 2017.

McKean went on to display a graph of books and supplies where the district set aside $10.5 million for 2016-17, but only spent about $3.7 million. “We don’t have the materials we need. They have the money. They say they’re consulting with us, but they’re not.”

Thelma Sanchez agreed, telling other parents that she volunteers in a kindergarten classroom at Central Elementary. She was shocked to find that her grandson’s teacher has no curriculum available to her. “They have to make their own.”

But in an email, Christopher Carson, assistant superintendent at the district, contested the claim over a budget surplus for books and supplies. He wrote, “This graph contains materially misstatements of fact. I have not reviewed all relevant documents, but unequivocally can state that the 2016-17 adopted budget is $5,039,904 (unrestricted and restricted), not $10,490,796 shown. Additionally, the adopted budget for 2017-18 is $3,515,641 (unrestricted and restricted), not $10,490,796 shown.”

Teachers at National Elementary have also experienced increasing workloads. When the teachers group took a survey in November 2017 asking teachers if their job requirements were taking a toll on their private life, 77.5% answered either usually or constantly. Another 77.6% said they were usually or constantly overloaded at work.

Molly Sterner, a third grade teacher at Rancho de la Nacion said, “Could you get away with this in Carlsbad? Parents are working three jobs. They’re second language learners and we have, obviously, documentation issues. Parents aren’t going to push back on anything and they’re taking advantage of that.”

Nevertheless, the group hopes parents will write letters, call trustees and join them on February 28th at the district’s board meeting. McKean said, “We want to bring a sack load of letters and pour it on their desk on the 28th. We’re going to have signs. We’re going to be walking. Now is the time for civil disobedience. When we’re at the meetings, we’re not going to be polite. When they say things we don’t believe in, we’re going to say no.”

It seems that teachers are expected to work for less with reduced benefits while providing school supplies and are expected to take on extra curricular duties with no pay. The problem is not the teachers but the bloated overpaid administrators and useless school boards which take away money from the classroom for their own pet projects.

The teachers are listing somethings twice in the $14 million calculation. Restricted balances are not reserves and have been counted by the union. My guess is they know their calculation is faulty but since it brings pressure on district top brass they go with it.