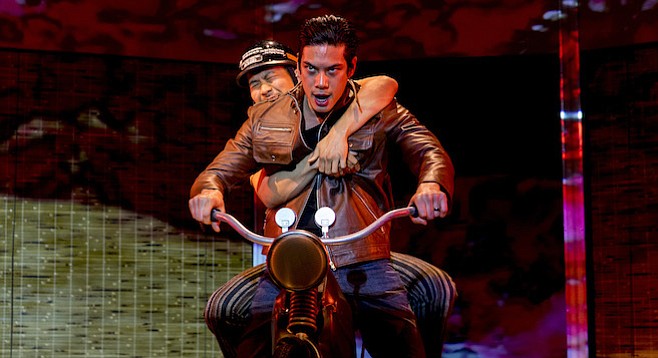 There will always be boy-meets-girl and girl-meets-boy stories. However, I think it's safe to say that the genre is experiencing some fatigue.

What better way to shake it up then to put the boy and girl in a refugee camp in the middle of nowhere and incorporate a fish-out-of-water element along with some hip-hop culture? American playwright Qui Nguyen has given us exactly that, and it is based on the experience of his parents.

A good story is a good story regardless of its fiction to nonfiction ratio. And Vietgone is a good story. It is also a further development in the Americanization of America. The stories of Asian refugees and immigrants and second generation children are starting to become woven into what it means to be America.

This story is set in a refugee camp in Arkansas in the mid 1970’s. In case your history classes have receded into the hazy distance of your youth — as did mine — in 1975 the American military evacuated Saigon and settled thousands of refugees in camps in America.

One such camp existed in San Diego County at Camp Pendleton. Should you ever wonder why there is a strong Vietnamese community in San Diego, this would be your answer.

How many times have you listened to someone complain about their circumstances and wondered, “Why don’t they just leave?” Just leaving sounds simple, but for tens of thousands of years to leave the confines of the group meant certain death. It’s safer to “just stay,” but that’s not a good story — even though it’s based on a real story.