The memory of swordfish 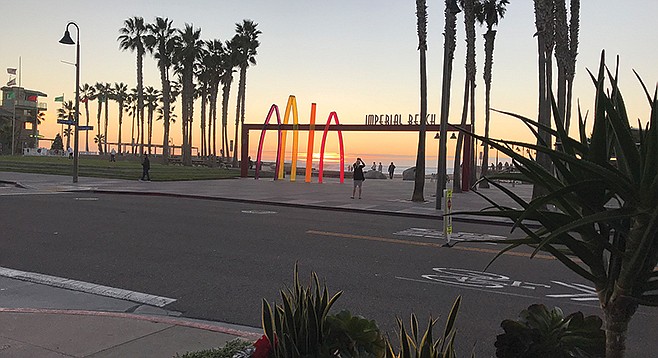 The waves crash as if this were an episode of Poldark. Sun and spume glint through the colored plastic surfboard sculptures, here at IB’s Portwood Pier Plaza. 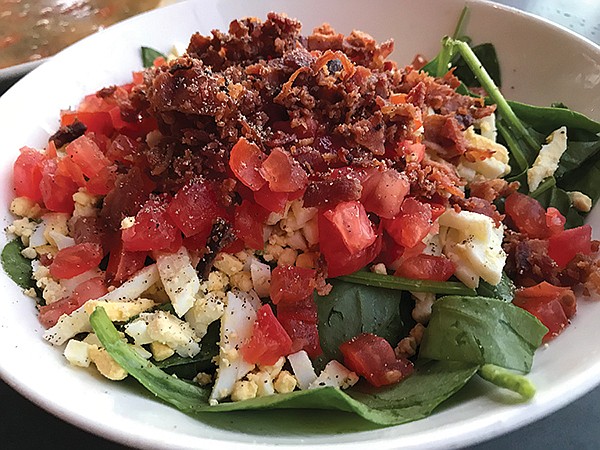 Kevin’s my buddy. Lives down here, at least till the new year. Guy doesn’t need this kind of pressure. So I thought if we got together to talk, we could brainstorm at least.

But at the Brig? Normally, I’d never have come here, because it’s gonna cost you. They have eight eateries, including one brewery already, plus that grand restaurant they’ve planned for the Embarcadero where Anthony’s Fish Grotto once jutted out over the water. 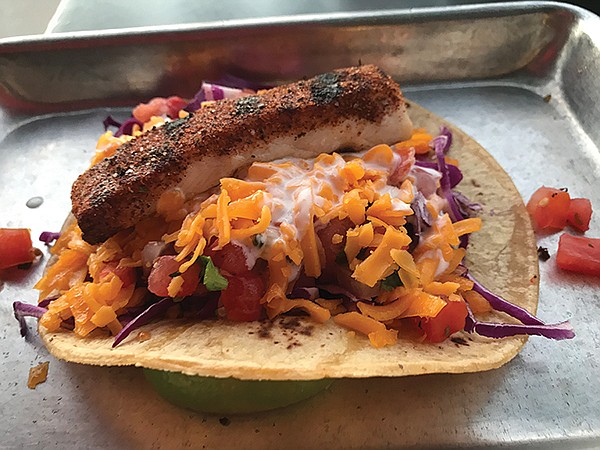 Kevin’s swordfish taco: it’s all in the seasoning

Meantime, IB is Brig’s newest venture. Open less than a year. And it shows how money’s coming to IB. Menu items here go for maybe $16 for a burger, and who knows what for their daily fish catch. Plain ol’ fish and chips is $20. Of course they have cheaper dishes. Calamari sandwiches go for $12.50. But generally, it’s up there.

So, I was looking for somewhere else Kevin and I could talk and afford to chow. But when I passed by this brand-new-looking Brig again, I jes’ had to follow a shaft of sunlight inside.

“And this is Monday, so happy hour’s all day, from three till close.” 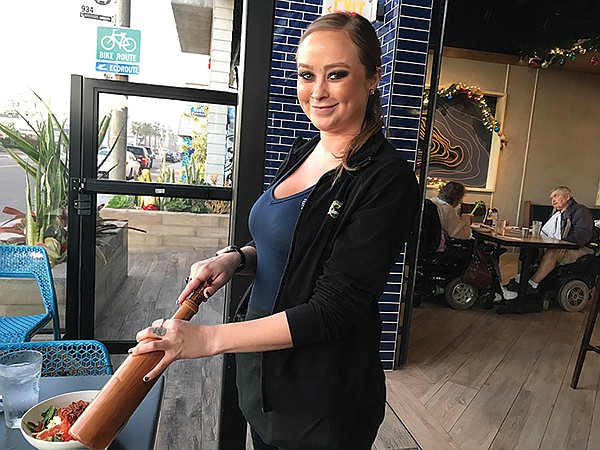 Also good: you can sit anywhere, even though you’re just a happy hour customer. Except the outside patio’s full right now. So we take a seat inside and stare at the HH menu.

Kevin’s got to watch the fats and sugars, so he goes for the grilled swordfish taco and the spinach salad. Me, calamari strips, natch, artichoke fritters, and the soup. I go for the chicken and rice, but a little voice says I should’ve gone for the clam chowder. Seafood’s their thing here.

“How is it?” I say. Kevin’s shaking his head. “This is deceptive. It looks small, but it’s dense. It looks like crumbs on top, but there’s blackened seasoning there too. It’s brilliant. Subtle. Very filling.”

He lets me grab a small forkful. Oh yeah. Spicy but not tongue-killing. There’s just enough to give the white flesh a come-hither taste.

So I start off with my rice soup. Okay, plenty of carrots, spuds, onion and celery, and a lot of chicken. But a little salty for my taste. And not that interesting. The little voice was right: shoulda had the danged clam chowder.

The artichoke fritters, on the other hand, are big, crunchy, generous, artichokey, and made more interesting when you squish lemon onto them and dip them in their pot of lemon aioli. The ten pieces are too much. Kevin helps me out while I get into the calamari. Standard crumbed, but it’s good that the cocktail sauce has horseradish mixed in, to add kick. Also, the pot of jalapeño and cheese dipping sauce brings a nice second taste.

Kevin makes it through his big bowl of spinach salad lickety-split. Says the bacon bits on top save it from being too, well, spinachy. It’s a deal for $4.75.

Of course we don’t do any grog. That would up the bill a lot. Pity, because they have Brig’s new “Ketch” brewery up and running in Point Loma and sending a lemony IPA, which is a hoppy-but-bright brew for our sunny city that I’m kinda keen to try.

Fact is, as the new year’s coming up, we both have to watch our wallets. Specially Kevin right now, with eviction hanging over his head. “Have you tried Craig’s List?” I ask. He laughs. “I scoured that for hours. Next day, only three of 40 places I found were still there. It’s crazy!” It seems San Diego has only built about 10 per cent of the low-income housing it promised eight years ago, but 60 percent of housing is for those who earn $100K or more. “Top 5 percent! That’s all they care about,” says Kevin.

We’re both slurping our waters. Sun is suddenly gone. Cold breeze ruffles through. The overhead heaters rosy up. “Here, finish this,” I say, shoving the calamari over. But he shakes his head. “That swordfish did it for me. Don’t want to spoil the memory.”