Shell takes over from Chevron as most expensive 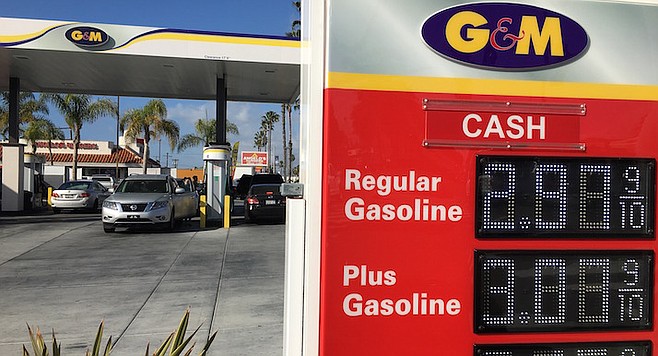 Southern Californians are driving more this holiday season, as evidenced by an unusual post-Christmas Day traffic jam on December 26 through Camp Pendleton south to Del Mar on I-5. It was bumper-to-bumper most of the day. Lowering gas prices must be a factor. 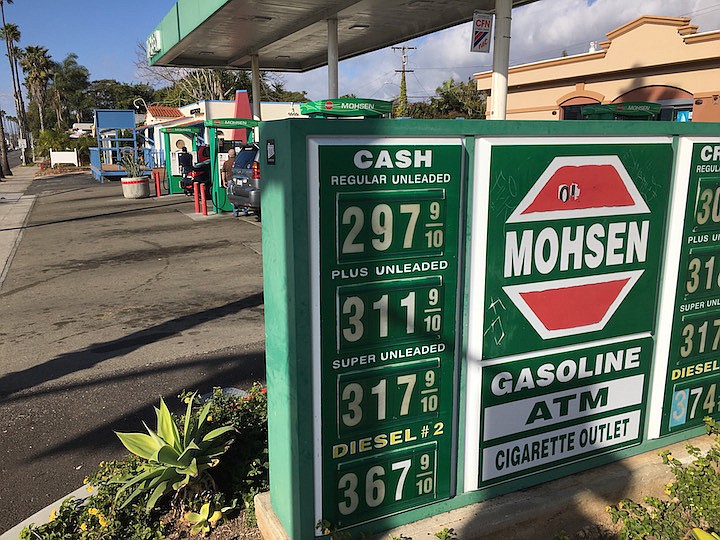 Two Mohsen stations in Oceanside have recently been in a price war with four Oceanside G&M stations.

Since October 10, when the average price of gas in San Diego County was the highest since June, 2015 – $3.85 for regular grade, cash price – San Diegans have enjoyed a 50-cent per gallon drop. The noticeable decreases started the Monday after the Thanksgiving weekend.

On December 27, nine stations, all independent or big box retailers, were selling regular gas under $3.00 a gallon, according to gasbuddy.com.

Always one of the low-price leaders, the Noil station on Cactus Road at Otay Mesa Road was the lowest at $2.88 a gallon, followed by several Costcos around the county at $2.89 to $2.95.

Two Mohsen stations in Oceanside have recently been in a 1950s penny-for-penny price war with four Oceanside G&M stations. Posted at $2.97 in the morning of December 27, G&M matched Mohsen’s price by the afternoon.

Selling for much more than the county average, three Shell stations were tops; India Street at Vine Street in downtown at $4.29, Pacific Highway at Laurel Street (always priced to take advantage of last minute fill-ups for rental car returns at the airport), at $4.19, and the Sierra Mesa Shell on Health Center Drive was reported at $4.19.

Could lower prices be in San Diego’s future? Maybe. The San Joaquin Valley leads the state in the top 15 lowest priced stations; five stations in Lemoore (half way between Bakersfield and the Bay Area) posted the state’s lowest prices, at $2.20 to $2.45 a gallon.

According to a December 26 Bloomberg News report, this round of falling prices is because “America is exporting a record amount of refined fuel, contributing to a global glut in gasoline.”

They charge $3.89 because people will apparently pay it.

ARCO branded gas is generally expensive gas. AM/PM stations which are branded with ARCO gas, are marketed as lower in price. The make more money from the convenience stores. Cheaper gas, more customers inside.

When ARCO eliminated credit cards at their stations many years ago, it was to position themselves as a discounter. For a long time you could count on them having a price lower than the other majors. Recently, however, that has changed. The pay-at-the-island cash machines are gone, and that means at least one trip inside--often requiring a wait in line--if you want to use cash. So, do they now take credit cards? Even using a debit card at ARCO carries an added fee. Here in Vista we have a G&M station across the street from ARCO, and it keeps its price lower than the ARCO. I have a credit card that pays back 3% on gasoline purchases. For me going to ARCO is a non-starter.

Many gas stations let the payment machines go into disrepair so you have to enter their store (and be tempted by crap) to pay for your gas. You have to return again if you overpay to get your refund. They don't replace the paper in the receipt rolls in the outside kiosks either, so if you want (or need... for reimbursement or tax purposes) a receipt you also have to schelp back into the junk food and vice hole to ask for one.

Gas stations like Chevron or Shell sell gas to people who have no choice, like people traveling through the area, or stupid people who think that a particular brand is better. Unless I am traveling in an unfamiliar area I plan my gas stops at stations that sell gas at a reasonable (for California) price.